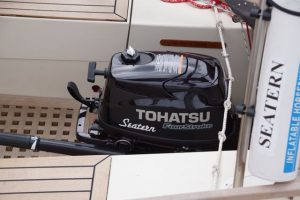 Woke up in Seatern (I sleep in her quite often) to a sunny morning and shipping forecast of wind S to SE 3 to 4, occasionally 5, but with the tide about to disappear (LW around 0830, HW around 1500 on). On spur of moment decided to leave on the early tide to run in the engine a bit more; threw stuff into boat and left jetty around 0600. Stopped motor just past the “Quay 2000” flats to sort out equipment, get mast down, etc. Motored to Chessel Bay using integral tank, sorted out mast and sails and left under motor and main tank at 0700. I headed down the east side of Southampton Water between the large and small greens (large green buoys mark the main shipping channel, smaller greens mark the edge of the inshore route).The throttle was hardly open but I was making nearly 4 kts over the ground into a strengthening SE wind (perhaps half a knot being favourable current). Using the tiller pilot, I had breakfast on route. 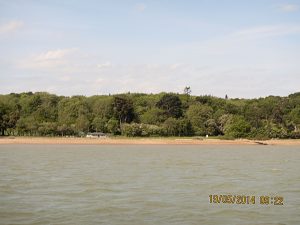 I decided to motor across to Osborne Bay since, if the new outboard failed, it would be a broad reach back. Given it was not that long after low water I went up the North Channel a little way before heading across the Solent. However the wind was still freshening (over 20kts relative) and there were some short steep seas over the shallower areas. Seatern slammed quite a bit and would have been much happier under sail. However I was more than impressed at how the Tohatsu powered her along, still using very little throttle! I coudn’t have done it with the Torqeedo. It seemed like I was in a bit of a tide race, which I was not expecting in the eastern Solent! However I realised afterwards that the brisk SE wind would have been against about a knot of current with only a few metres depth. After an uncomfortable 45 minutes I reached Osborne Bay at around 1012 and anchored. 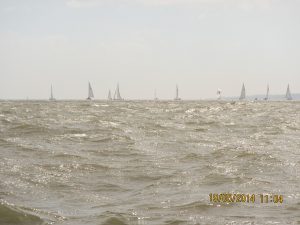 Rough water makes me hungry so I had an early lunch before leaving under jib and mizzen. It was a very broad reach across the Solent and I estimated force 5; however I was being distracted by a fleet of Sun Sail boats racing towards me with spinnakers set. Fortunately they rounded an invisible mark before they engulfed me! Running before the wind in the more sheltered Southampton water I was frequently doing 5 kts GPS (helped by at least 1 kt current) and measuring 15 kts relative wind – suggesting more than an “occasional” force 5. Without the main sail set and in no hurry, I let the tiller pilot steer most of the time. Reached the Swinging Ground buoy around 1355 and hove to to get the sails down; motored up the Itchen to Chessel and anchored there at 1440 to get the mast down. Left Chessel 1455 and was at jetty by 1525 – all secure by 1600… Track plots and trip photos [Duration: 10 hour 18min; track: 25.7 nm]

Outboard use: 1hr 40min Sunday; 4hr 50min today; 6hr 30 in total so far. Total running in period needed is 10 hours. I need to start using full throttle sometimes but I imagine Seatern will be at hull speed and making a lot of wash!