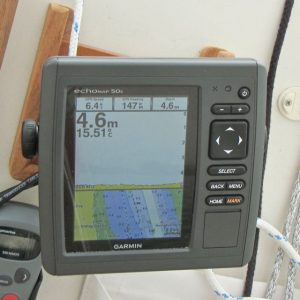 I’ve reached the point where the Tohatsu needs to be used at full throttle as part of it’s “running in” so, not wishing to make lots of wake in the river, I motored down to Southampton Water and had a “burn-up” along the Hovercraft testing area! It was a calm day so good for speed assessment. At full throttle the fasted GPS speed was 6.4 kts (photo left!) which was probably about 6 kts through the water. For a 20 foot boat the hull speed is about 6 to 6.7 kts depending on which formula you use. Seatern had her ballast tanks full and all the “cruising” gear on board (i.e. including inflatable boat, water, food etc.) so was unlikely to plane!

The plot shows how the speed varied during the trip. At full throttle I reckon she did 6 kts, but at 3/4 throttle she did not slow down much – well above 5 kts. That suggests that much of the power at full throttle was going into creating waves. 4kts is achieved with less than half throttle and at “tick-over” she is still doing around 2 kts. I think this is all good since there seems to be power available should I end up motoring into a strong wind and waves on some occasion.

[trip duration: 3hrs 5mins; distance: 11.55nm; Total motor use to date: 10hrs 25mins which means it is run in, however some more use at high throttle settings might be advisable.]