3rd May: Torqeedo Outboard trouble – a day at anchor! (~4nm) 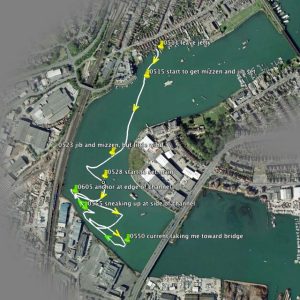 Got up at 0400 to catch the ebbing tide but before leaving jetty at about 0510 I knocked my cup of tea off the jetty into the water. It was an omen! As soon as I increased power on the Torqeedo the revs went up and the watts went down – it was only just about moving Seatern through the water. Having cleared the “Quay 2000” pontoons I restepped the mizzen mast and broke out mizzen and jib, but with hardly any wind these would not take me back up wind and up current. I re-attached the gooseneck track to the mast (removed in preparation for shooting Northam Bridge) and hoisted the main. However tacking across the current I was in increasing danger of being swept into the bridge with masts raised and sails set. I managed to sneak along the edge of the channel out of the main current and dropped anchor over what I hoped was reasonably flat mud. 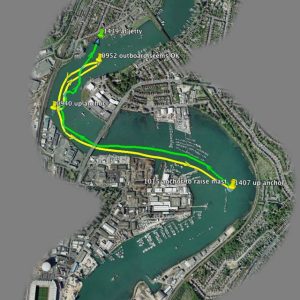 Looking at the outboard I realised I had a spare propeller, shear pin, nut, and washers, but not the size 17 socket spanner to actually take it apart! With the tide out I waded through the thigh-deep mud and walked home to get the spanner. Back on the boat I found that the nut and prop simply turned with the motor shaft but by spinning the motor got the nut off to find the propeller stuck on the shaft. By spinning the motor the other way I managed to tighten the nut to the point that the propeller turned with the motor. Having had breakfast while waiting for the tide, I tentatively headed back up the river until opposite the jetty. Knowing I couldn’t get into the jetty until early afternoon I decided to risk going down to Chessel Bay where I anchored for about 4 hours. With little wind and not totally trusting the outboard I didn’t dare go further but passed the time washing down the decks, reading the Marine Quarterly, and watching boats go by. 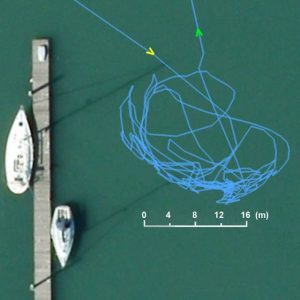