10th June: Beaulieu River and back to Southampton 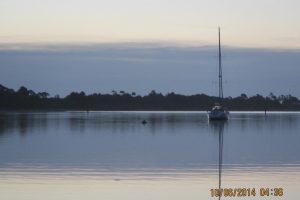 0400 woke after a very poor night, the waves must have been just wrong since I normally have no problems sleeping on Seatern; but a beautiful morning, calm, gulls, oyster catchers, cows lowing in distance. I tightened the shrouds last night but will need to check mast rake sometime. 0708 started to get under way to motor up river, off by 0720. The wind had picked up and even inland it was blowing quite strongly so I went up the river faster than I was planning to make sure I didn’t get blown into any of the moored yachts. 0850 anchored at the head of the river and had cup of tea. Left at 0930 just after high tide; again the need to keep steering way and the fact I was with the current meant I couldn’t go as slowly as I would have liked.

[photos from the trip up the Beaulieu River] 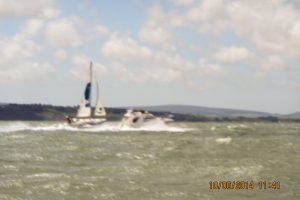 By 1120 I was out of the river and set just jib and mizzen for the run back up the Solent. There was quite a chop (see the blurred photo!) so I headed towards the IoW with the wind on the starboard quarter before qybeing to head for Calshot Spit. Had to give way to a yacht close hauled from starboard which seemed to be heading for me. As he passed my stern the helm took off his hat in a sweep of his arm – it was John Green! Hadn’t recognised his boat bow on. 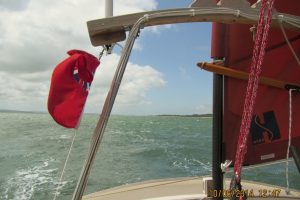 The waves were smaller off Calshot and I rounded up onto a broad port reach to go up Southampton Water against the current. I wondered about sailing further east first but it was a good force 5 if not 6 and I didn’t want to be caught out if it strengthened more. Bore away to cross shipping channel, then a broad reach up the Netley side before getting the sails down at around 1440 off Weston. Again, had it been less windy I’d have headed further up the Test side since I had lots of time before I could get back onto the jetty on the evening tide. 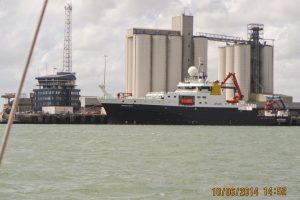 The new RRS Discovery was moored at Dock Head for some reason – she looks too much like the James Cook for my taste, the previous Discovery was a “one off”, particularly after the rebuild when she stopped looking like the Royal Yacht Britannia! I enjoyed going to sea on the research ships; I enjoy sailing Seatern; it’s a different life! Going up the river I realised I’d not really seen it at low tide before – the rusty iron piles near Lauren Marine are usually hidden below the surface! 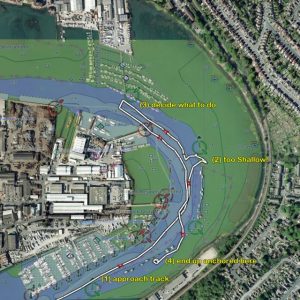 I hoped to sneak in behind the pontoon just south of Chessel Bay but when I tried it it was too shallow. In retrospect I should just have run aground and waited for the tide – which I would probably have done if under sail. However having motored up towards Kemp’s thinking what to do I ended up going in behind the pontoons opposite the start of Shamrock Marina. In the wind I didn’t end up anchored where I planned and ended up close to an empty pontoon. I was worried I’d drift back onto a yacht moored on the next pontoon when I raised the anchor so I used my floating grappling hook for the first time (a “Line-A-Sure”) – I’ve had it a few years! It worked and I got secured to the pontoon allowing me to raise the anchor and motor away safely once the tide was high enough to get in at my jetty.

My “no.1 battery” was looking exhausted so I swapped the battery connections over to use the “No.2” battery. This all worked except I couldn’t get the Echomap working again – I’m not sure why and can’t now reproduce the problem!