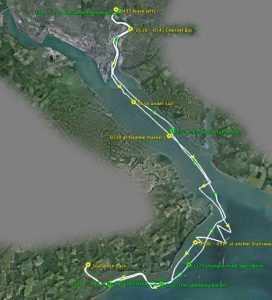 On the previous evening with a forecast of SW winds force 3 to 4 becoming 2 to 4, I decided to try sailing to the Beaulieu River entrance – although wind and tide would be against me in the Solent. Neapish tides so left jetty at 0435 and anchored Chessel Bay 0510 for breakfast. Forecast now S-SW 3 to 4, occasionally 5, veering NW later. 0545 continued down river under motor. An enclosed car carrier “Tiger” was swinging at Dock Head so I motored a little way along Weston Shore before starting to set sail (forgot to shake plaits out of reefing lines so took a bit of time to sort out!).

A broad reach and favourable current gave me around 4kts despite lightish wind. Dodged across shipping channel near Fawley chimney since there was a break in the ferry traffic. In the Solent I was making poor progress tacking against current in the drizzle. With a rain squall approaching at 0900 I anchored in Stanswood Bay, got the sails down and at 0917 continued under motor have made a cup of tea. The weather had cleared by the time I reached the Beaulieu River and I motored a little way up it before returning to Gull Island where I anchored for lunch. The weather forecast for the next day was bad, otherwise I would have gone further up the river and come back to Gull Island to spend the night. Since it would be a run/reach out of the river I tried sailing from the anchor under mizzen and main but found I couldn’t bear away till I broke out the jib – bit embarrassing because there was not much room between the mud banks. 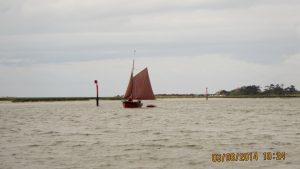 Out of the river and running goose-winged I started to pump out the ballast tanks; however the wind began to increase and knowing I’d be on a close reach up Southampton Water I re-flooded them. I was soon up at around 6 kts at Calshot and, with a favourable current, this continued as I came onto the reach (the speed v distance plot shows when I was sailing in blue). By the time I was off Netley there was a couple of fishing boats plus two of the smaller dredgers ahead, it’s hard to tell which way they are going – they tend to go forwards and backwards without turning! With the wind still strengthening I decided to get the sails off early before I got amongst them and motored the rest of the way home. I anchored in Chessel Bay to get the mast down since there was a reasonable wind and current. Arrived at jetty at 1500 and had all secure by 1554. It seemed like I’d made my first real “passage”! The photo shows a lovely gaff cutter in Beaulieu River entrance.