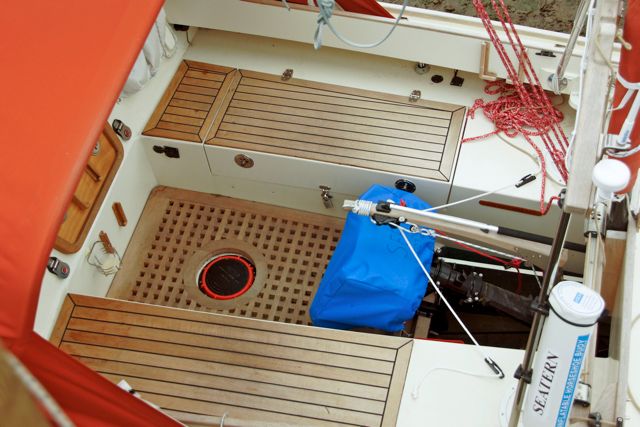 Tiller Tamer: I had rigged up a “knotted rope and shockcord” type of tiller tamer. This worked when I was using the Torqeedo but tended to catch on the Tohatsu outboard when I was raising or lowering it. I gave in and bought a “Tiller Tamer” from Force 4. At £35 this was ridiculously expensive being made by Davis Instruments in the States who make equally expensive weather stations (I know, I’ve got one). It doesn’t even include the cleats for the control ropes – fortunately I had some clamcleats off a dinghy that I could use. 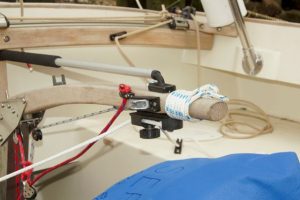 Expensive, BUT IT WORKS! I used it on the trip to Beaulieu on the 9th/10th and it made so much difference to handling the boat. Set with light friction it takes the weight off the tiller; tightened up slightly (you just turn the knob) it holds the tiller roughly in place so going about I can use both hands to tack the jib more quickly. Tightened up completely it locks the tiller in the chosen position. (a similar DIY device is described in Roger Barnes’ Dinghy Cruising Companion – “John Huntingford’s Helm Impeder” – but the Davis version is simpler).

Locker Vents: To try to stop petrol fumes from the remote fuel tank building up I fitted some ventilators to the cockpit hatch lid. I realise petrol fumes are heavier than air but maybe I’ll induce more through flow. These can be seen in the photo above which was taken after the 10th when I’d also fitted a cover for the outboard (to decrease the chance of the mainsheet catching on it) and a stop to raise the tiller handle slightly more above the outboard (visible in the top photo).

Bow Roller: I also swapped the bow roller from the port side (where Swallow Boats had fitted it) to the starboard side. That way it can be used with the anchor in the starboard locker since the jib furling gear is rigged on the port side of the bow. I’m not sure why SB rigged it as they did!