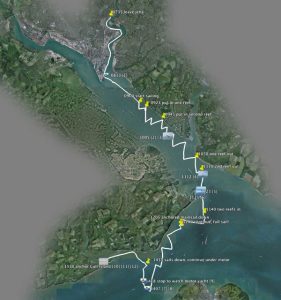 0735: off jetty as soon as tide permitted. Motored down river getting mast and sails back up under way. Hit pile off Weston while I was below – I was sure we were leaving it well to port even when only about 20m from it! Fortunately bow-on and not too fast, else would have had more damage. No idea how it happened. Put sails up with one reef for beat up Southampton Water. Second reef in off Netley Dome – wind then dropped but kept reefs in at first because a shower/Cb to southeast. By 1055 shook one reef out and second out at 1110 when it was clear that shower was not coming towards me. 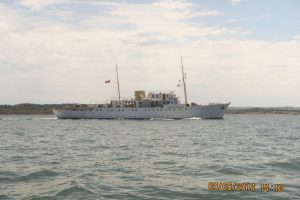 Around midday the wind freshened rapidly and veered SW as I rounded Calshot Spit. Put 2 reefs in but as I tacked out from Stanswood Bay I didn’t like the way the mast was flexing – decided the rigging was not tight enough. I turned back and anchored intending to continue under jib an mizzen only. However having got the main down and made a cup of tea I found the wind had dropped entirely! 1240 got the anchor up and raised full sail since it was a good chance to sort out the reefing lines etc. The wind gradually freshened and it became very pleasant sailing weather. With time to spare I headed over towards the IoW; thought a Hydrographic ship was approaching but it tuned out to be a rather lovely private yacht! 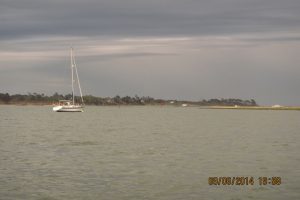 Around 1530, dropped anchor at Gull Island a bit further into the fairway than I’d planned (although between the red piles) in 5.2m water; allowed for 8m max depth at high tide and put out about 20m rope after the 10m chain. Soon after a yacht picked up one of the visitors moorings. Paid Harbour Master £5.50 anchoring fee and was given booklet about the river. He thought there would enough water at Beaulieu until about lunch time. 2050 a fighter came over low and fast, it was nearly high water and depth was 7.2m. Had bad night’s sleep, partly due to gulls but mainly due to the small waves lapping the side of the boat – try and get closer to shore next time! At first didn’t use ear plugs in case anchor alarm went off but ended up with ear plugs and head under cushion – still heard anchor alarm when Seatern drifted to other end of scope with the turn of the tide.
[Duration: 8 hrs; track: 20.6 nm]