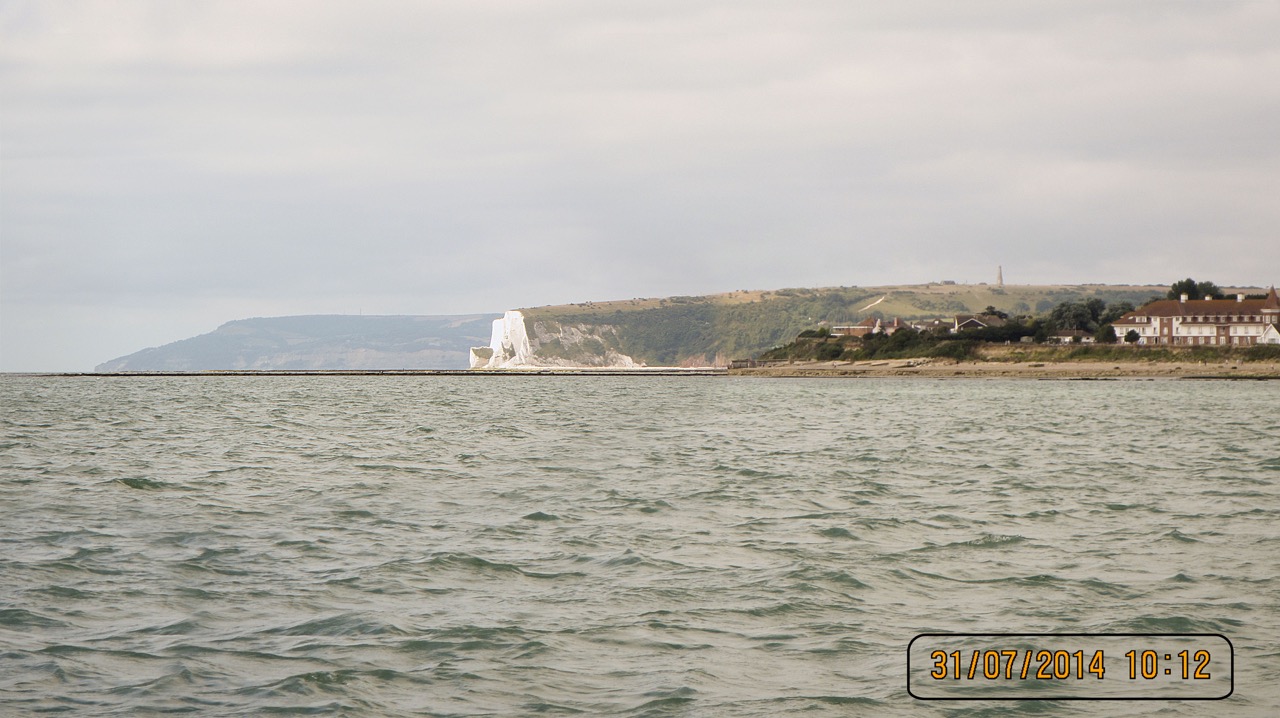 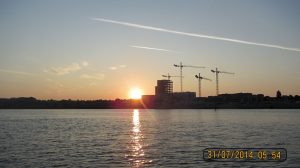 Made early morning decision to go today (Thursday) in case depression forecast for Friday night arrives earlier than expected. Left jetty at 0518 and got Shipping forecast approaching Northam Bridge. Beautiful sunrise as I past the developments on what was the Vosper-Thorneycroft ship yard. 0602: put sails up on Weston Shelf since there was a light W-NW breeze and pumped out ballast tanks since they were only half full. If I stop filling when the aft tank is full, the forward tank is probably only half full so the two then even out; also I find that self bailers tend to leak slightly when exposed to the Itchen mud! 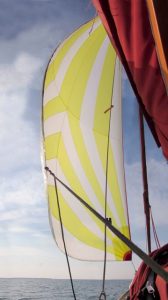 0730: broad reach while having breakfast off Netley shore but the wind dying away; reballasted and prepared to fly the asymmetric, launching port side for the first time. 0755 asymmetric set and huge difference to Seatern’s speed, 6kts despite light wind! However I now realised what I’d been told before – the problem with an asymmetric is that the faster you go the more you have to bear away to keep it flying! 0825: smaller waves starting to break and I’d never got it down in any wind, also getting more and more headed…so I let go of the tack and hauled it in behind the main using the sheet and then the foot to collapse it, then I used a couple of turns of the halyard on the winch drum to control the drop while stuffing the sail down the companionway. It all went very smoothly, I bet it won’t always be like that!

0847: fishing boat near Browndown buoy; lots of fishing floats, possibly because wrecks marked on chart. By 0910 in IoW ferry lanes but none particularly close, last time I was further north where the car ferries pass each other and ended up in a ferry sandwich! 0930: off Seaview; I had to look on map to find where it was! It looks a nice place, worth a visit some time, I don’t think it’s in the Channel Pilot but quite a few yachts moored in there. 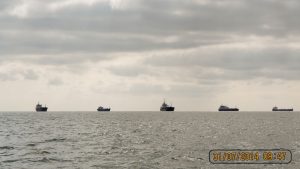 0945: the St Helen’s Road anchorage was now ahead, tankers all looking to be in ballast? – impressive sight! For some reason reminded me to do a radio check with Solent Coastguard – “loud and clear” which might be useful sometime! 1010: approaching, but west of, the Bembridge Ledge east cardinal buoy which I’d chosen as a nominal destination. The wind was freeing up and increasing which I assumed the effect of the IoW topography.

Took photos and then turned back since I was worried I’d have an adverse current for the most of the return, planning if needed to hug the mainland shore. However the wind continued to freshen and by 110, back off Seaview but closer inshore, I put in a reef and checked that the ballast tanks were topped up. Seaview really does look nice and there are trots of empty mooring – rather a lot of them in fact! 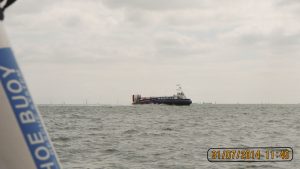 I was keeping pace with a larger cruising boat some distance to leeward of me when at about 1145 while photographing the Hovercraft I got suddenly headed and, soon after sailed into a hole in the wind! Back on course I had lunch (sandwich + bakewell!) before shaking out the reef at around 1230. Of course the wind then started to increase again and also to veer, but expecting to be more sheltered in Soton Water I sailed on, over-canvassed with full sail, which meant I had to sail the boat rather than trusting the Tiller Pilot! The new cleats I’ve fitted for the mainsheet track are a huge improvement; with the car to leeward the helm was much lighter.

Somehow I always imagine having to turn to enter Soton water but its actually more or less a constant bearing from Bembridge to Southampton. Given a SW to W wind I did the whole trip without having to tack (apart from turning around)! At 1430 I hove to off Weston SC to drop the sails and tidy the asymmetric etc. before motoring in. 1550: back at the jetty with a couple of hours spare on the tide.
[42nm in 10hrs31 mins – average speed 4 kt; while sailing 4.5 kt]