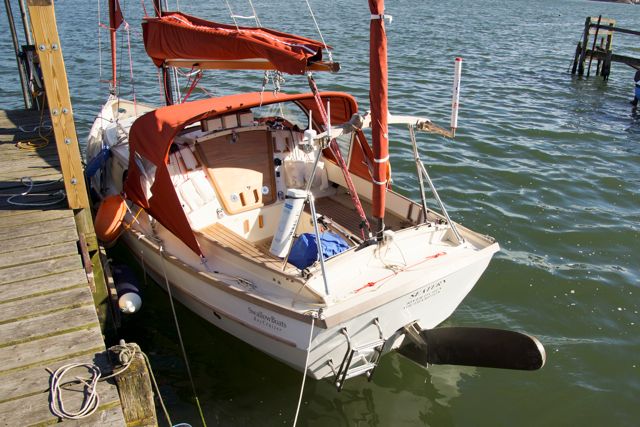 Seatern was built with a boom gallows to aid lowering and raising the mast for going under Northam Bridge. I had suggested to Matt that it should be similar to the one that Julian Swindell has fitted to Daisy Grace. However I suspect the gallows lead a harder life on Seatern, where the mast is raised and lowered twice each time I sail, and it has not proved strong enough. Matt admitted that although he had allowed for the vertical load, he hadn’t considered the horizontal drag of the boom on the gallows as the mast is rotated to or from the vertical.

As supplied by Swallow Boats the Gallows consists of a rather fine curved laminated teak top supported on 1″ stainless steel stanchions which are fixed to reinforced sections of the cockpit “seat backs” just forward of the main sheet track. The bottom sockets were only screwed in place and I replaced these with through bolts soon after getting Seatern. However the screw holes had already been enlarged by movement of the gallows and, as time has passed, it was all feeling more and more rickety. 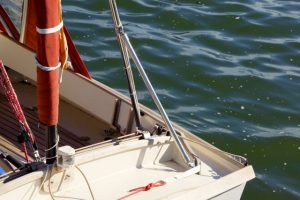 Today I removed the gallows and filled the fixing holes with epoxy. I then refitted the structure with two aft bracing struts using stainless canopy fittings and tube bought from Baseline Marine. The whole structure now feels very solid, more so than ever before. I’ve found the gallows really useful in addition to its role when the mast is lowered. It provides a support when moving around on the aft deck, as well as for the boom, an inflatable horseshoe, the various aerials (radar and AIS transponders and TV!), and for flying my “Red Duster”. How do people manage without one?!