Sailing almost entirely single-handed, the idea of falling over-board and watching Seatern sail away with the tiller pilot in command is not inviting! My original idea for jackstays is shown in blue in the diagram. I fastened webbing jackstays to the sampson post and took them to the stern inside the toe-rail but outside the shrouds. The idea would be to be able to get to the stern ladder (dark blue) and get back on board. Because the safety line clip would almost certainly catch on something before reaching the stern I thought about using a safety line extension in a small throw bag at my waist so that enough line would pay out to ensure I could get to the ladder. I even wrote to Practical Boat Owner asking for comments on this idea (PBO 574 June 2014, p.14). 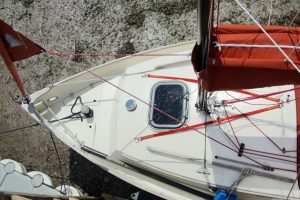 By the time the letter was published I had started to sail Seatern and realised that my planned jackstay arrangement was impracticable. It would be too easy to fall in through tripping over the safety line itself – so in general I didn’t clip on meaning that the jackstays were useless! However the PBO letter did prove useful; I was referred to experiments showing how hard it would be to haul oneself back to the boat (PBO 512 August 2009, 96-98), and a reply extolled the virtues of not being able to fall overboard in the first place (PBO 575 July 2014, p.15). Following the advice of Michael Collis’s letter, and thinking back to my caving days I decided to rig short, taught jackstays on the cabin top (shown in the photo, and in red on the top diagram). The anchor points are bolted through the (foam sandwich) cabin roof which I have reinforced on the inside with marine ply.

Having decided to protect myself on Seatern in a similar way to what I used to do in caves, I went to the Cotswold Outdoor Store with the idea of buying some slings (webbing loops) and new karabiners. They asked what I wanted them for, and when I told them it was for a boat they refused to sell them to me. Apparently there is some new European legislation covering safety equipment used for mountaineering and outdoor activities, and the climbing stuff is not certified for marine use! Having been shown the type of karabiners climbers use nowadays I must admit I can see why – they are very light weight and would probably not stand up to salt water corrosion. However the slings are the same material we use for safety lines and would have a much harder life down a cave than on the ocean!

In the end I adapted the marine safety lines I already had, using karabiners from Baseline Marine. I had the jackstays made to measure by Jimmy Green who were doing a special price during June! I think you can still buy the old type of heavy steel karabiners from caving shops – unlike climbers, cavers don’t walk around with hundreds of them attached to their harness! I recommend “Caving Supplies” of Buxton who will sell you the sort of additional D-ring which I use. 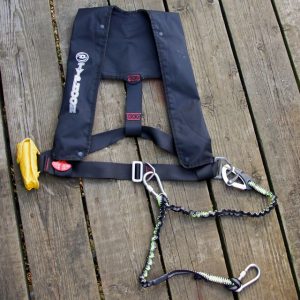 I also converted the standard 2m safety line into two shorter “cow’s tails” adding two stainless steel screw-gate karabiners bought from Baseline Marine (a climbing shop having refused to serve me!). I think these are much safer than the traditional asymmetric clip and less awkward than the standard marine safety clip. I was surprised to find the latter were impossible to attach quickly to the cockpit safety eyes sold specifically for that purpose! The photo shows my “day-to-day” lifejacket (for really bad weather I have an automatic “Spinlock Deckvest” which has thigh straps and a spray hood!).

The safety line is normally attached to the lifejacket “D-ring” but I have also fitted an old caving D ring as an alternative anchor point and to hold the cows tails when not in use. This really does make all the difference to wearing the safety line, I definitely recommend fitting one (Caving Supplies in Buxton sell them for about £3) – it lets you push the stored safety line out of the way, and also for you to be anchored at your back if that’s better. 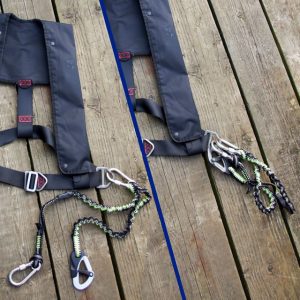 I tried out the new jackstays on 8th July while sailing to the Needles and back. They worked really well. I can clip on while in the cockpit and then move forward. They provide support while working at the mast and a tether when on the foredeck (e.g. to raise anchor). Because they are an aid rather than a hindrance I will now actually use them. Working on the aft deck (e.g. lowering the mizzen mast) I can clip onto the boom gallows so the lack of jackstays there is no problem.