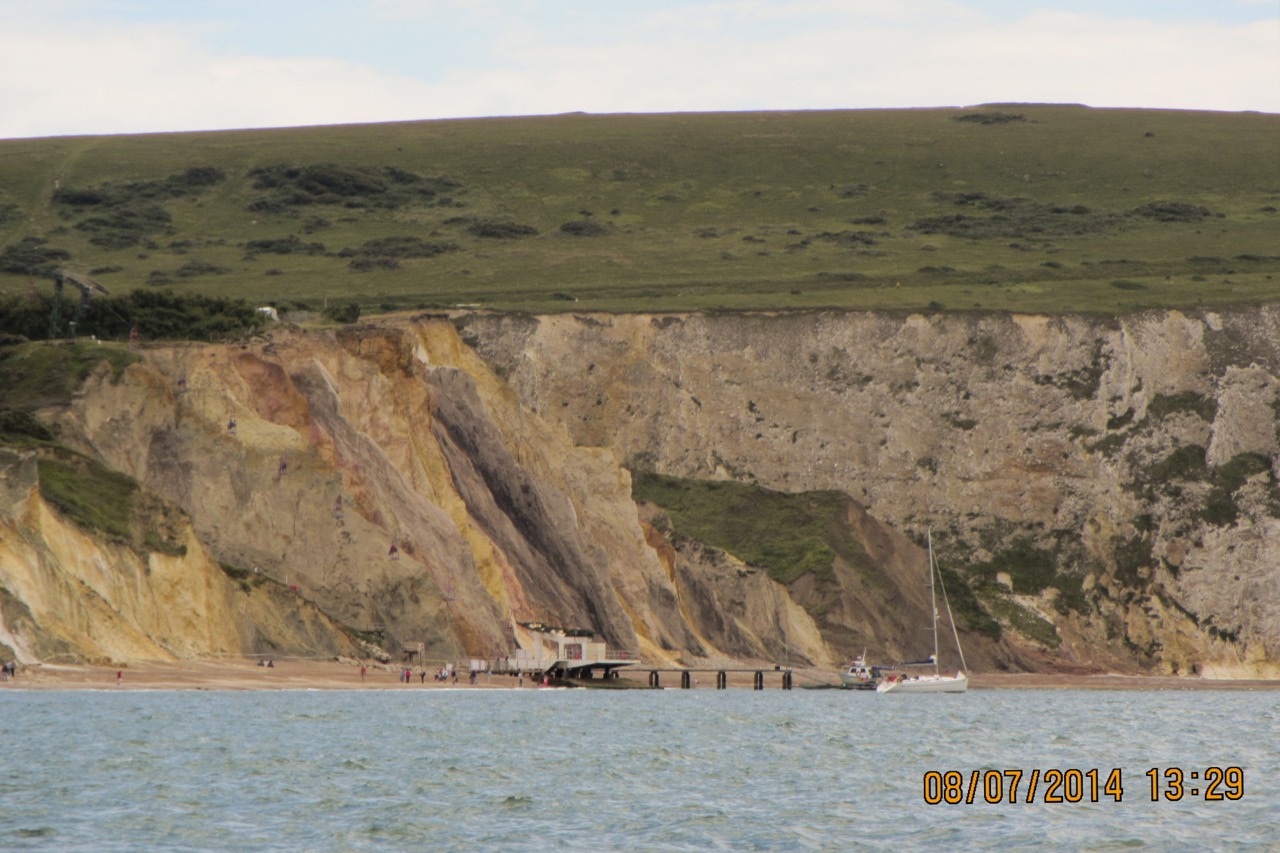 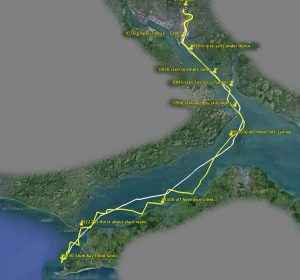 I originally decided to do a day’s sail on the Wednesday since heavy showers were likely on the Tuesday; however the 0520 shipping forecast suggested the possibility of having too much wind on Wednesday if a front progressed from the east (it didn’t!), so I made a quick decision to go on Tuesday regardless. After hurried preparations left jetty at 0712, about 30 minutes after it would have been possible. The aim was to have a first look at Newtown Creek.

With no wind I motored down the river raising the mast on route and, once past Woolston pier, raised the sails while the motor kept the apparent wind dead on the bow! Motored down Southampton Water – the main sail was adding nothing – and while pumping out the ballast, took an opportunity to cross the shipping channel at Calshot chimney. The Rule 20R bilge pump took 30 minutes to empty the tank including two pauses to allow water to flow from the bow tank. There were already showers over the Isle of Wight and to the east as I reached Calshot. 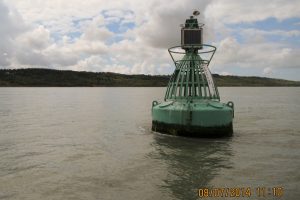 Soon after cutting across Calshot Spit the wind started to come up from the west so at 0930 I stopped motoring and beat across the Solent. By 1100 I was off Newtown Creek with the leading marks in view. However I’d got there quicker than I’d expected and, with the current still ebbing westwards I decided to sail on. Unballasted, Seatern was out pacing a couple of nearby cruising yachts – admittedly, I was actively helming her because I was wary of gusts from the nearby showers, and also because I wanted to get as far as I could before the tide turned. 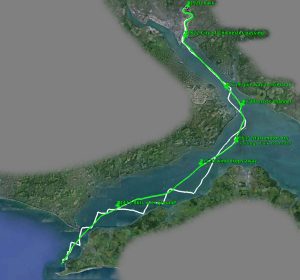 Went past Hurst at about 1230 with little current evident (although waves were breaking over the Shingles). Having reached Alum Bay at 1330 it was clear the current was now against me and I was thinking of turning back and having some lunch once off the wind. Unfortunately a very large shower was approaching from the west and the wind was increasing. Having had empty tanks for the beat I now decided to fill them for the run! I didn’t want to be in what looked like a good rain squall with empty tanks. This proved a wise decision! 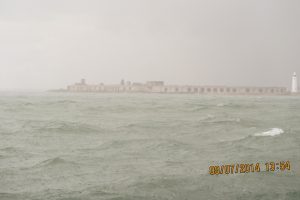 Passed Hurst Castle at about 1355 in rain and wind. More or less running, by 1410 I was doing nearly 8 kts over the ground! The rain continued but the wind dropped away and I finally had a chance to have lunch.

I emptied the tanks again but there was practically no wind, a nearby yacht had it’s spinnaker drooping in the rain so I didn’t bother to get the asymmetric out. From the Beaulieu Spit to near Calshot I was doing a bit over 2 kts most of which was drifting on the tide. Started the motor and the wind picked up, but died again when I started to sail. I was now in the shipping channel so I gave up and used the motor to cross to the east side and packed away the sails. The rain stopped while I was motoring up Southampton Water and some wind appeared but nothing to speak of. There seemed to be a continual procession of enclosed car carriers leaving Southampton. 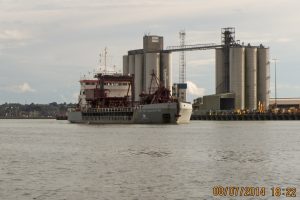 City of Chichester passed my as I entered the Itchen and I hung back in case she was going to swing before berthing but she went straight in. Motoring up the river getting the mast down and up should have been easy but the rowing clubs were out and I kept on having to take over from the Tiller Pilot. One coxed rowing four went past very close and then stopped dead ahead of me – I had to scrabble back off the foredeck to slow the motor. Once under the bridge I had to motor up towards the railway bridge while I sorted things out away from the rowers – then a host of canoes came down from Woodmill as I was wanting to turn! Got back in at 1920 with the boom still not properly fixed to the mast. Checked the batteries which were showing 80% (no.1) and 85% (no.2). Track: 49.3 nm.