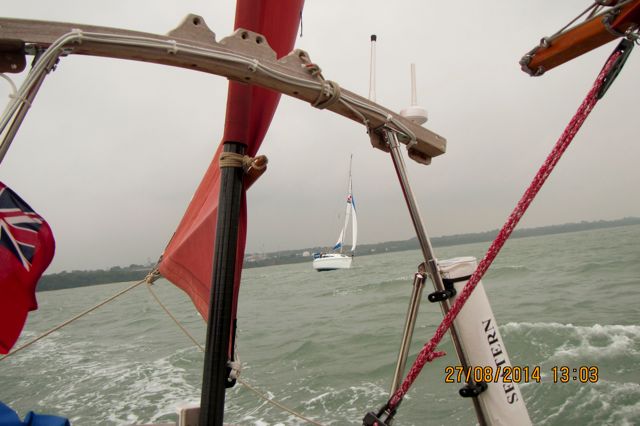 A “single tide” sail with Nigel James from the Solent RC Model Boat Club. The first time I’ve been out with someone who knows how to sail and, indeed, has significantly more yacht sailing experience than me. We left the jetty at about 1115. 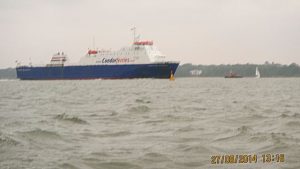 Given the strongish SE wind, having motored down the river I would have got the sails up after the Itchen Bridge. However there were a lot of boats out from the Water Sports Centre so we carried on around Woolston Jetty and hoisted sail beyond the moorings putting in a single reef. With the SE fetch it was quite lumpy and it didn’t help that the main halyard was caught behind the spinnaker halyard block shackle (need to replace it with a allen-key version).

With Nigel helming we tacked down Southampton Water, some of the squalls were quite strong so after a couple of tacks we put in a second reef. Crossing the shipping channel, we were being followed by a cruising boat but we generally pointed higher and eventually left it quite far down wind of us. We had to stay on the west side until a Condor Ferries ship (from the Military Port?) had passed. 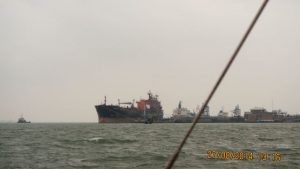 By then the weather was closing in with hints of drizzle and having crossed to the east side we went about near the Hamble Oil terminal and ran bank towards Woolston having lunch on the way. Having dropped the main off Weston Shelf, with time to spare, we went up the river under jib and mizzen. 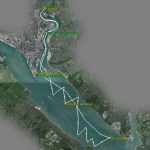 The wind dropped away in the river and near Ocean Quay, with rowers and sailing school dinghies closing in we started the motor and got the mast down at Chessel Bay. Arrived back at the jetty at around 1512 by which time there were starting to be periods of light rain. Didn’t take many photos but did get some video sequences for later use.