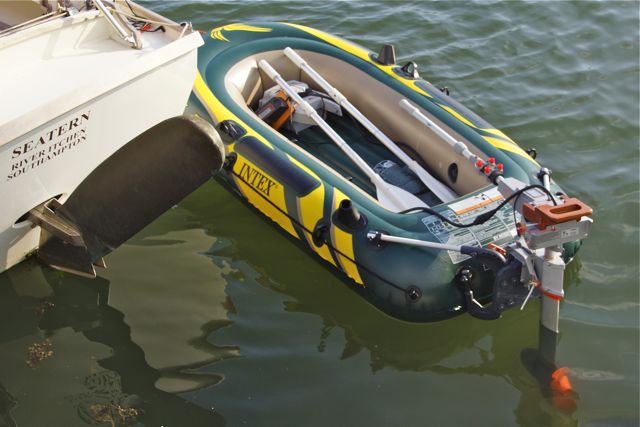 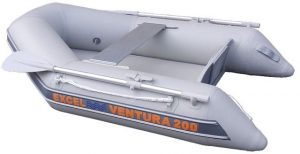 In preparation for Seatern’s arrival I bought an Excel SL200 inflatable dinghy (right) to act as a tender. The SL200 is relatively expensive (over £400) but I chose it because it had the lightest weight specification (14 kg) and the high pressure floor was said to help it track well. Soon after I was pleased to see the Excel SL230 (slightly larger version) given the “best on test” award in an inflatable boat comparison by Practical Boat Owner. I tested the SL200 on the river and it performed well, although it was difficult to row without hitting ones knees, probably the larger version would be better. On the other hand the SL200 held the possibility of fitting in the cockpit locker on Seatern. 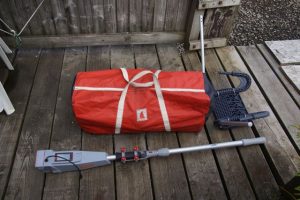 Now I am sailing Seatern I’ve actually been storing the SL200 in the forepeak. I haven’t used it so in some respects it’s a needless weight. Mine is actually heavier than advertised ( hull in bag = 17.3 kg; oars pump and seat = 4.4 kg; total = 21.7 kg) and I feel it will be a struggle to move it to the cockpit and inflate/deflate it. There is also the problem that, since I am not (as originally planned) using the Torqeedo to power Seatern, if I want an outboard for the SL200 I must add a further 13.4 kg, so 35.1 kg in total (half a person).

To have a dinghy but without the weight penalty, I decided to try an Intex Seahawk 2 (see above, left). These are cheap (£50 – £60) and can be fitted with an outboard bracket (£23). They are also light (boat = 6 kg; outboard mount = 1.9 kg). That means that the boat with pumps (12V plus foot-pump), oars from the SL200 (the Intex oars are poor), and Torqeedo totals 23.9 kg – only 2 kg more than the SL200 without a motor. The Seahawk is also much more compact when deflated (photos right). In the photo of the two packed bags I’ve tried to correct the perspective to compare the size of the rolled up dinghies. 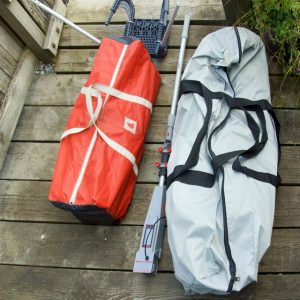 Comparison of Excel and Seahawk bags

I tried the Seahawk on the river. Sitting in it feels a bit like being in one of those dinghies that ditched airmen use – or so I imagine! However it is reasonably stable and OK to row using the Excel oars (I didn’t even try with the supplied plastic ones). The Torqeedo with battery attached tipped the Seahawk up onto its stern. However with battery stored forward and using a tiller extension it worked fine on low power. Higher power tended to bend the stern tubes downwards although this could be counteracted by pressing down on the tiller extension. Having no centre-board the Seahawk steers like a shopping trolley and might be difficult in a strong wind. However for occasional short journeys (like laying a kedge anchor) it should be adequate – provided you don’t puncture it with the anchor! Obviously the material is a lot thinner than the SL200, but for very occasional use I would think it’s OK. 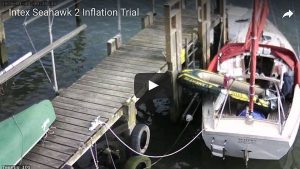 I’ve made a video (10mins) showing my trial inflation on Seatern. The movie was created after the event using footage from one off the security cameras on the jetty. I didn’t deflate it on the boat since I wanted to let it dry, however I think it will be possible to repack it OK.