4th Sept: The other side of the Needles 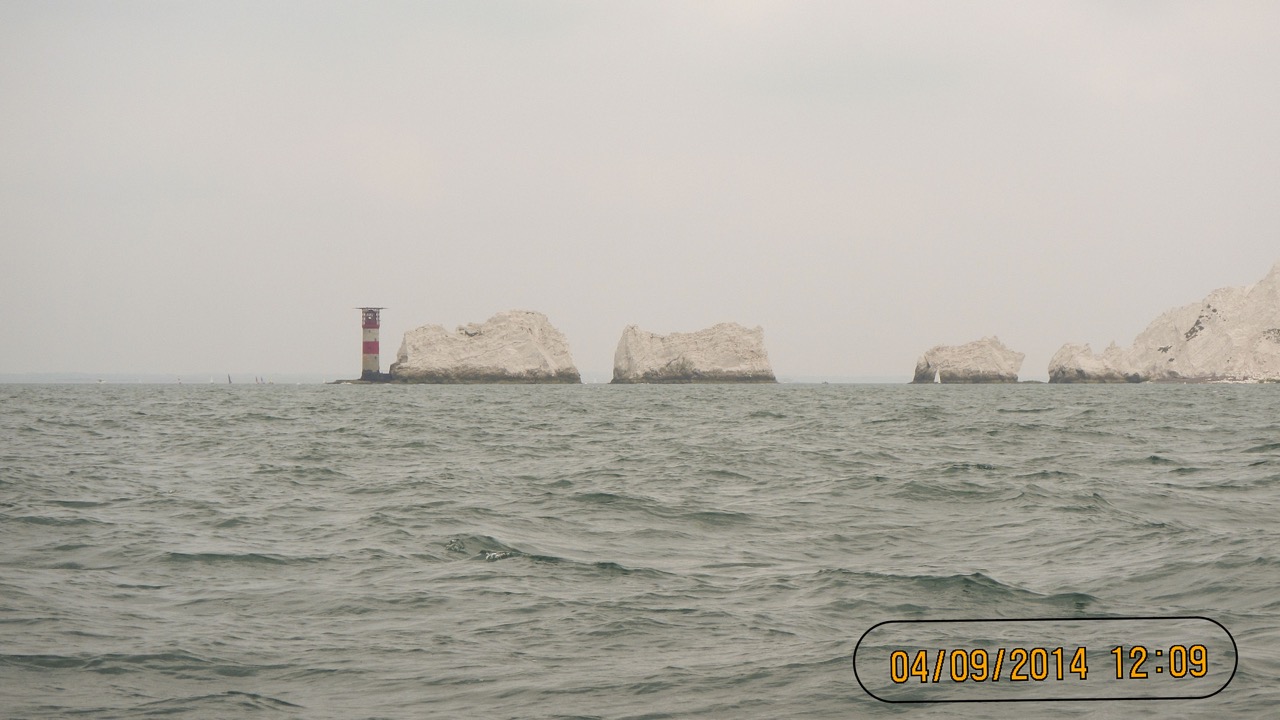 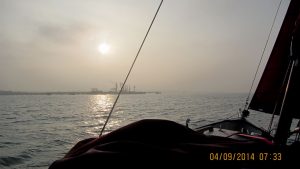 Left at 0530, just starting to get light. 0630: Sails up off Weston but little wind so had breakfast while emptying tanks. 0720: off Netley Dome, wind increasing and veering from NE to E so didn’t hoist asymmetric. By 0824: at NE Gurnard with refilled tanks, wondering about asymmetric. 0910: wind seems to have settled in strength so flying asymmetric. Hoist was spoilt by letting the lazy sheet go under the boat – must shorten it in future! Not a problem since didn’t need to gybe straight away. 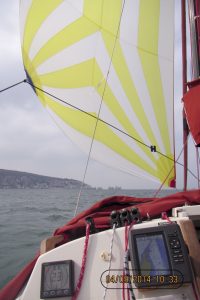 Managed to fly the asymmetric through Hurst Narrows and sometimes ran goose-winged… it’s easier to gybe the asymmetric and then the main rather than both together. Dropped the asymmetric down off Alum Bay since the wind was increasing. Would have been a perfect drop if I had not had a tangle in the tack line! Still it came down well: depowered by letting the sheet out a bit and controlled the tack line with a turn around the winch and by wearing sailing gloves. Worked along the foot from clew to tack, then controlled the drop, again with a couple of turns of the halyard around the winch drum – what would I do without it? 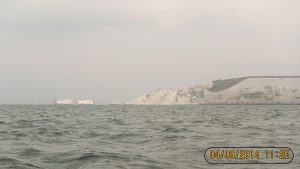 It was gusty around the Needles and the seas were noticeably rougher out in the “Channel”. By 1120 I turned back since I had decided to go through Hurst Narrows under motor and not too long after slack water – I didn’t fancy tacking through there with wind against tide! Not trusting the motor I got the sails down and tidied the asymmetric stuff some way before the Needles while I had plenty of sea room. In fact the motor started first time – not using the choke seems to be the key – and I unfurled the jib again until it was time to round up in the Needles Channel. Had lunch during this period and discovered the stove had run out. The Trangia bottle with spare bio-ethanol proved good for refuelling on a moving boat without spilling, although it would be better if larger. 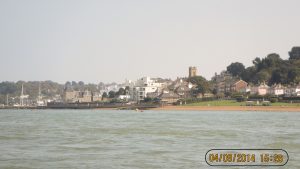 Once through Hurst at 1320 I hoisted sail and beat towards Lymington. With the current behind me, the next tack should have taken me towards Newtown River and I thought about looking inside. However, as I approached it the wind kept backing, allowing me to make good progress along the coast. With the wind decreasing at 1436 I started emptying the ballast tanks and they remained empty for the rest of the trip. On a whim I checked the “AIS from the Isle of Wight” web site and saw Seatern on it! I’d switched the transponder to “transmit” because of the poor visibility this morning – nice to know it works. It even showed how fast I was going and how large (or small) Seatern is. I got to Gurnard Ledges before putting in a couple of tacks and decided to continue far enough East to cross the Bramble Bank and end up on the east side of Southampton Water. That meant I got the closest to Cowes I’ve been so far!

I was starting to sort out the asymmetric for the reach home when, near the Bramble Met station, the wind dropped entirely. With a ferry passing surprising close by given I was over Bramble Bank, I started the motor and got the sails down. During the motor home I saw the QM2 leaving port. Arrived back at 1834 [54.4 nm].