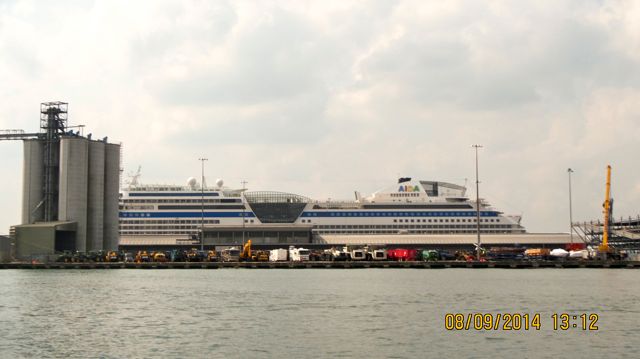 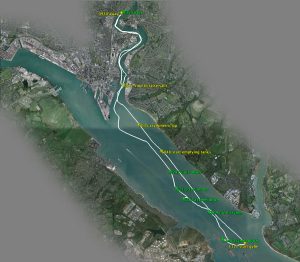 I  was meant to be taking one of the Model Boat Club members out for a sail but he got stuck in a traffic jam so I ended up alone. Left jetty at 0930 and motored to the Itchen Bridge where I decided to try raising the sails there. It’s fairly cramped though so I’ll probably stick to Weston Shelf in future. Once in Southampton Water I got the asymmetric flying straight away (I’d rigged it for a starboard deployment before leaving). With the wind light I also pumped out the ballast tanks. 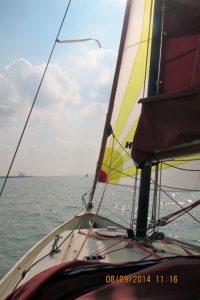 The wind increased a little approaching the Hamble and, with the tanks empty, I was holding the main and spinnaker sheets in either hand and letting the Tiller Pilot steer. The main was easy to depower since when let out it was back-winded by the asymmetric. Approaching Hamble Spit I bore away to gybe and got it wrong wrapping the asymmetric round the forestay. It appeared that the lazy sheet was also wrongly led but when I “corrected” it it was wrong so had to put it back! By this time I was in the shipping channel and getting near the Esso Oil Terminal. Fortunately there were no ships approaching except a Car Carrier which was at Dock Head according to the VHF. I started flooding the tanks as a safety measure and then dropped the asymmetric.

Having lost ground to leeward and with a strong ebb now flowing I beat across out of the shipping channel before hoisting the asymmetric again; however I couldn’t point high enough to stay out of the channel. The wind was now quite fickle and it was clear I wouldn’t get back in time if I continued to sail so I started the motor and got down the sails while motoring back. All day there seemed to be a lot of wakes from ferries and motor boats, and at dockhead three motor boats were charging around flying french flags and having their photos taken – it’s nearly Boat Show time! One of the more ugly cruise ships was at the QE2 terminal. At the Itchen Bridge I saw Mike and Hilary’s yacht moored on the east pontoon so I went over and hailed them but no reply. Got back to the jetty just before 1400. [14.4 nm]

Here is a video taken during the period that things were going well!….