18th Sept: Waverley and the Needles 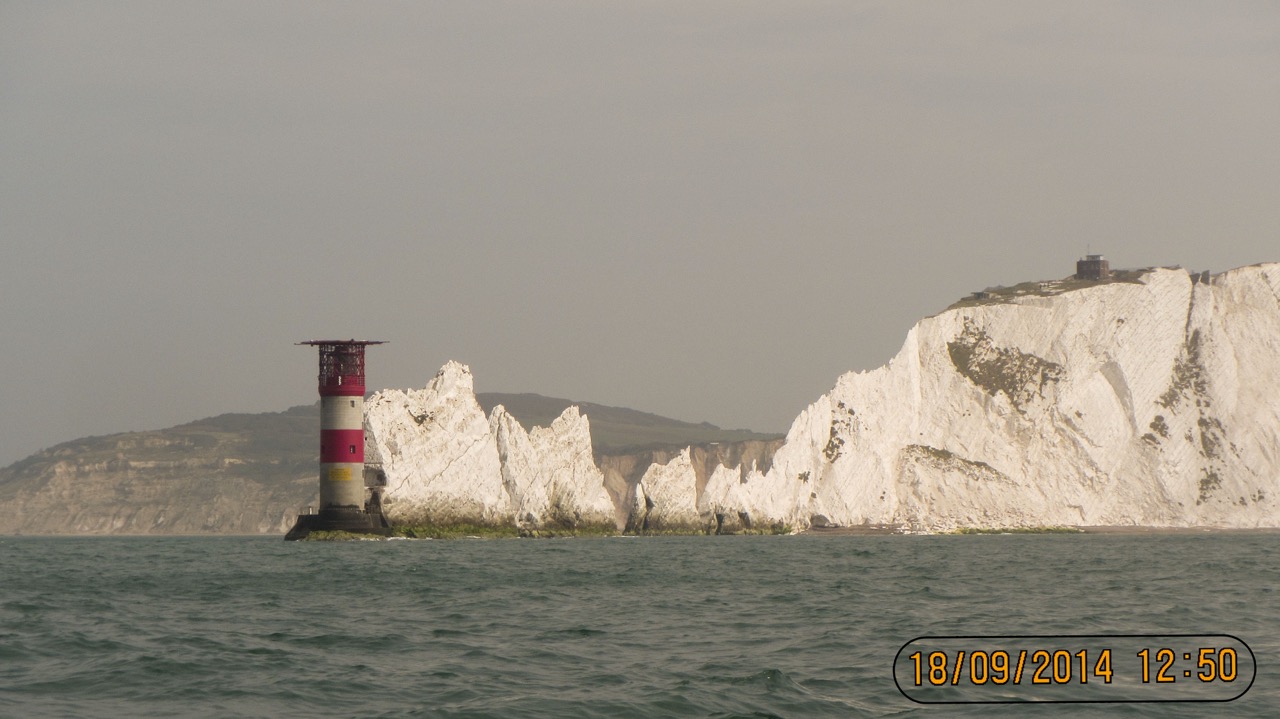 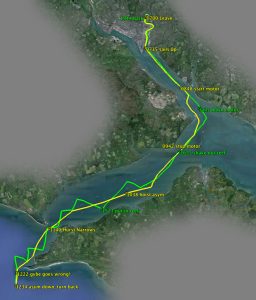 With suitable tides and a stable weather situation I’d arranged with Jon Tipple to go sailing with the aim of visiting the western Solent and seeing the Needles. Left jetty at 0700 with the ballast tank empty. 0750 off Weston Shelf – sails hoisted with light but strengthening wind. 0845 approaching Hamble Spit and the wind has faded away; it’s quite misty and there are sign off deep convection. I decide to motor to get into the Solent and pick up the westwards ebb current. 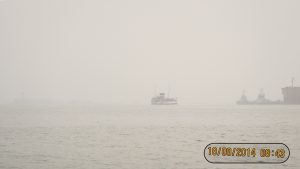 We heard on the VHF that the Waverley paddle steamer was leaving Southampton and she passed us at the Fawley oil terminal on her way to Portsmouth. Since an inbound clear channel container vessel had just passed and I could see the inbound Red Jet on the AIS I decided to motor directly across the shipping channel at the power station chimney. However when part way across the outbound Red Jet emerged from the mist. In theory I should have given way to her but I was close to the channel edge and there seemed little point in turning to starboard when she would have to go past my stern anyway, so I carried on. The Red Jet continued towards us at speed before veering off to go round my stern by some distance – I think he was making a point! 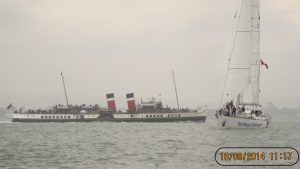 With the wind still very light we continued to motor across Stanswood Bay and I got the asymmetric ready and filled the ballast tanks. At 0940 off Stansore Point the wind suddenly picked up and we stopped the motor and unfurled the jib. With the amount of deep convection I was wary to hoist the asymmetric and soon it started raining, the wind picked up, and there was thunder and lightning. We raised the spray hood and had the door curtain in place.

Fortunately we were on the edge of the storm and by 1038 the wind had gone down, the rain stopped and the sun was out. We set the asymmetric. Keeping the wind fine on the starboard quarter we were pointed towards Lymington but the current was taking us towards Hurst. We heard the throb of the Waverley’s paddles as she charged up behind us and went in towards Yarmouth. Later she passed us in Hurst Narrows and headed off through the North Channel. 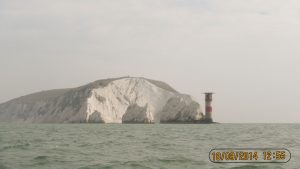 Soon after Yarmouth we were accompanied by a schooner (about 40 foot?). It was presumably because she was being used for sail training that we out paced here quite easily. After Hurst we were running by the lee with asymmetric goose-winged. Seatern had one or two rolling periods but each time came back on an even keel with no drama. We gybed off Alum Bay and quickly over hauled a small SunSail yacht which desperately need the genoa goose-winging. This brought us much closer to the Needles than I’d been before but playing at being a human spinnaker pole, I didn’t get a photo! The sea was remarkably calm around the Needles to Bridge area (and over the Shingles) so we hardened up soon after the Needles. That meant gybing the asymmetric and it got in a horrible twist so we got it down before turning back towards Hurst. First time I’ve totally messed up a gybe with it – I’m sure it won’t be the last! 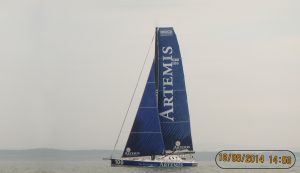 Hurst Narrows was actually so flat that, with the wind light, we had lunch while approaching and going through! Tacking back was aided by the strengthening flood. The wind started to pick up and a bit before Newtown I was thinking of reefing. I wanted to let an oncoming yacht under spinnaker get clear so waited but at 1520 we were hit by a gust. Seatern heeled over and I pushed the tiller away from me since I didn’t have hold of the extension. Seatern dutifully luffed up and we put in the reef before continuing. The Artemis racing yacht passed us – she wasn’t going that much quicker but she was out-pointing us hugely! The wind died away again and at 1655 off Stansore Point we shook the reef out. 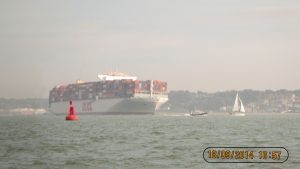 As we approached Calshot the large container ship OOCL Singapore was turning into Thorn Channel visibly heeling as she did so. Southampton Patrol keeping tabs on a yacht at the time. I decided to cross the channel as soon as possible at Calshot Spit buoy, bearing away slightly to speed up. A large car-carrier was outbound and Southampton Patrol came and looked at Seatern, but we were practically out of the channel by then. The wind was dropping off and I decided to motor back up Southampton Water, finally getting back to the jetty at 1934. [53.2 nm]