The weather is making me realise how spoilt we were during the summer. Now almost every day mentions force 7 in the forecast and I’ve been stuck ashore! However today I used a respite in the strong winds to do some of the tests I should have done on the 28th September. I moved the Seafly round to the pontoon and tethered it to the end of the jetty via the electronic balance which has recovered from getting wet on the 13th October! It is remarkably difficult to get the boat pulling in a balanced manner while tethered (and while trying to read the balance and note down the readings). It is also an artificial situation in which the induced flow past the hull tends to entrain spirals of air towards the propeller – I did not take readings when such were present. It was after some trial and error that I got some reasonably reproducible values which are plotted in the graph. 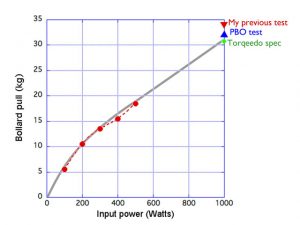 The grey line shows my interpretation of the results. Initially the bollard pull increases rapidly with power but from about 200W upwards there is a roughly linear increase up to the maximum pull of a bit over 30kg (corresponding to the Torqeedo specification, the PBO test [Practical Boat Owner, no. 579, 47-51, October 2014] and my previous estimate. 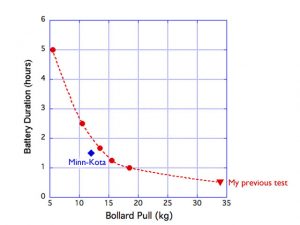 To compare these results to my Minn-Kota Rip-Tide 40 outboard the graph (left) shows duration against Bollard Pull. I estimated a maximum of 12 kg for the Minn-Kota at full power which the makers say gives 1.5 hours duration from a 100Ah 12V battery. The Torqeedo achieves that value at around 250W which would give it a range of 2 hours. In fact that is about the power setting I would tend to use for the Torqeedo since higher values limit the duration too much. Thus at first sight there is not that much difference between the two outboards. However some comments are necessary:

My general conclusion is that for my purposes (powering Seatern in coastal waters) electric outboards do not have the necessary power/duration characteristics. For use on inland waters I think these tests show that the more powerful trolling motors which are now available should be considered as an alternative to the Torqeedo, especially as more 12V Lithium-ion type batteries are becoming available.