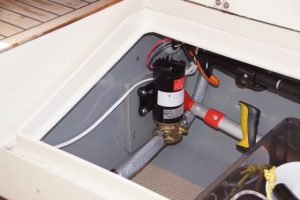 Sailing down Southampton Water I had the first actual use of the new Ballast pump (see September 22nd entry. As expected, a great success. No fiddling about with a bilge pump through the hatch to empty and no wet arm and sleeve to close the self bailer after filling. However, I did have to think twice about which way to flick the cockpit switch – must label it! 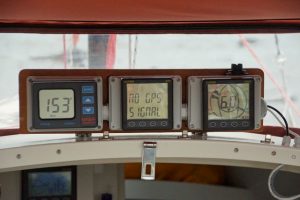 I also used the NASA close-haul repeater which has replaced the NASA log readout in the hatch top mounted displays (right hand readout in photo). I’ll have to get used to not glancing at it on a broad reach and deciding the wind has freed off! However trying to pass the Hamble Oil Terminal close hauled without having to tack it proved very useful. I realise in retrospect that I had automatically switched to using it rather than the windward of the two wind repeaters. The winds around there are very much effected by the oil tankers berthed at the Esso oil terminal on the western side of the channel. I had to work the shifts to clear the Hamble side jetty while avoiding being over powered by the gusts.

I’ve gone through most of my life sailing racing dinghies with bits of wool tied to the shrouds and a mast top burgee telling me the wind. So I’ve been surprised how useful I find the electronic wind readouts on Seatern. Looking at the mast top or the luff of the jib is more difficult when not sitting out, and the ribbons on the shrouds seem to align more fore and aft compared to the wind. Possibly I’ve fixed them too low compared to the centre of the sails. 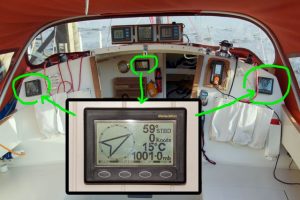 My initial instrument fit was a NASA Clipper wind repeater on each side of the cockpit each using the NMEA output from the NASA MeteoMan wind sensor at the mast top. While sailing, the Meteoman in the cabin provides a clock display for keeping an eye on the state of the tide. This set up works well single handed, however a crew tends to block my view of the windward wind repeater! Not a serious problem but, since removing the log readout left an empty space, installing a close haul repeater seemed a good option.

If starting again, one standard wind readout, central on the hatch top, would probably be adequate. However I like my present set up, and I had the excuse to install my stereo loudspeaker enclosures inside the cabin “to hide the backs of the NASA wind readouts!

[Note added August 2017: The ballast pump has been a success but I never did get used to the Close-Haul repeater and another Swallow yacht owner now has it! With only two hatch-top readouts, the mast can be properly lowered onto the boom gallows. Despite the comment in the paragraph above, I think wind readouts at each side of the cockpit are very useful]