25th Oct: To Hamble Spit and back 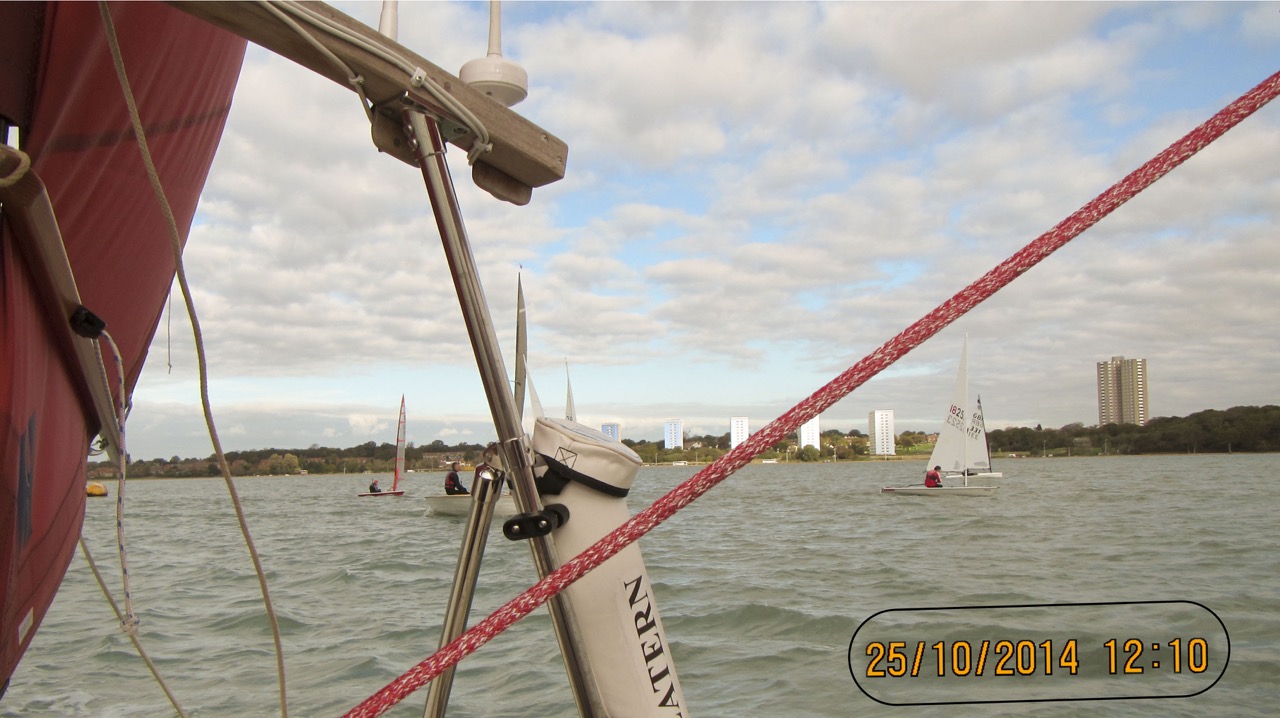 At last a day with a reasonable forecast. Left jetty 1100 and motored to Weston Shelf. Quite a lot of boats moving on the river so had to slow up now and again while sorting out the mast etc. However got mizzen set at about ocean village. Got sails up off Southampton Sailing Club (Woolston) where they were preparing to race. Pumped out ballast tanks (with new pump) while on close reach towards Hamble. Got caught up in a sailing race off Weston SC and probably got in the way of an “RSsomething” with asymmetric set which came at me from starboard while I had boats to port. Didn’t realise they had gybed! 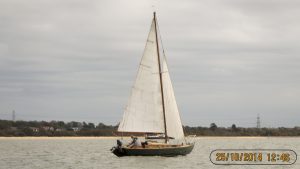 Approaching Hamble Spit the wind appeared to have veered so Seatern was on a very broad reach. However that area is down wind of the oil tankers at the Esso jetty on the other side of Southampton Water, so wind fluctuations are frequent. With the ballast tanks empty I was rapidly over-hauling a small yacht with classic lines (photo). Fearing I was going to have to beat back against wind and tide I decided to turn at the Hamble Spit cardinal mark or at 1300 which ever was sooner. With a beat against strengthening wind in prospect (and also wanting to have some lunch) I used the new pump to refill the ballast tanks. 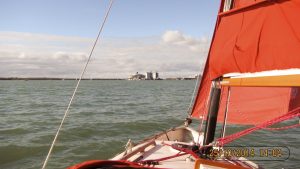 In the event, 1300 and the Cardinal Mark coincided and I tacked away from the over taken classic yacht (feeling a bit of a brash newcomer!). I had to actively sail Seatern, using the gusts to pinch upwind, in order to clear Hamble Oil jetty without tacking. I then let the Tiller Pilot take over while I ate a sandwich but didn’t dare to go below to brew up since the gusts were increasing. Finding I was having to backwind the main a good proportion of the time I put in a reef off the General Electric Aviation Hamble site. Seatern was much happier with the reef and I carried on to Weston shore before getting the sails down because there were lots of boats ahead including one or more dinghy races. Didn’t realise it was so busy on a Saturday! 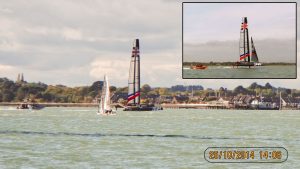 BAR AC45 – the inset is a publicity photo.

Just before I dropped the sails I saw Ben Ainslie’s AC45 off Hythe rise up on her foils – an impressive sight. They called VTS to say that they were at Weston Shelf and “would be in Empress Dock in 3 or 4 minutes” implying an average speed of around 15 kts. VTS replied informing them that the speed limit was 6 knots!

Having got the sails down and tidied up, I made a anticipated cup of tea before motoring back up the river and arriving at the jetty at 1530 [15.6nm – the longest distance on one tide for Seatern so far].