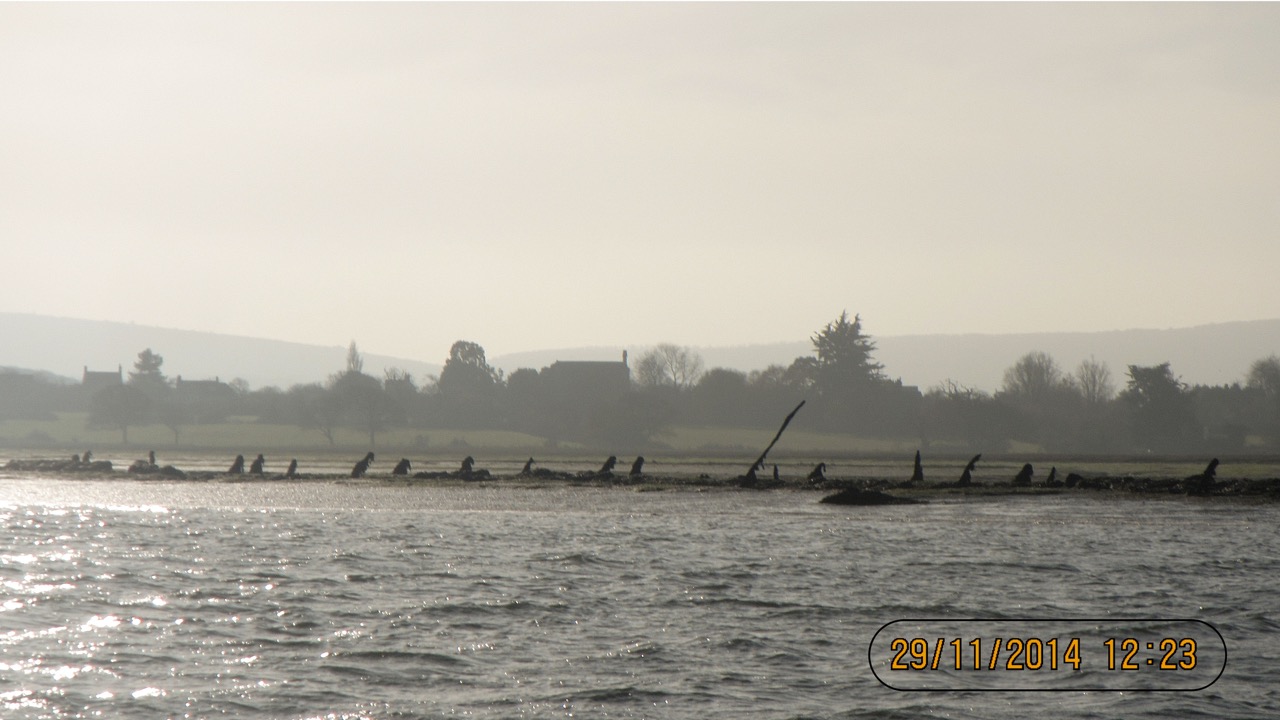 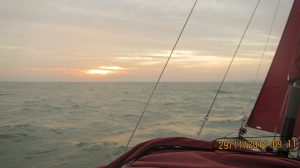 At last a day when it was neither blowing too hard or drizzling too heavy! Motored down the river in dark, and again managed to miss the unlit red pile near “Oil Spill Response”! Even though I know it’s there, I never see it until I’ve gone past. In Southampton Water the SE wind was already picking up and producing waves. Since it implied having to tack I continued motoring in order to have breakfast and fill the ballast tanks which had been empty over night.

Preparing to raise the sails I noticed the main halyard had gone the wrong side of the boom when I raised the mast – I mustn’t have noticed it in the dark. Rather than detach the boom in the choppy conditions I re-reeved the halyard fall through the ratchet block, deck organiser, and clutch.

Continued to motor into the wind while hoisting the main with two reefs given the freshening breeze. The delay meant Seatern was now approaching Hamble Spit so, of course, now the jib refused to unfurl! Motor-sailed until I’d cleared the Spit before sorting it out… the spinnaker bowsprit (which I store on deck) had jammed against the furling line.

With no traffic other than the ferries (which had recently gone past) I was able to make Calshot Spit on a single tack along the shipping channel and once clear of the shallows, hove-to to lift the outboard and use the Optimist bailer which serves as my urinal. At which point a speed boat planed close past the stern – no privacy in the Solent even this late in the year! On the other hand, apart from a single yacht some distance ahead, Seatern was the only sail – so different from the summer! 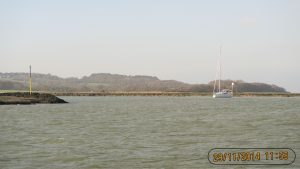 With a broad reach across the Solent I soon hove-to again and shook out the reefs. For some reason the luff would not tighten, even using the winch. Seatern began to surf on the following sea and the Tiller-Pilot wasn’t countering the broaching tendency so I had to steer! With the last of the ebb, we reached Thorness Bay by 0930 and I decided to continue on towards Newtown River. Started to furl the main and jib just after 10am but, with the tide now turned eastwards and against the wind, got swept back into the rough water over Newtown Gravel banks before starting to motor into Newtown River. 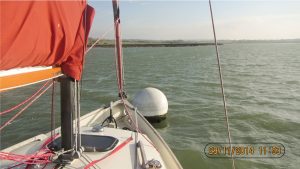 Having turned up the Clamerkin Lake river arm it was surprisingly windy and it took me three goes before grabbing the pick-up buoy on a white visitors mooring. Despite the mizzen being still set, Seatern spun away from the wind so I couldn’t go forward from the cockpit without passing the pickup buoy around the stern – which wrapped the mooring line around the rudder! I didn’t want to let go of the buoy so I used my lifeline to hold the mooring and clipped the other end to the boom gantry, before unclipping myself. I had visions of me ending up moored to the buoy and Seatern sailing away – a typical Peyton cartoon situation! With Seatern moored by the stern I could then raise the rudder and furl the jib before mooring Seatern properly at the bow. Of course, that was what I’d planned to do anyway! 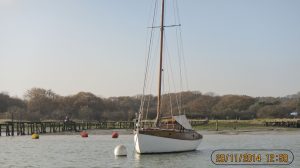 Having had lunch, slipped the mooring at 1150 and did a sightseeing tour up the Newtown River arm. During the summer this National Trust nature reserve had had the look of a crowded marina full of yacht masts, so I’d not come in previously. Being a Saturday, a few yachts were entering as I left, but nothing like what was here in summer. Remembering the morning’s experience, I motored beyond the gravel banks before raising the sails with a single reef for the close reach back towards Calshot. 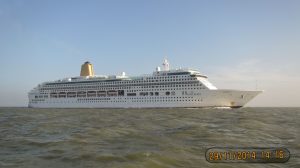 With the winds forecast to back I kept upwind as far as possible. With a strong flood against the wind the central Solent was full of breakers and again I was forced to sail Seatern myself and show the Tiller Pilot how to (mostly) avoid slamming the bow into the steep waves! I’d heard Aurora was coming out so eased off the wind slightly to keep north of the precautionary area. Aurora passed close to starboard before starting her turn; curiously with no passengers on deck – perhaps going to refit? 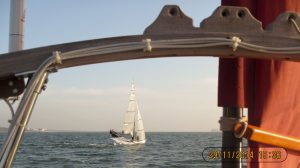 With no further traffic I was free to sail straight across the shipping channel before bearing away for the broad reach up Southampton Water. The wind was dropping but the current was helping me to maintain 4kts GPS so couldn’t be bothered to raise the spinnaker. Passed a couple of Finns with their low booms, and a 49er. I must admit the latter looked fun – but it’s a long way to fall if you capsize to leeward! Dropped the sails off Weston Shore and was back at the jetty by 1600 before it got dark. [34nm]