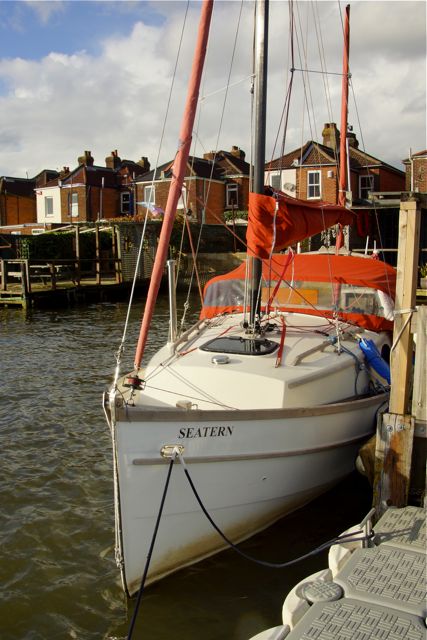 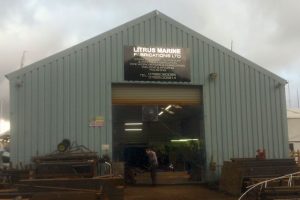 Well, a chimney actually! Last month I went to Hamble Point marina to visit the makers of the Bengco cabin heater with the hope of getting a chimney made for my “Pan2000” cabin heater. I was told that they were no longer in business but that Litrus Marine were good at stainless steel fabrications. After a quick discussion and some rough sketching, somewhat to my surprise I’d ordered a chimney! Not the way to specify a job… and I did go back a few days later with a better technical drawing of what I needed. They said 2 weeks and it was completed in 3 and a half which seems to be good for marine work! 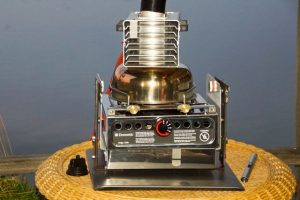 The “Pan 2000” heater I bought for Seatern is designed to sit on top of my Origo Spirit Stove. It consists of an upside down stainless “pan” surmounted by an alloy heat exchanger through which a 12v computer fan blows air. The gases from the stove go up through a pipe to be vented outside the cabin. It worked well when I tried it in my shed but when tested in Seatern it set off the CO alarm. I assumed the problem was down-drafts caused by the flow over the cabin top but since I wasn’t doing any over-night trips last winter and the weather was mild I didn’t pursue the problem.

Litrus provided me with a nicely made chimney in 50mm stainless tube together with a through deck fixing and a blanking cap for when the chimney is not screwed in place. Last week I made a 36mm wedge by laminating two pieces of 18mm marine ply and carving them to fit the cabin top slope. The through deck fitting is bolted through the cabin roof to a marine ply rectangle I fixed inside the cabin. Tests in the shed had shown that the exhaust is only warm having gone through the heat exchanger so I haven’t put in any insulation around the pipe work. 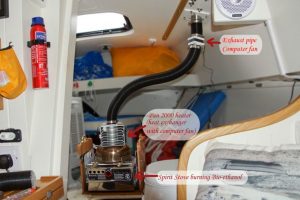 Sunday 9th Nov: Today I tested the heater in the cabin. As shown in the photo (and following what John Green has done on his boat) I incorporated a 50mm computer fan in the exhaust pipe. Had the heater going for about 40 minutes in which time the cabin temperature rose from 15C to 19C (it was 10C outside and raining). However the air from the heat exchanger didn’t seem that hot whereas the pipe work was getting much hotter than I expected (although not too hot to touch so safe enough). I think the exhaust fan is drawing the air through the heat exchanger too quickly. 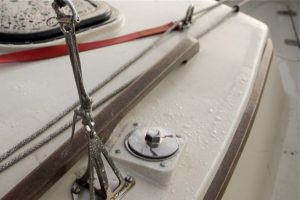 Monday 10th Nov: I slept in Seatern last night and used the heater this morning. This time I only powered up the exhaust fan for a few minutes while the exhaust pipe and chimney warmed a little. As I expected, with the fan off more heat came out of the heat exchanger and the top part of the pipe only warmed slightly. On the outside the chimney felt slightly warm and there was a slight trace of water vapour condensing in the outflow from the cowl. Success! 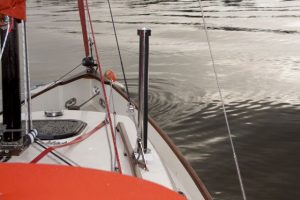 The really good thing has been that during each of the trials the CO detector did not show any CO at all. Normally it complains if I try to do anything more than make a cup of tea on the spirit stove inside the cabin. So all the combustion products (including CO and water vapour) are being vented outside. Time will tell if this holds for all wind directions but so far it seems promising. Next stage is to tidy the electrics and install some mounts to hold the stove box in place when it’s being used as a cabin heater.