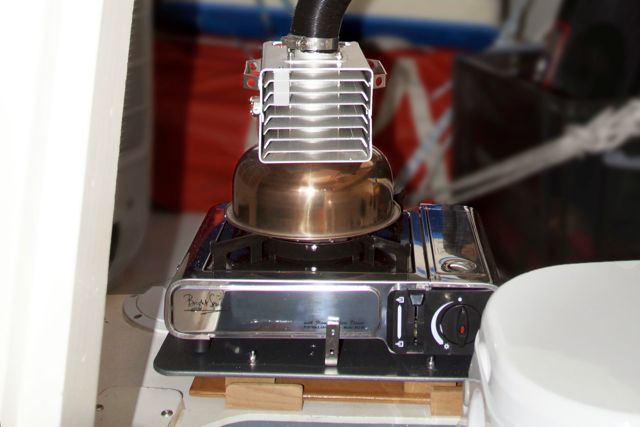 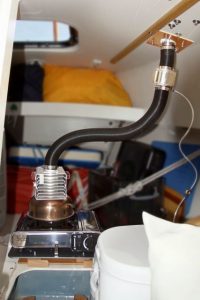 I now have the “final” version of the cabin heater that I’m very happy with. I’ve replaced the cheap “outdoors only” butane stove which I was using for experiments with a slightly more expensive “indoors” version. The has a better wind guard around the burner (!) but, most importantly, an automatic gas cut-off if the flame goes out. Perhaps because of the latter, it allows more control over the flame which can be turned down to “simmer”. The pan supports on the new stove were different and I’ve cut some notches to stop the PAN2000 sliding around.

I tried using the heater at the height of the gale in the early hours of 12th December and also this morning after a very cold night. As a result of these and previous tests I’ve decided that the fan is not needed, at least when using the gas stove. Nor do I think the condensation trap is really necessary. However it does sometimes trap water which otherwise might get as far as the heat exchanger and cause corrosion, so I’ve retained it for now. [Note added 18 Dec2014: I changed my mind on this and removed the condensation trap by substituting a straight piece of alloy tube as seen in the top photo.] 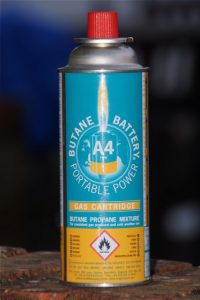 When buying gas cartridges on the web, it seems difficult to discover which are butane only and which contain some added propane for use in cold weather. I think that the ones which are 220 gm net have propane while those that are 227 gm net are butane only. My reasoning is that the propane has a higher partial pressure so to be within the maximum pressure, the cartridge has to contain less weight of gas. Even with the Brightspark “Butane Battery” cartridges which have propane, I’ve been keeping one in my sleeping bag overnight for use the following morning.

On the coldest morning (with 2C outside) the heater raised the inside temperature from 4C to 20C in 30 minutes. A warm cartridge at high power would only last 90 minutes – but would over-heat the heater in the process! I’m finding that one cartridge will provide around 3 hours heating or more. The cheapest on the web are a little over £1 each so a comfortable evening on the boat won’t break the bank. The heater would easily be adequate for a BC23; I have to turn it off sometimes on Seatern. The digital CO monitor (which does work!) has shown no trace of CO which implies that all the CO, CO2, and water vapour is being vented up the chimney.

It’s a nuisance that I will now have to carry gas cartridges for the heater as well as bio-ethanol for the stove. However the gas cartridges are relatively light in weight, while the spirit stove provides a source of heat which will work in the coldest weather.

[Note added August 2017:  I now also use a butane stove for cooking in place of the spirit stove so I only have to carry the gas cartridges.]