29th Dec: A trip up the Hamble 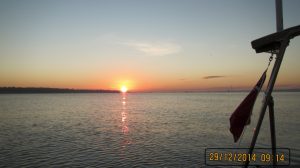 Slept onboard having already lowered mizzen, and detached boom and forestay to minimise having to work on the frost covered deck in morning darkness. Minus 2C in morning so decided to use Mullion X4 type worksuit to keep warm. Left 0630: Motored to Weston Shelf and picked up empty mooring to have breakfast and wait for light. The Davis Tiller Tamer had got frozen up making steering difficult until I realised and disconnected it!

0855: raised sail and was pleased at how well I’d left mooring under sail. With a light northerly wind I then wondered whether to raise the spinnaker. I was not watching the depth; Seatern ran aground and slewed round towards shore (those auto-release clam cleats do work!). By the time I got Seatern pointed towards deeper water we were in 0.5m and I was having to use the mizzen to steer. I’d have been there for 2 or 3 hours if I hadn’t have got off! 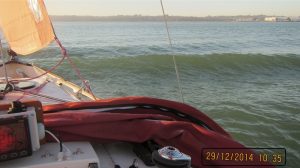 With the sun just coming up, and the forecast “4 or 5” I decided not to use the spinnaker but first to empty the ballast tank. However the pump didn’t work and we then started drifting off course; I guessed that water had frozen in the pump and my switching it on had blown the “battery 2” circuit fuse as well (or instead of) the ballast pump fuse. Thus the Tiller Pilot was now not working and the (string and pulley) Tiller Tamer disconnected. faced with actually having to steer, I hove to! In theory I could just swap the Tiller Pilot to the “battery 1” circuit – but it turned out that the wire was trapped and I had to unscrew the battery monitor panel to free it. While doing this three steep, near breaking, waves (see photo) set us rolling. Probably one of the RedJet ferries had passed. In Southampton Water you always have to watch for wakes, however calm the wind! 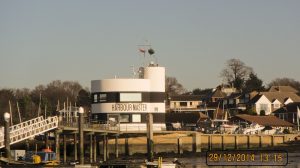 Temperatures were still around zero and knowing I’d have to beat back against a possibly freshening wind I planned to head only as far as Stanswood Bay (round the corner from Calshot), and anchor there for lunch. However nearing Hamble Spit I realised that there were hardly any boats coming out of the Hamble. I decided to take the opportunity of being able to go up the river without risking being caught in a traffic jam! having passed the Spit I lowered sails and started to motor up the river. The Harbour Masters Office was flying what I thought was a storm cone at first till I realised it was a Christmas Tree! 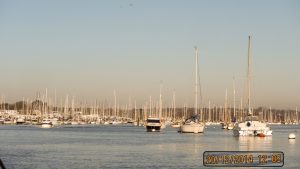 I’d only previously been a little bit up the Hamble in a RIB while doing “Powerboat 2” and hadn’t realised how horrific it is when seen from the water! A parking lot for boats which extends on and on. When on the shore there are nice bits – Hamble Quay with it’s pink ferry, the east bank marshes (I’ve included 3 photos from a past walk) – but you don’t really see much of those from the River; just moored boat after moored boat. And it feels unfriendly; if I picked up a spare mooring I felt a launch would come out to collect the fee – and anchoring anywhere is prohibited. Even the Jolly Sailor pub looks posh and unwelcoming viewed from the water. 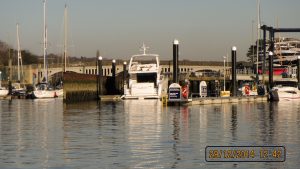 All the way to Bursledon Bridge and back and out of all those boats only 4 were actually moving – and one of them was Seatern! Got a good view of Hamble Spit as I left the river and anchored just south of the Harbour “no anchoring” boundary to eat lunch. I should have gone a bit further because two Sunseekers came in throwing up huge wakes – but there were only two. 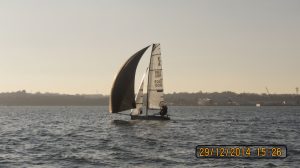 I couldn’t face tacking back up Southampton Water against the cold wind – the sun seems to loose any power soon after midday. So I raised the sprayhood and motored back; two guys on an International 14 were about the only other boat sailing. I slowing up in the Itchen so as not to get back before the tide. Once in the shelter of the river it was a beautiful late afternoon with the sun just disappearing as I tied up at the jetty. More of a motor than a sail, but I was glad to have done it and seen the Hamble – once!