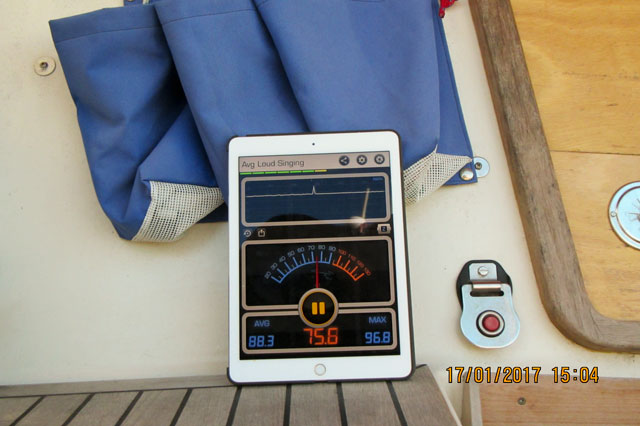 Yesterday I measured the sound levels following the outboard having been serviced. I had the same setup as on the 17th January. The results are shown below, where the top row of readings are those from January and the second row those from yesterday. As before, readings are in dB and represent the average of a few readings with the throttle moved each time. As in January the readings were remarkably consistent, usually to within 1dB. The most scatter was for setting 2 in forward gear where there was a scatter of ±2dB.

In general there was very good agreement with the previous results. The important change in the motor after servicing was that it cold be left ticking over without stalling and gear changing was far smoother with no tendency to stall. This time the outboard would run in forward gear at setting 1. I hope it remains this way – it was something I’d asked them to look at. 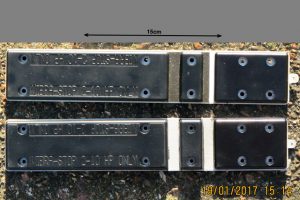 Today I fitted the Vibra-stop pads. I had to cut away part of the teak engine mount, but the operation was simplified by finding that the latter was only held in place by two screws. The bit I cut away was where it stuck out horizontally over the outboard well by a few mm. Up until now I had some marine ply fitted below the projection to give a smooth face for the outboard to clamp to. Now I needed to remove that so that the pads did not make the engine mount too thick for the outboard. Even so the outboard only just fitted over the pads and I may have a struggle when I come to lift it off.

Having remounted the outboard I took a new set of readings (bottom row in the table). Disappointingly there is no appreciable difference. Indeed, if there is any significant change it may be that the outboard is now noisier in reverse! So it has been a waste of about £116 in cost and of a bit of effort. I assume the pads will work on the larger transom of an aluminium runabout (as in the Youtube video) but that the motor is not exciting vibration of the smaller, wooden engine mount in Seatern. Possibly the only way to cut down the noise would be acoustic lining of the outboard well, which seems impracticable.