10th May: To Western Docks 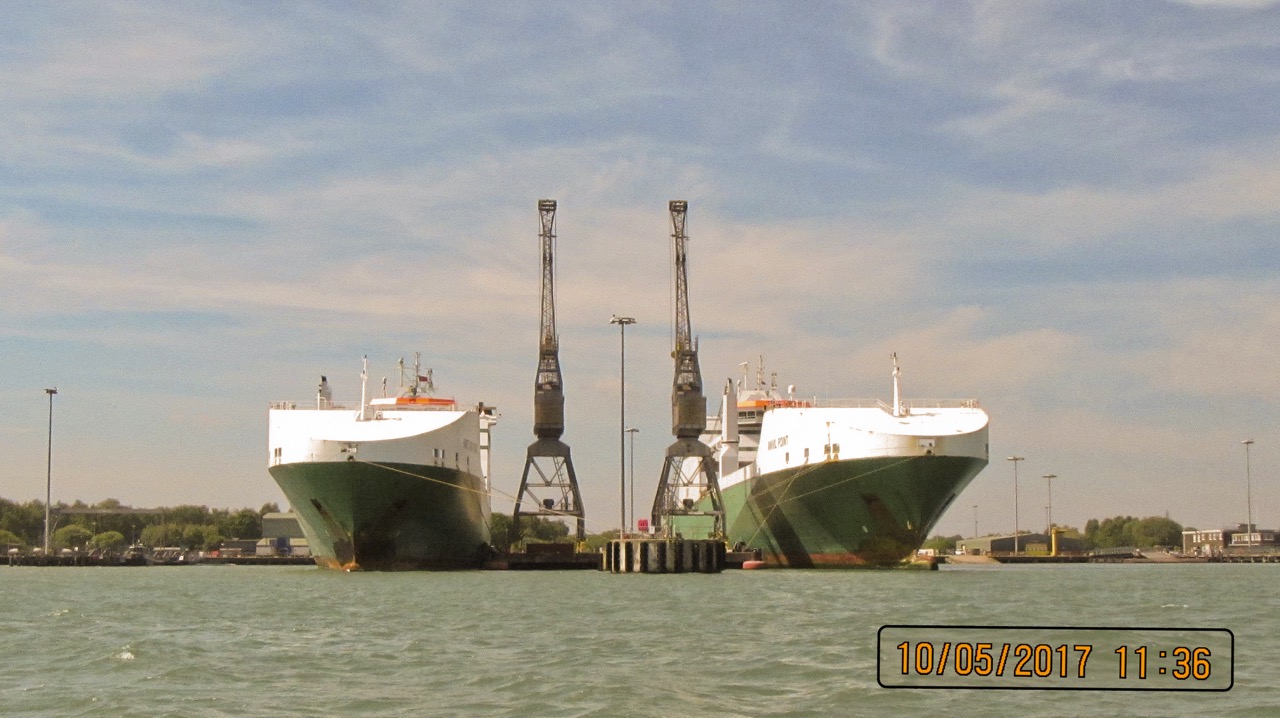 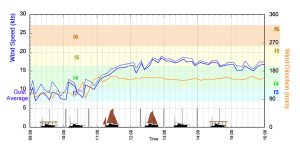 Was ready early and waiting for the tide to come in so decided to try lowering the mast while still at the jetty. Bad mistake! I thought the easterly wind would hold Seatern away but the wind was gusting southerly and I had a hard job trying to keep the mast-top instruments from catching on the jetty. I’ll stick to my normal practice of lowering the mast fully once Seatern has cleared the jetty in future! Anyway, managed to get away at 1004 by sliding Seatern along to the pontoon.

I kept to the Southampton water activities Centre side going under the Itchen Bridge and then motored across the channel to set sails – which all went smoothly. However winds in the river were up and down so progress against the incoming tide was erratic. The Alison MacGregor passed going up river just off Ocean Village and two crew came out and waved, however Seatern was in a gust and I didn’t have time to recognize who it might be. The wind was more south-easterly than easterly and I had to tack twice. The second time, near Dock Head, I tacked right in front of one of the Harbour Master’s Survey Launches, but it was either tack or hit the dock! 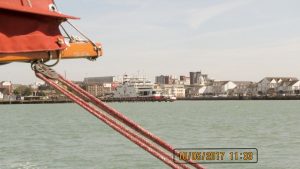 The south-southeasterly wind direction meant I would not be reaching up past the docks as I’d planned, but I decided to run up past them since I ought to have the current with me when tacking back. I ran up the west side of the ship channel gybing a couple of times and taking a few photos of the docks.

Nearing Marchwood Power Station I was keeping west of the many small boat moorings, the wind had strengthened, and the current was still going up river. Rather than going past the Container Port I decided to turn back. After four short tacks west of the moorings it was possible to do a long tack right across to the quay wall at berth 101. On the next tack towards Dibden Bay I decided to shorten sail. Seatern was sailing OK but I was pinching her up and spilling wind from the main in gusts. 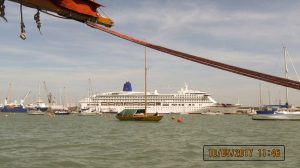 On going about I left Seatern hove-to and furled the mizzen. I then decided to put in a reef – which I should have done before furling the mizzen, since Seatern sits hove-to better that way. Once reefed Seatern was much happier and I put in four more tacks along the western side of the shipping channel to avoid the ferries and the Harbour Masters launch which appeared to be surveying.

Reaching across the shipping channel I could give Seatern her head and she was doing a good 5.5kts over ground despite the out-going flow from the Itchen. At Weston Shelf I started Dai and motored into the wind to get the sails down. With the long fetch down Southampton Water and the eastern Solent there was quite a chop off Dock Head and I waited until past the Ballast Quays before starting to prepare for going under Northam Bridge. Reaching the jetty I let Seatern blow into the pontoon with Dai ticking over in reverse. I was then holding her there on the boat-hook while the wind blew her around when the hand grip on the boat-hook came away in my hand! Fortunately I had one line attached and used that to bring Seatern into position. Given the wind there had not been time for more photos or even to eat lunch while sailing back!
[12.6nm].