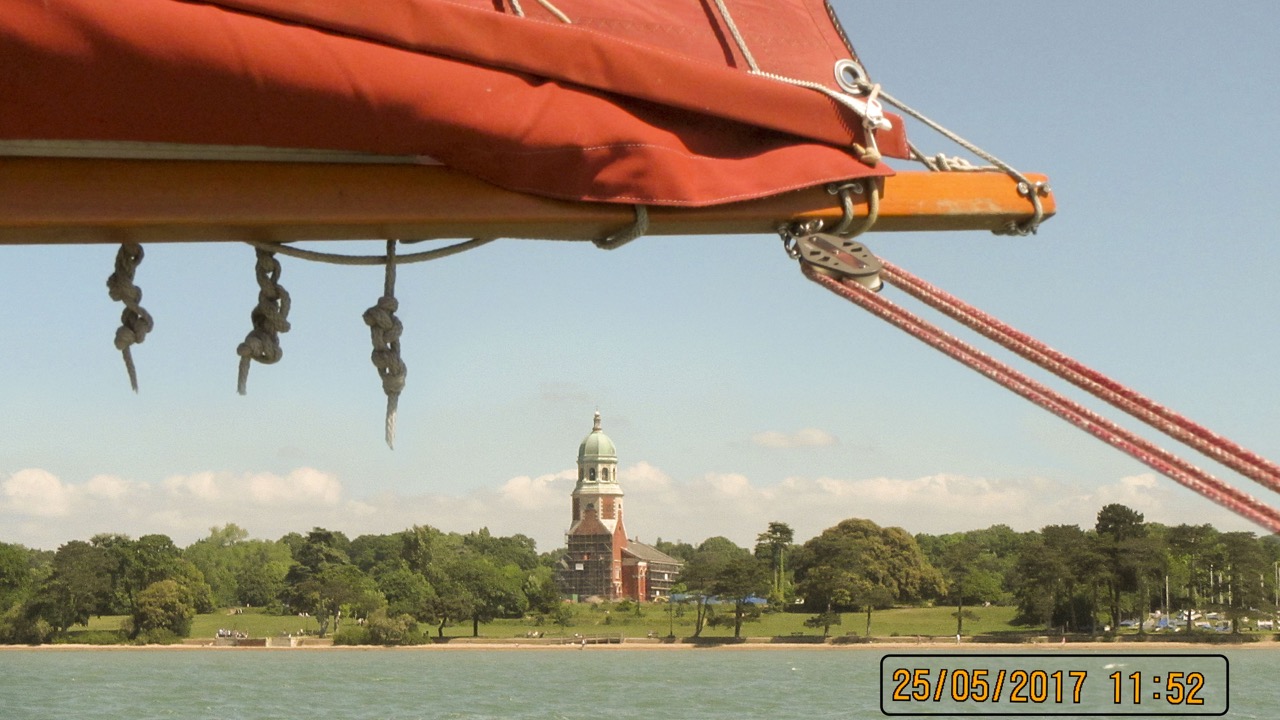 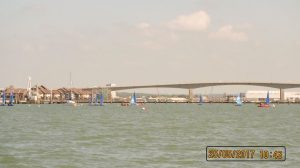 What the inshore forecast doesn’t say is that there is warm air advection and clear skies – tee-shirt weather even out on the water! While waiting for the tide there was little wind and I emptied the aft ballast tank. The forward tank won’t empty until Seatern is afloat and more level fore and aft. Having the tank empty meant Seatern floated early and I was away at 0938. However once under Northam Bridge the wind was picking up and I decided to refill the ballast tanks!

It’s the first “Southampton Sailing Week” and at the Water Activities Centre (SWAC) orange safety ribs were each towing out groups of five blue sailed training dinghies with young children in them. It sounded like a Primary school playground. Apparently it was a free “sailing experience” day for schools. 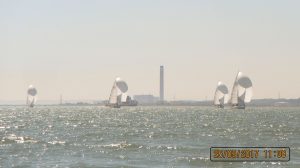 The “Sailing Week” is very much a commercially driven event and Sunsail were operating a corporate sailing competition with five of their boats. I decided to tack up the Netley shore staying inshore of the racing action. Meanwhile the wind was steadily strengthening. The Dock head met station showed it going from the top of force 3 to the bottom of force 5 during the time I was out. I furled the mizzen fairly early on and raised the centreboard to decrease weather helm. Soon I was having to spill wind but I hung onto full sail knowing I’d need on the run back. This was one of the rare occasions that I was sitting on the cockpit combing and sailing Seatern more or less dinghy style!

The sun was still shining and, despite the increased wind I was still in a tee-shirt – so rare in this country that I recorded a bit of video showing my bare arm and used it in a (very short) movie!.

Once past Victoria Country Park I decided to start the run back. I managed to get the jib goosewinged although I still have not managed to use the whisker pole I made last year. Off Weston Shore I progressively hardened up and, with time to spare on the tide, decided to reach across towards Hythe (with a couple of swerves to give way to shipping!). Reaching back Seatern was singing along. Dai started on the second gentle pull and I motored upwind to drop the sails and tidy up. Back at the jetty at 1332. [13.6nm]