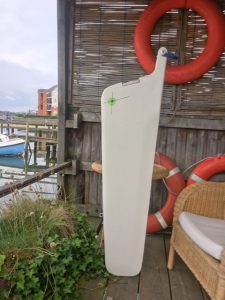 In July I’ve offered to take some scientists from MBA in Plymouth out on the river to sample fouling on fixed structures. I’ll be using the Seafly so I needed to finish stripping and repainting the Seafly centreboard. I removed it many months ago but it was clearly going to be a significant task so I needed a deadline to make me tackle it!

Centreboard: I stripped the varnish back mainly using the belt sander, then finishing with the orbital. I then coated it with 3 coats of International Interprotect primer – which is described as a “High Performance Epoxy Polyamide Primer/Undercoat”. It’s the first time I’ve used a 2 pack paint and I really struggled with it. Despite the small area I couldn’t keep a wet edge. It’s also fairly nasty stuff with an irritating vapour so I needed to do it outside which, given almost a week of rain, meant out on the shed staging, part of which has a roof.

I finished with 2 coats of International Trilux 33 antifouling. The centreboard doesn’t really need antifouling but they make it in smaller tin designed to be used for the boot-top, so that’s what I used. The whole job took several days since I could only do one side of the board at a time and, after the first day or two the temperature dropped (from 23C to 16C) which lengthened drying times. I felt like one of those police crime scenes people with white protective overalls, latex gloves, and eye-protection!

The coloured markings on the board are an attempt to make it easier to line up the bolt hole when I reinsert the board. I’m planning to do that tomorrow (1st July) having allowed the paint time to harden properly – the Trilux specifies 30 hours before immersion at present temperatures.

Seatern Battery: On the last two trips the Chartplotter has started complaining about low voltage about half way through the day, causing me to switch on my emergency “power generator”. In the past I’ve returned from a trip with 80% battery capacity left so it seems that the 100Ah Yuasa Marine battery has come to the end of it’s life. I’m a bit surprised since it was bought in June 2014 and has not had a hard life, being charged by an “intelligent” Ctek M100 charger when Seatern is at the jetty.

I have a second battery (of the same type and bought at the same time) which was also used in Seatern in the days when I was trying to manage with the Torqeedo outboard and therefore had two batteries onboard. Since then it has, hopefully, been kept conditioned by a Ctek charger. Swapping the batteries will mean removing the floor boards on the starboard side. If I’m going to do that I may as well remove the temporary cable which runs under it to power the fridge and replace it with a proper cable. To do that I have to remove the port seat cushion and also lift the sink so I can get to the cable run. I also need to lift out the fridge from the port forward locker recess. When I did that I found that it was wet under the fridge…. swapping the battery proved to be a day’s work!

It turned out that the hatch into the ballast tank in the port locker recess was not down tight. The starboard hatch is sealed down and I’d some how assumed the port one would be. I’ve now closed it using Fernox LS-X to seal the threads and stop it undoing. I discovered that the power for the fridge was originally coming from the port 12v cabin supply which also supplies a 12v socket over the “table” and the LED lighting. That meant there would be 2 or three junctions on the way to the fridge and the resistance must have been enough to trigger the battery protection mode on the fridge long before the battery needed protecting. I’ve now run a direct cable from the fridge back to the battery via it’s own fuse and connector.

When I got the battery out the indicator window was indicating that the (fully charged) battery needed charging (i.e. black) whereas the battery I was replacing it with showed charged (i.e. green). Hopefully this new battery will last for this year at least. During the operation I lifted both port and starboard floor boards and cleaned than as well as cleaning all the dirt from the “bilges”. Mainly it appeared to be my hair, perhaps that’s why it’s missing from my head! So now Seatern has clean bilges, if you can call a one inch space under the floor board a “bilge”!