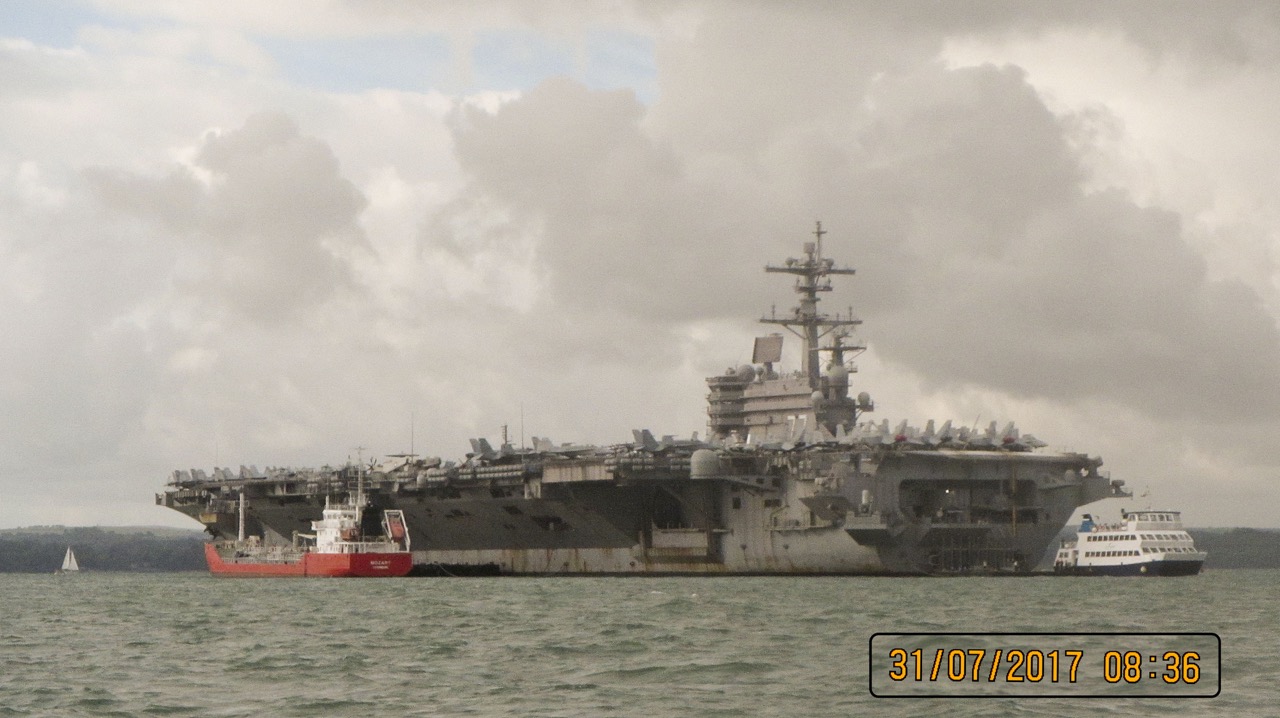 There is a large US aircraft carrier moored in Stokes Bay which I though I’d go and look at. I was planning to sail on the Tuesday but woke up early on Monday 31st and decided to go. I would have got away before 0500 but the centreboard would not drop and I had to take the table top off the case to free it. First time it has happened so can’t really complain given that Seatern dries on gravelly mud twice a day. Left after the weather forecast at 0530. 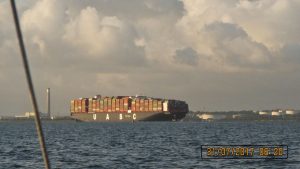 The sky looked like it could become squally so I had breakfast before hoisting sail. The early morning sun in the east and dark clouds in the west resulted in some dramatic lighting of the in bound ships in Southampton Water. Even Fawley Power Station looked impressive. The wind direction promised a broad reach and I started to rig the asymmetric until some ominous gusts suggested not. Given that I’d be against the ebb tide I was hugging the shore at Hill Head. The clouds didn’t look that deep but around 0750 the rain radar was showing some heavy rain approaching and I rigged the door curtain and furled the mizzen. Soon there was rain to the north and also a rainbow over Cowes. 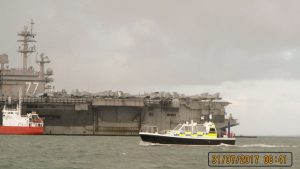 Soon after 0830 Seatern was approaching the carrier which appeared to be bunkering. Wight Scene was standing close by, I assume she was acting as a ship to shore ferry. I wasn’t sure what the exclusion zone would be, but a Police launch started to approach and I bore away to show obedience. Later, on the VHF, I heard it was 250m. There was also a Police rib and another Police launch came out from Portsmouth, presumably to take over watch. It’s funny that something with so much fire power needs protecting from Seatern! 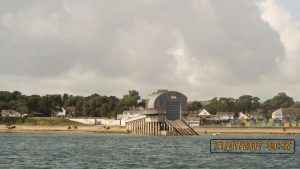 Having got to the carrier much quicker than I was expecting I wasn’t sure what to do next. I decided to continue southeastwards along the Solent. It was a reach but both wind strength and direction were unsteady, varying to give between a close to broad reach and from needing more wind to spilling wind from the main. At 0938 I noted that I’d just past Seaview and that the wind was dropping. Although it picked up again, when I reached the Bembridge Lifeboat Station at about 1000 I decided to head back – I’ve ended up fighting a loosing battle with the flood tide in the eastern Solent on a number of occasions! 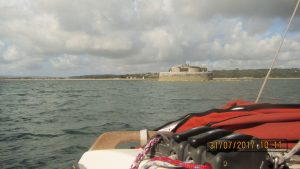 Trying to avoid the tide, I stayed closer in to the Isle of Wight shore and, having passed close to St Helen’s Fort I found myself amongst the many moorings off Seaview. The wind had now picked up again and Seatern was something of a handful sailing amongst the moored boats. What’s more I was heading into the lagoon area inshore of the Debnigo bank. I sneaked over the north part of the latter keeping a close watch on the depth. Once between the Debnigo and Ryde sands I took the opportunity to reef the main and attempted to go direct to two reefs. For some reason the clew would not pull down fully and I was conscious that the boom might hit the boom gallows if I tacked. Soon after I was crossing the northeast corner of Ryde sands and passing a yacht well aground. The guys on board were having a drink while waiting for the water to come back. At one point Seatern had less than 1.2m but the plate was not fully down and did not touch. 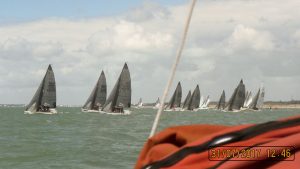 Thinking I’d get embroiled in the Cowes Week races if I hugged the Island shore I crossed towards the mainland, once more passing the carrier. I got into shallow water at Lee Point so stood further out passing Lee-on-the-Solent. There was a huge mass of yachts off Hill Head. I didn’t want to go all the way inshore since that was downwind but I was on port and they were coming out on starboard. I had to tack and, as anticipated, the boom fouled on the boom gallows. Seatern dropped back some distance while clearing it; meanwhile, the racing yachts had tacked back inshore. It tuned out there were two separate races about to start and the yachts were doing practice starts. In the end I had to wait for the start proper and could only carry on once the too fleets had passed across Seatern’s bow. 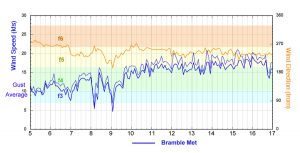 It was a close reach down Southampton Water. It was still gusty and I was sailing Seatern more like a dinghy, sometimes surfing, and generally making about 5.5kts. I got back to Weston Shore too soon for the tide but was beginning to feel tired. Having dropped the sails and tidied up I motored up the Itchen and anchored on the edge of Chessel Bay until there was enough water to get into the jetty. There was still a strong southwesterly so I looped past the jetty so as to approach the pontoon going into the wind. The winds had seemed stronger than the “upper force 4 gusting force 5” registered at Bramble and at Calshot Spit but I think that was because they were very gusty, varying in strength and in direction. Back at 1627 after 42.7nm.