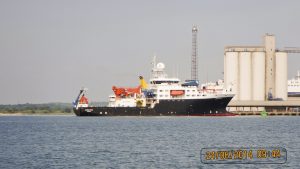 0830: Left jetty as soon as there was enough water. Motored down to Weston putting the mast back up underway. 0930: started to put sails up off Weston but again forgot to shake out plaits from the reefing lines so took 15 minutes to get rid of knots. RRS James Cook came in while I was doing it.

1030: With lightish winds I pumped out the ballast using the small submersible pump. What a difference! Seatern became responsive to each wind increase. It makes me realise how little of my sailing so far has been in light winds. Often I’ve been reefed or thinking about it. 1123: at Coronation buoy, wondering about trying the asymmetric.

1155: filled ballast tank as a precaution before rigging the asymmetric. While I rigged it to launch on port tack the wind came round astern. 1225: on starboard tack under asymmetric having set it with wind on the port quarter and then gybed. So far so good! 1330: Solent CG “winds var force 3 or less (true!) bec E or NE 4 or 5” (actually they freshened from west in afternoon and became NW in evening).

1350: while gybing off Browndown Battery discovered that I could happily sail down wind goosewinged. By now I had emptied the ballast tanks again so had to be careful – dinghy experience suggests getting into a “death roll” would be a possibility! But she sailed beautifully at one point getting up to 5 kts over the ground despite the light wind. 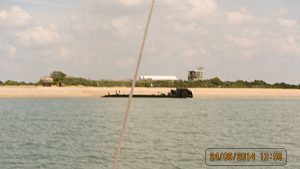 1400: all ships call from Solent CG saying there would be a controlled explosion at a position which turned out to be roughly where I was! Fortunately I had 30 mins to get clear; There was some sort of landing craft at the beach, which initially looked like a wrecked submarine. I suspect that had been preparing the target.

1445: Explosion delayed until now – heard the boom but no great column of water! Approaching No Man’s Land fort in very light wind. 1523: asymmetric dropped and bagged, as was main sail. No wind so start motoring. Spotted balloon in water with something attached, circled and saw it was a balloon race postcard – left it for someone else. Later on saw more of them so it hadn’t come far – more marine pollution! 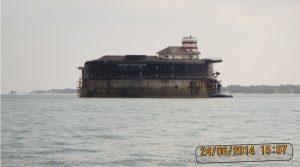 1545: wind increasing so filled ballast tank ready to reach back, however to came round to westerly so carried on motoring rather than tacking. Have current against me so heading inshore towards Gilkicker Point (by 1630 close inshore there). 1745: wind coming round more SW and stiffening so got sails up. Main halyard caught on spinnaker mast fitting – must tidy the mast up. By time sails were set the wind had dropped and become variable. Tried tacking for short time but little progress. A Moth came past on foils, one of the fastest boats today! In theory I should have given way to it but it had come and gone before I could have altered course! 1840: motoring again.

1954: at Hamble oil terminal; wind has increased significantly but from the NW so would still be tacking! Carried on under motor. 2040: entered Itchen; 2125: back at jetty, all stowed by about 2200.