No sailing but a busy week! On the 6th Simon Crawford from Marineware came (at Matt’s request) to look at the small blisters in the paint work on Seatern’s transom. Like Matt (see 12th September entry) he was puzzled as to the cause but took away samples for analysis. With the good weather gone, on the 7th I drove over to Hamble Point Mariner and ordered a chimney extension for my cabin heater, not sure how it will turn out! I’ve also ordered a computer fan for inside the flexible tube in the cabin.

The 8th brought the first Environment Agency flood alert although at only 5.2m it only threatened some gardens nearer the Public Hard. The tide on the 9th was slightly higher plus there were strong winds (see photo above). When I extended the jetty uprights higher in preparation for Seatern I didn’t expect them to be used as frequently as they are! On the 10th I got a towbar fitted to the car so that I can get Seatern out of the water at the Public Hard when I need to. Not that long before she will have been in the water for a year – except when the tides out that is! 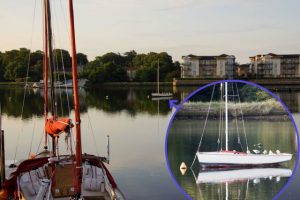 On the 11th I did some more inconclusive electric outboard tests (see 28th September entry). Then Jim from Adelaide Rd was trying to get his Wayfarer to the Public Hard from the pontoon at number 90 where it had ended up having broken its mooring during the first storm. With the wind freshening, they only got as far as the pontoon at the end of my jetty. I helped them by putting the Torqeedo on the Wayfarer and motoring round to the hard. Carrying the Torqeedo back to my house I realised the shed door was closed with my keys on the water side, me on the land side, and the tide in for at least two or three hours more! Had to wade waist deep to get round to the jetty ladder!

Finally, on the 11th I installed a NASA close-haul wind repeater on the hatch top instead of the readout from the paddle-wheel log. The latter never worked and I’m now using the through hull fitting that housed the paddle wheel as the inlet/outlet for the pumped ballast system. I’ve always assumed we chose the wrong location for the sensor. However a letter to PBO this month suggested that having copper-coat anti-fouling might interfere with NASA log readings; I’ve emailed NASA to see what they say!