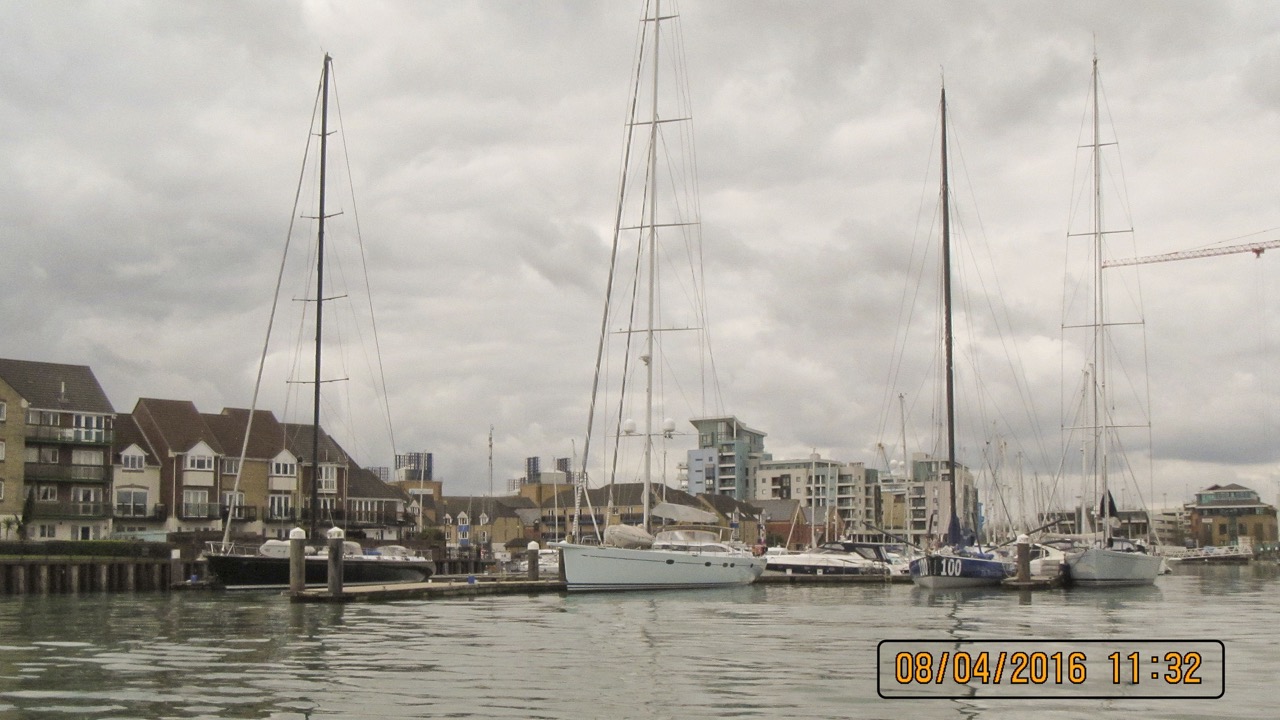 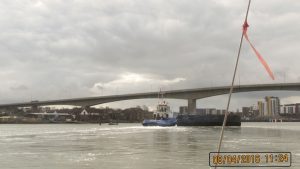 A few months off and I forget how to do things! Would have got off at 1045 but forgot to undo aft mooring warp – left by 1050 having also had trouble lowering the centreboard. Going down the Itchen met Alison MacGregor on crew training trip near Shamrock Quay. She turn and was following me, then Willpower pulled off a quay with a barge. I went the other side of the boat show pontoons to keep out of the way and finish rigging the mast. Then near Empress Dock, where I hoisted sail, was surprised to see the “Gosport Lifeboat”! 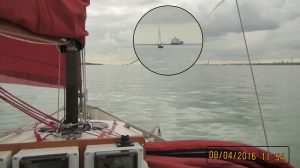 Despite the forecast there was practically no wind. I pumped out the ballast tanks and left the Tiller Pilot “Ray” steering while I had a Cornish pasty for lunch. Seatern was ghosting down current and overhauled another small yacht, “Mischief”, which had I had originally seen in the distance. In light airs and with ballast tanks empty the difference in speed over a conventional small yacht is almost embarrassing – and that’s with all the extra weight that Matt thinks I’ve added! 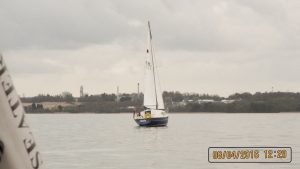 Conscious that going back was against the current, I turned at 1230. Seatern was now slowly making ground on a close reach if the wind strengthened only to loose ground in the calmer intervals. I was getting the outboard “Dai” ready for use when I saw the water darkening near the oil terminal jetties. Although that was upwind of me three dinghies off Victoria park were sailing towards me on a broad reach. 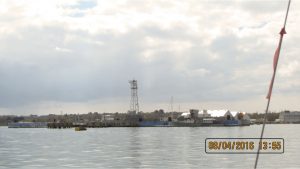 I waited and at about 1300 the wind started to increase being now on the port quarter. I hardened up a bit to work more to windward while there was some wind. It started to drizzle heavily and I was torn between getting my anorak on and putting the curtain over the companionway, at the same time starting to fill the ballast tanks! Then the wind increased and , with the tanks still more or less empty, I had to sail Seatern to make sure we stayed upright. We were now doing 4.5 kts across the current and heading for the shipping channel. As I bore away the wind dropped and we were once more nearly becalmed. 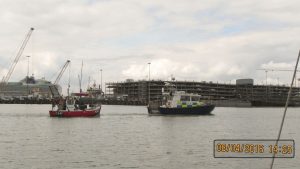 I started Dai and furled the jib and motored across to the Hythe side of the shipping channel where I left Seatern drift while I got down the main, furled the mizzen, and tidied up. One of the Red Funnel ferries was coming out so I motored slowly up the west side before crossing the channel. Near Dock Head the police launch Preventer was boarding a broken down fishing boat which they then towed up the Itchen just ahead of me as far as the old British Hunter pontoon at Lauren Marines. 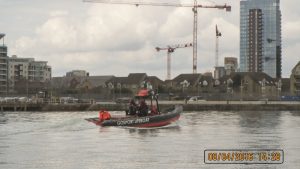 I was passed by the Gosport lifeboat which I’d seen at various times during the day doing what looked like “speed trials”. They were heading for the Dry Stack. I made a hash of coming into the jetty having to have three goes before I got lined up. I realised afterwards that I’d pulled the centreboard all the way up – I really do forget how to do things!