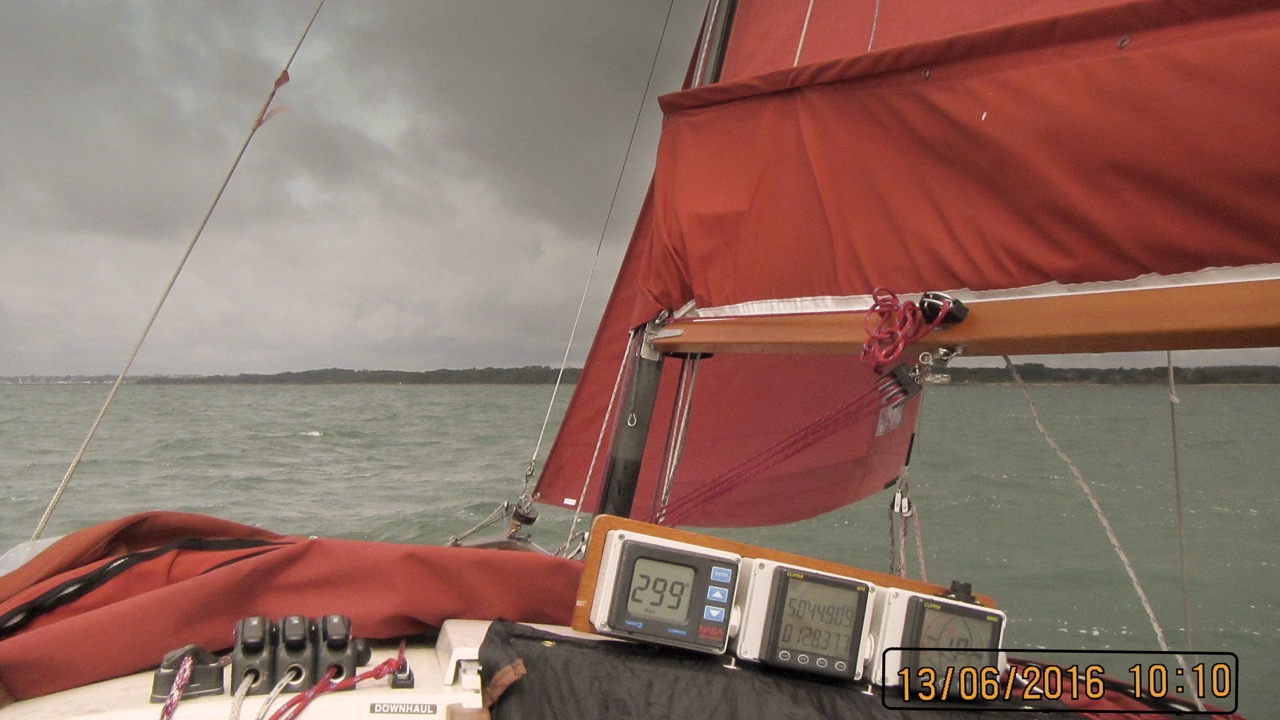 Got up 0345 – rain radar shows large area of rain over SW England. However tide was good and Seatern has been at the jetty too long so I convinced myself that it would mainly pass to the north. Left jetty at about 0535 after the shipping forecast. 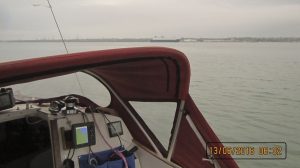 A light westerly meant a bow on apparent wind off Ocean Village so raised sail there and bore away along Weston Shore. Light rain had commenced so put up the spray hood to give shelter for having breakfast. A grey morning – the sea was steaming at one spot off Fawley, something I’ve not noticed before. Anticipating more wind in the Solent and a beat westwards I left the ballast tanks full and, at 0720 off the BP jetty, put in a precautionary reef. No other yachts around until a gaff rigged cutter came out of the Hamble.

Reaching Calshot just before 0800 I called the Tower to ask if they had their breathe back. There were no other yachts around except a gaff rigged cutter out of the Hamble. Despite having one reef, Seatern rapidly climbed away upwind from the Cutter – no doubt she would outpace me with more wind or on a run. In fact the wind was increasing and after skirting Calshot Spit I put in a short port tack to keep out of the Thorn Channel and took the opportunity to furl the mizzen. Then, after a long tack towards Gurnard, on the next port tack at around 0910 I put in a second reef. By now it had stopped raining and with the spray hood lowered I had put the door curtain in place as a precaution. 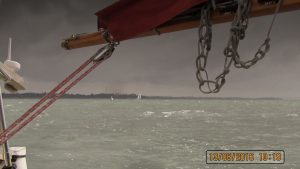 By 1020 I was approaching Lymington. Inland it was still very dark with heavy rain visible. Seatern’s tacks over ground were now less than 90 degrees as the flood began to set in. Most west bound yachts had been motoring with sails furled no doubt intent on getting through Hurst Narrows before the flood.
A single large bermudan cutter with “Discover Sailing” on the hull beat past me – it turns out she’s the “Thermopylae Clipper”, a 60′ sail training vessel. There was clearly no point in Seatern trying to beat through Hurst Narrows so I decided to tack in behind Hurst Spit. Really I should have dropped anchor but feeling lazy I attempted to heave to. I had to unfurl the mizzen to get Seatern to sit comfortably – probably the effect of the current plus wind. I put up the spray hood and had lunch while Seatern drifted at a bit over 1.5 kts towards Yarmouth. 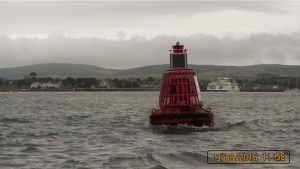 By the time I started sailing sailing back at around 1150 the flood was well underway. I left the two reefs in and goosewinged the jib using the new whisker pole. The latter is designed for the asymmetric so is too long for the jib but it worked by clipping it to the spinnaker tack line and wedging it against the leeward hand rail. Surfing on the passing waves, Seatern was touching 8 kts and averaging just under 7 kts. I had to steer since the tiller pilot (“Ray”) doesn’t anticipate the waves well enough! 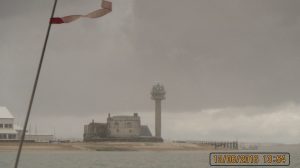 Approaching Calshot there looked to be torrential rain ahead. Being ahead of time thanks to the run, at 1300 off Gurnard I decided to drop the main and continue under jib and mizzen. By 1340 off Calshot Spit with heavy rain, the visibility was very poor – I had switched on the Nav Lights – and worried about crossing the shipping channel I furled the jib and mizzen. To my relief, Dai started straight away and I motored around Calshot Point whereupon the rain stopped in time to see both Red Jets plus one of the ferries go past. Knowing that I was now clear to cross the channel I did so at 5 kts before throttling back for the plod up Southampton Water. By the time I was off Calshot spit the rain had cleared and the wind gone down so I unfurled the jib and said my thanks to Dai. 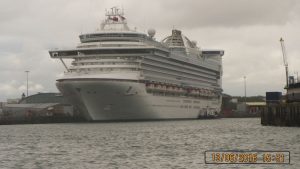 I was approaching the Itchen with an hour or so to spare for the tide. Various work boats had been passing on their way to the Seawork Conference/Exhibition in Mayflower Park. I decided to go and have a look there. However heavy rain was again threatening so rather than go past Dock Head under sail, I furled the jib and started Dai. Seawork has clearly grown and this year has taken over Mayflower Park… supposedly a facility for the residents of Southampton who lost their beach when the Western Docks were built! 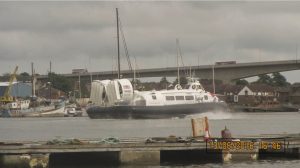 I recrossed the shipping channel between ferries at Dock Head and motored leisurely up the Itchen (although the tide was carrying Seatern along in any case). Near American Wharf I was surprised by a loud noise which turned out to be the new, Union Jack fronted hovercraft I’d seen the other week. Apparently it’s going into service on the Southsea – Isle of Wight run this summer. Back at the jetty at 1716. [48.6nm]