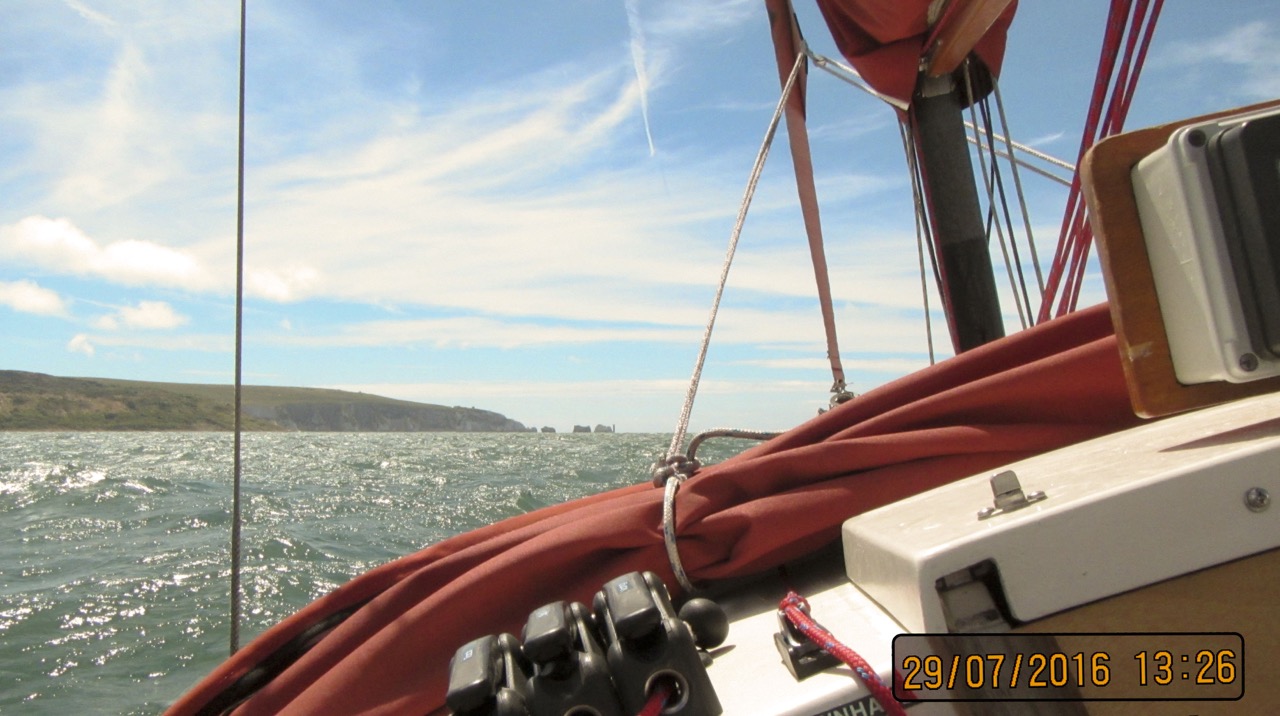 The idea was to sail out to the Needles area, however I was in two minds about whether to go since there was a weak front heading southwards across the country and I didn’t fancy beating against strong winds. But each MO forecast was suggesting less wind, and early Friday morning the winds at Calshot Float were decreasing (Bramble Met Post was not working). Having woken early I decided to go, and actually had time for breakfast before leaving! 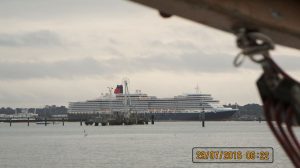 Managed to get Seatern afloat to leave by 0545. Hoisted sail after going under the Itchen Bridge – the Queen Elizabeth was in-bound at Dock Head. The wind was a light broad reach in Southampton Water and I kept wondering about setting the asymmetric. However I didn’t totally trust the weather, there were occasional gusts and the low clouds were visibly moving across the sky. 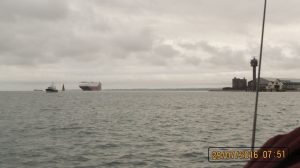 I reached Calshot at around 0800. SP (the Harbour Master’s launch which had previously passed me “outside the greens”) was hovering nearby as an incoming car transporter and an outgoing container ship were due to pass each other in the Fawley Deep area. With the container ship approaching I started Dai in order to motor-sail across the channel just past the Esso jetties and then kept close in to the Calshot Spit end before cutting across the (underwater) spit.

Having put in a short northwestward tack to keep away from the shipping channel it was clear that the wind was beginning to increase. I furled the mizzen, ten minutes later put in a reef, and ten minutes later again, put in a second reef. Soon after that I had the washboards in place and the companionway hatch closed in case a wave leaped aboard! So much for weather forecasts… In fact the wind increased steadily and became a good force 6 by the afternoon. Off Gurnard I noticed that the starboard “cockpit scupper well” was full and for the first time ever opened the self bailers to drain it. I’m not sure how the water got there – I didn’t notice that much spray. 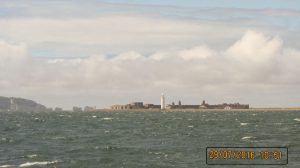 With the help of the ebb tide it only took a few tacks and a couple of hours sailing to reach Hurst. With the wind increasing and the ebb still flowing against it I didn’t fancy beating through Hurst Narrows so I started Dai (my Tohatsu outboard) and furled the sails. I decided to anchor in Hurst Roads in the shelter of the Spit and have lunch. On the first attempt the anchor didn’t hold (the first time it has failed me) and came up covered in weed. I motored in closer for the second attempt and was successful.

After lunch the anchor again came up weed covered as I prepared to motor through the Narrows at slack water to see what conditions were like. I was glad I’d not tried to sail through! The video doesn’t really convey how rough it was. Seatern was only making a couple of knots but was still being thrown about by the waves. However I’m always impressed how dry Seatern is, the high bulwarks at the bows seem to deflect much of the spray. It was still rough beyond the narrows and getting to the Needles would have taken ages so I turned around and unfurled the jib to sail back home. 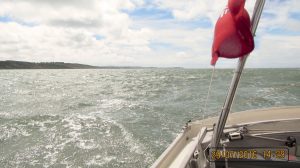 Once past the Narrows I managed to set the mizzen whilst still running. Seatern continued Eastwards at a good 6 to 7 kt over the ground only slowing as I hardened up a little at Calshot Spit. I was aiming to keep on a broad reach to cross the shipping channel quickly before hardening to a close reach up Southampton Water. However a larger yacht under motor with sails furled was coming at me from starboard heading straight along the channel towards Hamble. At the last moment I had to luff up to let the yacht pass ahead. I gave a “what was all that about” sort of gesture to which I got a friendly wave in reply. I can only assume that they thought I was motor sailing – something which has happened before when Seatern has been under jib and mizzen. All the same, given the wind strength, there were many yachts sailing downwind under foresail only, they should have known to give way. 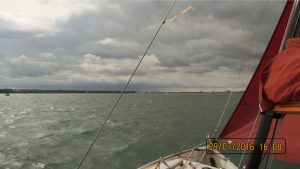 Once reaching towards Hamble, Seatern was well heeled even under jib and mizzen. I called Calshot Tower passing Hook (“Hook inbound”). I was about an hour ahead of schedule for the tide so at Netley I furled the sails and started Dai. 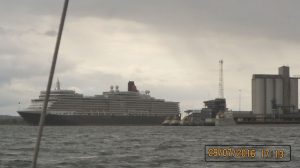 Nearing Dock Head I heard that the Queen Elizabeth was about to depart so I idled around to watch her leave. By now it was really gloomy – I switched my nav lights on although it was only around 1715! The rain passed inland, apparently further north there were reports of funnel clouds. Once QE had left I turned for the Itchen and Dai speeded up of his own accord! Back at 1826. Although Dai has been starting well, I’m having trouble with slow running. It’s hard to slow Dai down enough to change gear without stalling – I need to find out if there is an adjustment, or a jet which needs cleaning. [47.4nm]