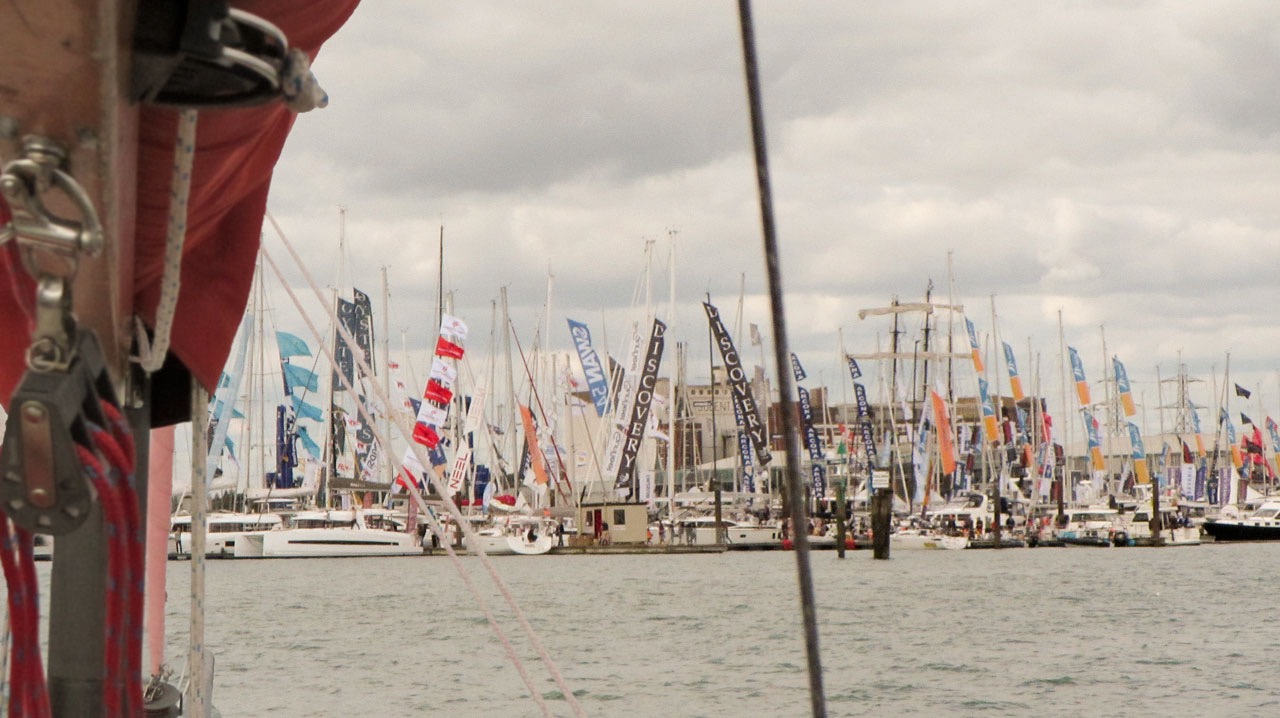 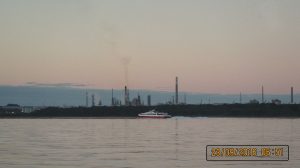 The plan was to go out on the morning tide and sail probably to Cowes, then return and sail past the Boat Show before returning home. Left the jetty at about 0530 on what seemed a very dark morning. Spotting unlit objects in the river (like the Admiralty buoys) was difficult but helped by the glassy calm water surface reflecting the city lights everywhere where there was not an object! Smoke was rising vertically from the refinery stacks and there appeared to be fog in the Western Docks although there was no mention of it on the VHF. 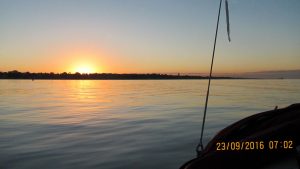 I was in no hurry so despite the lack of wind, set sail once I had cleared the Weston Shelf mooring area. What wind there was seemed to be from the east and I was hard put to stay out of the shipping channel. By 0710 I had had breakfast and I pumped out the ballast tanks. Seatern had little steerage way and was mainly drifting on the ebb. Whenever there was a little wind I tried to angle her back to the east away from the channel. Becalmed at the Greenland buoy I called up Calshot Tower and asked if they could see my AIS – it was not on the main chart but was visible on the Marine Traffic web site… I now suspect I was too far from the Tower. 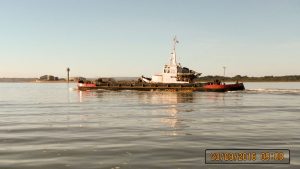 Calshot had said they had 4kt wind but by the time I got there it was flat calm. I started Dai and motored to a position over the mudflats opposite the “House red roof” which was clear of fishing markers (!) before dropping anchor at around 10am. There I had an early lunch before a bit of westerly wind picked up. I had left the mizzen set, so I prepared the asymmetric before re-hoisting the main and weighing anchor at 1113. 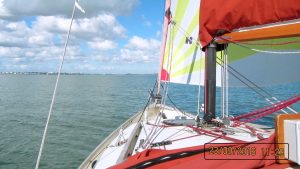 At last we were sailing although it was rather a close reach for the asymmetric. I filled the ballast tanks “just in case” and wondered whether I could fly the asymmetric past the Boat Show. Then approaching Netley Country Park the wind changed in an instant by some 90 degrees or more – from port beam to off the starboard bow.

The asymmetric was totally aback and plastered against the mast and shrouds. I got it down and unfurled the jib. Soon after Seatern was hit by a huge gust which sent her heeling into the wind as I dived to free off the mainsheet. Seatern recovered and we continued in winds which alternated between big gusts and near calm. I didn’t fancy sailing past the Boat Show in those conditions so started Dai and furled all the sails. 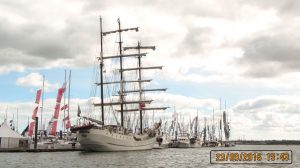 The old QEII Terminal is now devoted to stacking cars and loading the huge car transporter ships. Beyond that we crossed the ferry paths into Town Quay before reaching the remains of Southampton pier and the Boat Show pontoons. The square rigger Artemis was the best looking vessel, although there do seem to be more yachts in the marina nowadays. Seatern seemed to attract the interest of a group on Artemis – pity she was not under sail! 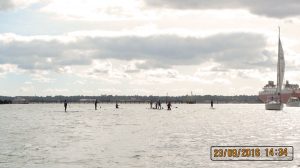 Returning around Dock head and entering the Itchen there appeared to be people walking on water. Presumably they were a Paddle Board class at the Southampton Water Activities Centre situated under the Itchen Bridge. With the tide flooding and a southwesterly wind Seatern made too good time up the river and I had time to get the masts back up and sorted out while motoring as far as the railway bridge before there was enough water to return to the jetty. There I let Seatern blow sideways into place but I was now starboard to. In turning her around she blew around the pontoon and I had manhandle her back before I could get her around and into place port side to. I’m thinking of extending the pontoon slightly which may help and would allow me to keep my canoe on it. [27.2nm]