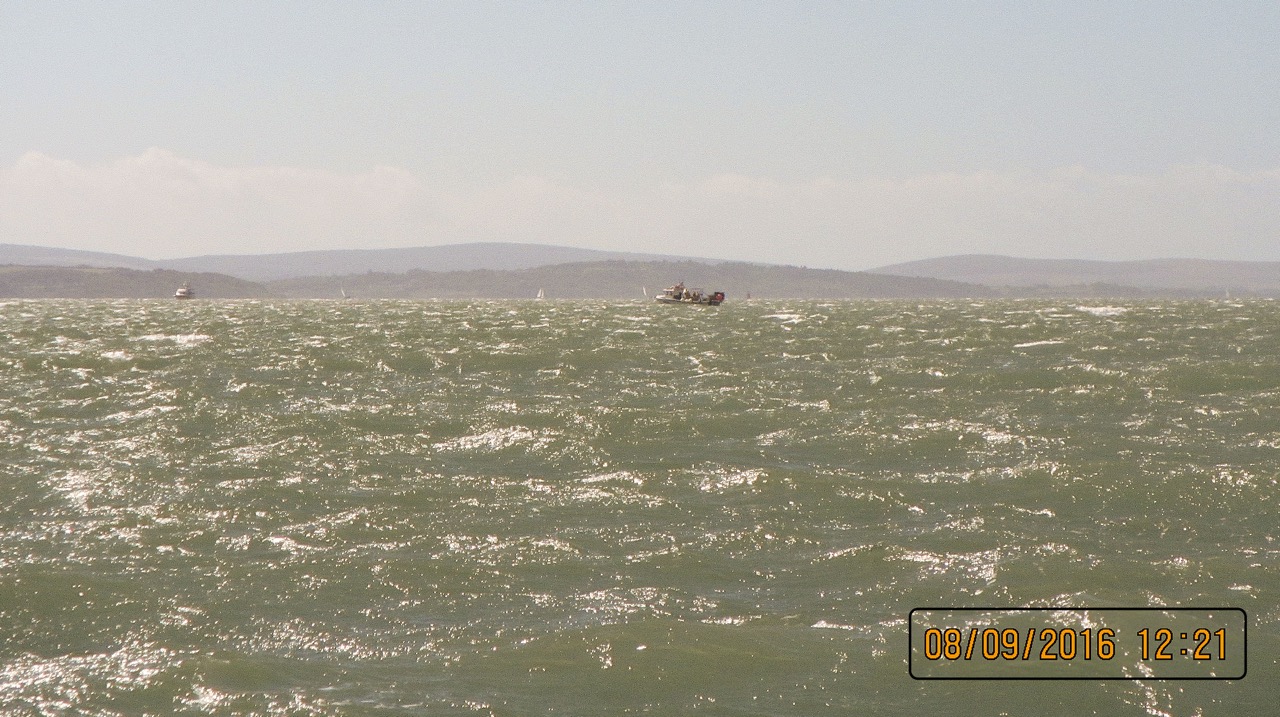 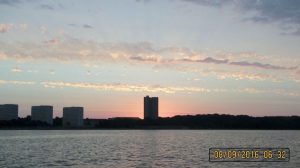 I was in two minds whether to sail on the 8th or the next day (Friday). The later in the week the better the tide times but a depression approaching the NW on Friday evening suggested deteriorating weather that day and on Saturday. On the other hand, having got up early on the Thursday the latest chart looked very windy although xcweather only had force 4 to 5. The last time I kept waiting for a better day I didn’t get out at all so I decided to go today on the Thursday despite the 0520 forecast again suggesting windy weather; left at 0540.

There were puffs of wind as I motored down the Itchen and given the forecast, I decided to only set mizzen and jib to sail down Southampton Water, and furled the mizzen after the Itchen Bridge. However once over Weston Shelf at around 0625 when I tried sailing the wind was too light. I decided to motor while having breakfast, just leaving the mizzen set.

Around 0700 I was nearing After Barn and decided to set the main with one reef. Almost immediately after the wind increased and I furled the mizzen. However there were starting to be some strong gusts and having passed the Hamble Oil Jetty I put in a second reef. By around 0720 I was crossing the ship channel but the wind direction was stopping me pointing as high as I’d prefer so, since there was a cargo ship outbound, I tacked back towards the Esso jetties to get out of the way. Passing Calshot at about 0740 the flags were out on the Tower, Seatern was in the various wind shadows from the Hangars etc. but I didn’t make a radio call, rather concentrated on spotting wind gusts! Once past Calshot Spit (the centre board touched bottom at one spot) I hardened up. I was now actively sailing Seatern with the wash boards in place and, having started to have to spill wind quite a bit, decided to reduce to jib and mizzen.

As I dropped the main the boom detached from the mast so some of the sail sliders and a section of sail were no longer attached to the track. The drop-nose pin had fallen out – perhaps I had not properly “locked” it after going under Northam Bridge in the dark. I clipped on and went on the cabin roof to insert the sail slides in the detached bit of track manually as the sail came down. Meanwhile Seatern was sailing a bit off the wind towards Egypt Point and Gurnard. I tried to reattach the boom but failed so left it supported by the main halyard at the tack end, unfurled the mizzen, and tacked back towards the mainland with the idea of getting calmer water. The chartplotter suggested that the flood should be about to start (so the wind would no longer be against the current) and Seatern’s track plot suggested it had started already! 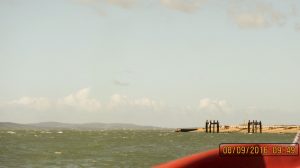 I headed into reasonably shallow water near Stansore Point just east of the no-anchor zone and at about 0855 put out the anchor in about 6m of water. By 0920 I had the “anchored” shape up, had (miraculously) found the drop nose pin, and had the boom reattached. With the flood setting in there was little point trying to beat west; on the other hand if I ran east in no time I’d be in the eastern Solent and would then have to close reach back against the current! I decided to stay anchored and see what the wind did. 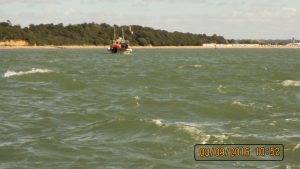 At 1035 the anchor alarm sounded and Seatern was dragging quite rapidly. I let out more rode and tried pulling up the centre board and fixing the rudder centrally in the hope she would sit better. The anchor held again but I was now nearer to a fishing float than I would normally have anchored. There were now many white horses! Then at about 1045 I was alarmed to see a fishing boat heading straight toward Seatern. They came alongside and said I was anchored over their string of pots and immediately – without waiting for me to start a motor or otherwise prepare – hauled their pots along with my anchor! Fortunately Dai started on first pull and I was able to reverse away from their stern. Rather than re-anchor I decided to motor into Beaulieu River and have lunch in the shelter of Gull Island. With the wind and current against us, for once I had to use a good fraction of Dai’s 6hp. The electric Torqeedo would have been useless. 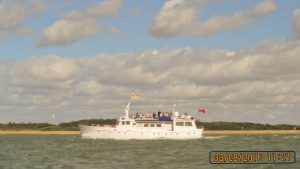 Going into the river the charter boat Seafin passed also heading for more sheltered waters! However there looked to be a lot of boats already in the anchorage area and given the strength of the wind, I didn’t feel confident to anchor amongst them so turned and headed back out of the river. In retrospect I think some of those yachts were actually coming down the river out of Beaulieu. Once far enough out to clear Lepe Spit I unfurled the jib and proceeded back under that sail alone. 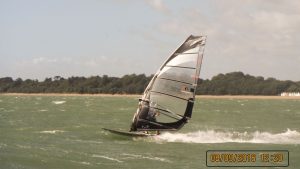 By now (midday on) it was very windy. Bramble Met Post data (see above) suggests lower force 6 gusting mid force 6. Calshot Light Float had mid force 6 gusting well into force 7. That it might be gustier at Calshot Spit is in line with the wind coming more off the land there. Compared to other times I’ve been out I think a good force 6 with force 7 gusts seems a better description. I got a good photo of a wind surfer out near the light float before rounding the point and after the ferries and a clear channel ship passed crossing to the Hamble side. There I got trapped ahead and upwind of a larger yacht going at a similar speed. Wanting to get further from the ship channel I dropped back and crossed behind – but it was then noticeable that I no longer kept pace. I suspect the flood current is greater in the ship channel.

Back at the jetty 1446 on the second attempt to come in – Seatern was being blown along at well over a knot with Dai in neutral. A shorter trip than I’d hoped but interesting to experience what seemed the strongest winds I’ve met with yet. [27.3nm]