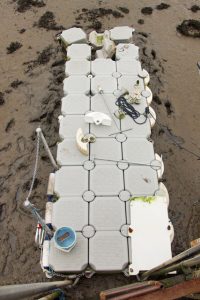 In trying to turn Seatern around at the jetty after sailing on the 23rd September she blew around the end of the pontoon. This has happened before and results in her transom hitting one of the rather rusty piles at the next jetty along. By lengthening the jetty by a single double float length I would have room to store my Canadian canoe on the pontoon making it easier to use. It might also make it less likely that Seatern blows around the end. 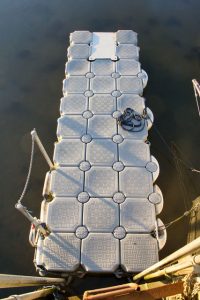 I ordered the extra bits at the Boat Show (resulting in a 15% discount) and picked them up from the Versadock warehouse – which turns out nowadays to be at Setley Vineyard! I then waited for the neap tides on the 6th and 7th before doing the modifications. Because I have a central “gutter” at the end of the pontoon (originally for sliding my Lightning dinghy onto it) I had to insert the new bits part way along which complicated things a bit. At present its all done but needs the fendering and guard chain posts replacing.