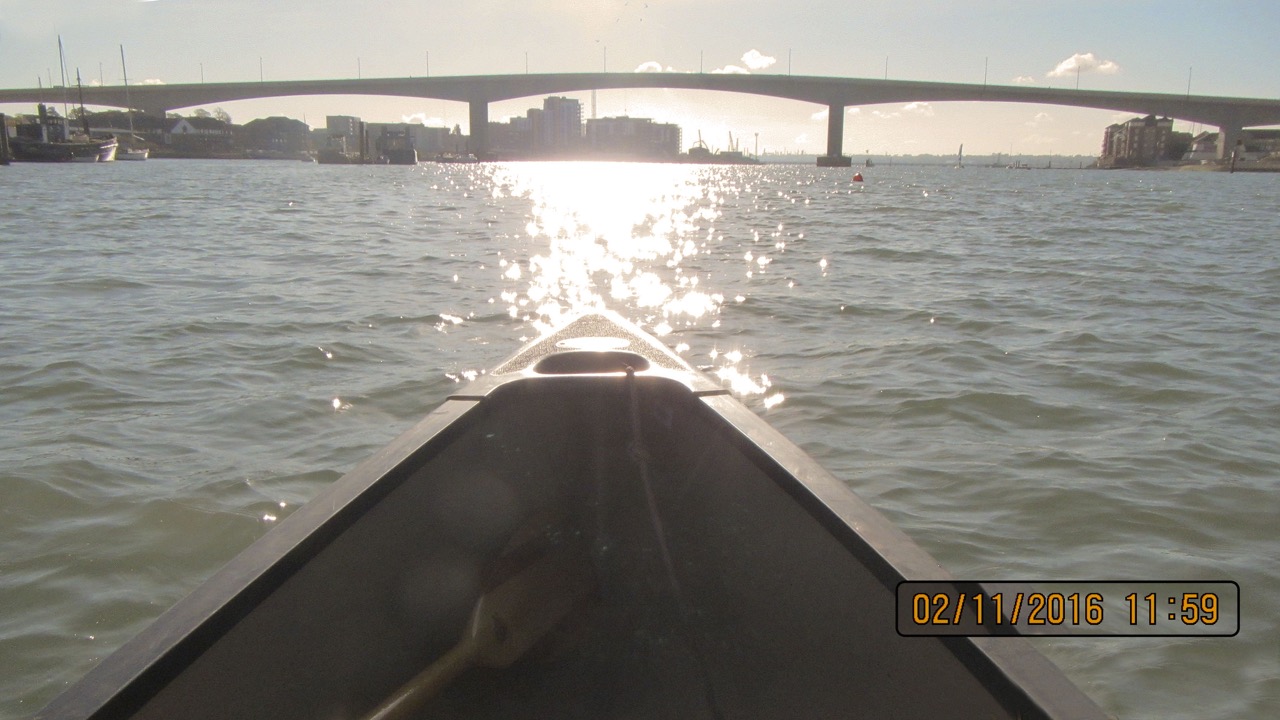 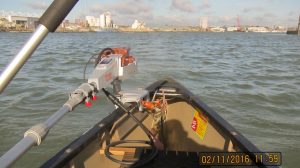 The sun was shining so I decided to take my newly rediscovered canoe, “SeaOsprey”, down river to Ocean Village marina. Earlier in the morning I’d taken the propeller off the Torqeedo to discover that the split pin and thrust washer had been left well greased and in good condition. I added more grease and reassembled it. I also attached the tiller extension (originally on Seatern but replaced there by a better one) to the tiller lengthener that I’m using on the Torqeedo tiller – you can see the lengthener and a bit of the extension in the photo. 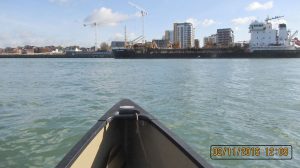 SeaOsprey was afloat by about 10am and I left about 1030. Going down river I kept her at 3 to 4 kts (about 150W) so the ebb would not be too strong by the time I was returning. Having gone under Itchen Bridge the Sand Heron dredger passed going up river to the ballast quays, while two Itchen Marine vessels passed outbound. They all look bigger from a canoe than from Seatern! Ocean Village Marina seemed a suitable destination. I haven’t been in there for some time since there seems no point in risking going into the marina with Seatern. However with the outboard on the canoe I can manoeuvre fairly easily even in fairly tight spaces. “Fairly easily” because it steers like a shopping trolley! 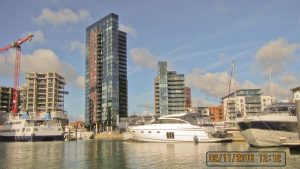 I was amazed at what the marina looks like now. It used to be a fairly normal looking marina with the normal assortment of boats. Now the low rise “Canute Pavilion” has been replaced with high rise apartment blocks and the boats have entered the tupperware/gin-palace realm! What’s more there’s much more development going on onshore. The photo album gives an idea. 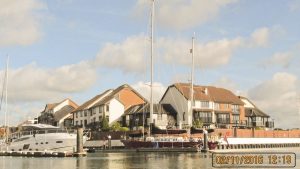 It’s all a big contrast to the original ocean village development with the Ocean Youth Trust ketch John Laing moored in front. A similarly large development is taking shape across the river at the old Vosper-Thorneycroft site on the Woolston side. I went past that as I began to return up river. The wind had got up now and it was cold. I tried to put another layer on while underway but the canoe is so light it needs constant steering adjustments else it gets blown by the wind. Paddling it single handed is really difficult unless there is some extra ballast in the canoe. In the end I had to let SeaOsprey drift back a little way while struggling into an anorak. Got back to the jetty about 1245 and stopped there rather than go up to Woodmill, it was too cold in the wind! The trip must have been about 4.5nm and used about 40% of the Torqeedo battery.