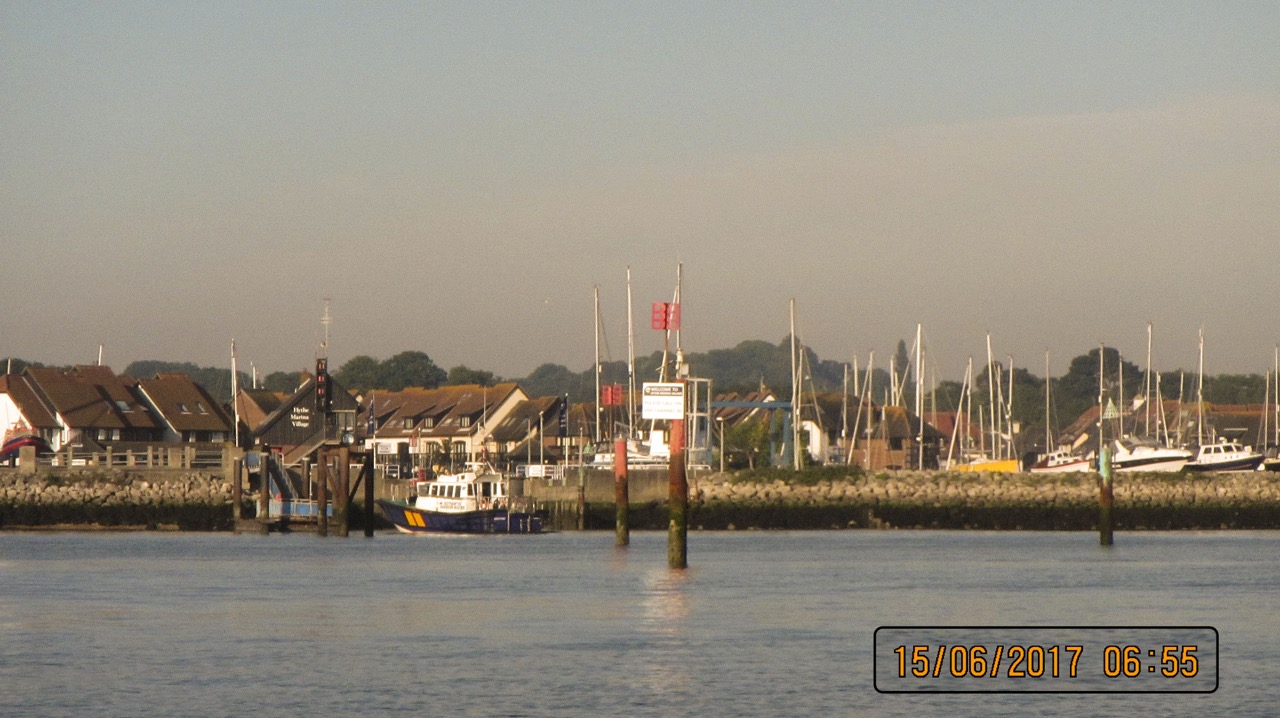 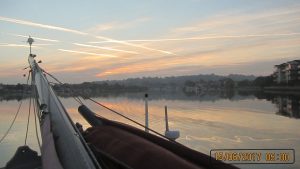 Left at 0500. As I was detaching the boom a shackle pin fell onto the deck. Once the mast was down I checked all the shackles I could see and they looked OK; most are seized using cable ties and I replace the ties on the important shackles each year to guard against UV. Mystery as to where the pin came from! 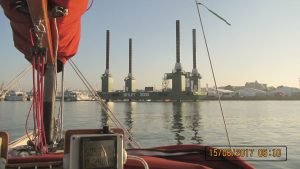 Passing Shamrock Quay marina I noticed an interesting looking motor yacht, the Tahilla; it turns out she is an historic vessel being one of the “Dunkirk Little Ships” of WWII. My plan was to first motor round to the Seawork Exhibition to see it from the water before raising sail. However nearing Dock Head a car transporter was coming into dock so I couldn’t cut the corner but had to fall in behind her and let one of the Red Funnel ferries come past before I could go around her. I’d gone for another look at the huge Skylift 3000 but also noticed a “Wave Craft Surface Effect vessel” used for servicing wind farms. Wish I’d gone onboard that when at the show! 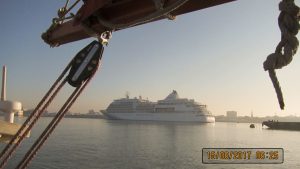 I was viewing the Seawork pontoons near the dockside when I heard VTS say the the Silversea cruise ship at Dock Head was inbound for 101 – which was where I was! I motored somewhat rapidly to the Hythe side and, with the wind very light, hoisted sail to part drift, part sail down Southampton Water. I rarely use the Hythe side or see it from close to. SP (Harbour Master’s launch) was backing out of Hythe marina, presumably having refuelled there. 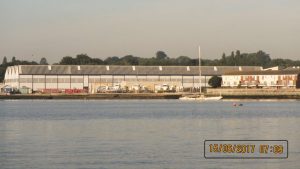 Beyond the pier and the village waterfront there is the Hythe industrial park, now home to Solent Refit amongst others, but once where BOAC maintained their flying boats, and later as RAF Hythe, the last US Army base in the UK. It also saw the development of the hovercraft and three remain there although Griffon Hoverwork have moved to the River Itchen. 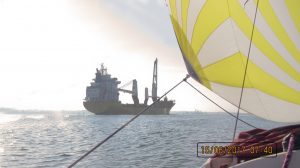 Having had breakfast, and with a little more wind, I set the asymmetric. There was not enough wind to fill it during the hoist with the result that the control lines got wrapped around it and I had to go forward and sort it out. Merchant ships passed in either direction and, as I neared the Esso jetties, a “Clear Channel” container ship was outbound. There is a big wind shadow behind the tankers at the Esso jetties so I decided to motor past them but “Dai” would not start, I think I flooded him!
I dropped the asymm and turned upstream, fortunately there was enough wind to stem the current. SP slowed to look at me but I luffed up to show my intentions and he continued on. Ships over 150m get a “Moving Prohibited Zone” around them in the “Precautionary area” of the shipping channel; ships over 220m are “Clear Channel” and no other vessels may enter the Precautionary area ahead of them to cause any impediment. Thus the ferries, including the Red Jets, are often well outside the shipping channel when there is a Clear Channel vessel around. 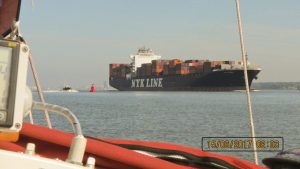 Once the NYK Rigel (length 294m) had passed I reset the asymmetric and headed back towards the Esso jetties. However the wind was very light and, at a second attempt, I got Dai started and motor sailed past them still flying the asymmetric – a new experience! The wind was was now picking up but too far forward for the asymm so I dropped that and unfurled the jib. The luff of the main looked slack but I couldn’t tighten it with the winch – investigation showed that the morning’s loose shackle pin had come from the shackle at the tack of the main sail. I still had all the bits, but with the boom attached to the mast it was a fiddle to get it back together.

Approaching Calshot I radioed the Tower to find the wind at the light float – about 14kts. Once past the spit it was clear that the wind was increasing rapidly. I tried tacking against the flooding tide by keeping in towards the shallows off the spit, putting in a reef on the first tack. However I was not going to get anywhere fast and the current would only increase with time. Not fancying going to Cowes again, I decided to give in and motor round the corner into the Beaulieu River.