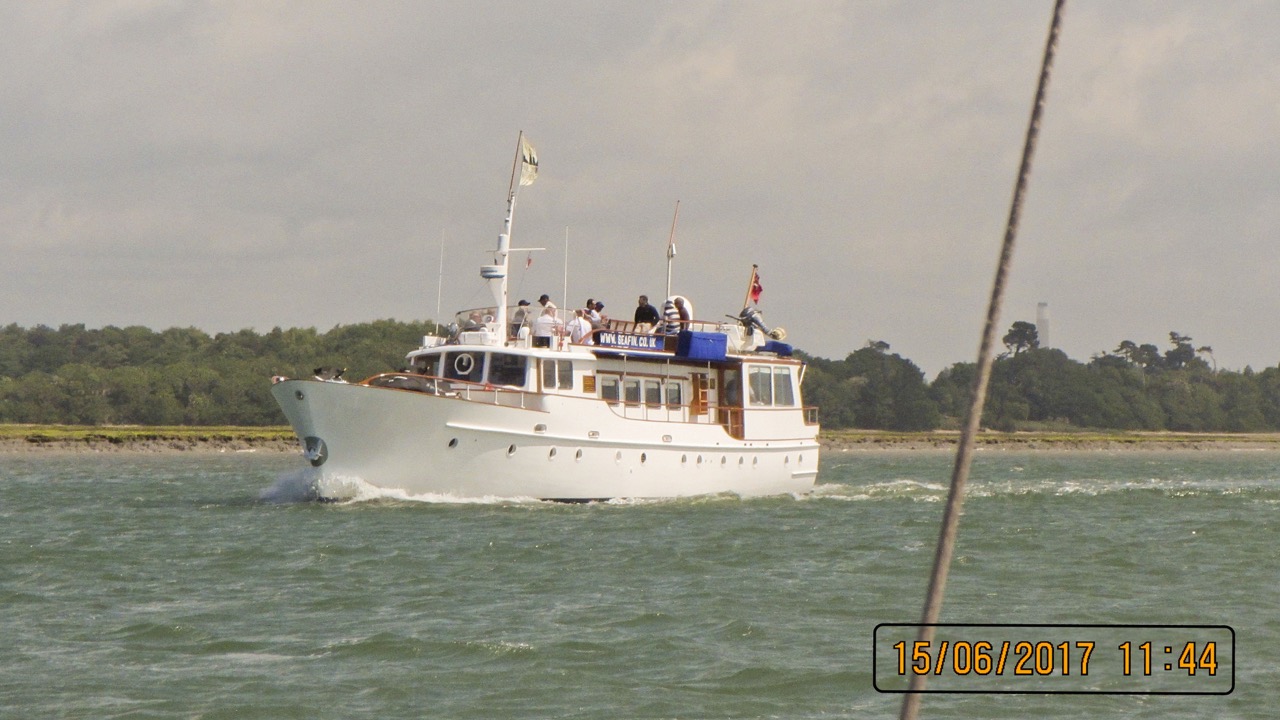 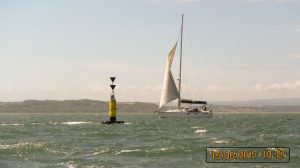 Given that the current and wind were against us, even motoring Seatern was only making a couple of knots (although, admittedly, Dai was nowhere near at full revs). The speed increased to around 4 kts near Lepe Spit, possibly with a back eddy, and increased again once in Beaulieu River which I entered at about 10am. By this time the winds at the Bramble Met Post were mid-force 5 gusting into force 6, and it was another 45 minutes or so before I reached the River proper and gained some shelter from the land. 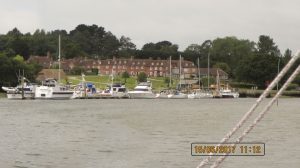 I motored up the river as far as Bucklers Hard but was nervous about going further given the strengthening wind and the number of boats moored in the river. I couldn’t remember how much space there was for turning amongst the moored boats, and I was also beginning to worry, unnecessarily as it turned out, about my timing for the return. 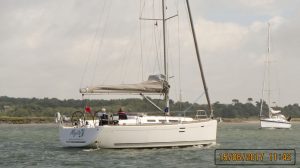 On the way back I was more confident of the amount of water away from the moored boats and took some photos. A couple on a moored yacht who had waved to me on the way up river were now casting off. To my surprise the man on the bow shouted “hello Peter” – I thought I recognised who it was – Nick Peters (Swallow Yachts South Coast representative) – but given the light conditions, and the fact I was concentrating on not running aground, in retrospect I’m not so sure. It certainly wasn’t a Swallow Yacht!* Anyway I followed their rather fine yacht, Mojito, on the way out of the River.

On the way out we were passed by Seafin on her way up to Bucklers Hard. I have chartered Seafin for my 70th birthday celebrations later this year, assuming I live that long! It was reassuring to see how little she was affected by the weather, I hope it will be OK!

Leaving the river I made the mistake of trying to set the mizzen while heading roughly into the wind. Winds at Bramble Met were at this time into force 6. The sail was thrashing around and in the end I bore away, set the jib, and stopped dai. I then realised that, running before the wind, I could set the mizzen much easier! 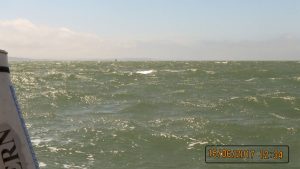 On the way back I took a few photos hoping that one of them would look rough – but it never looks rough in photos. It was a close reach up Southampton Water which Seatern does well under jib and mizzen. The wake of the Esso jetties caused her to heel once or twice, but she was sailing along at 5kts over ground with no problems. I was surprised to see fishing floats both off Netley and, tennis ball size ones, off Weston Shelf. I’ll have to watch for them if motoring out in the early morning. Fishermen do what they like and don’t care about everyone else; if the markers were clearly visible one wouldn’t mind.

I dropped sail and tidied up while Seatern drifted back head to wind off Weston. Got back to the jetty at 1500. [35.4nm].

* I was right afterall! I’ve just returned from the 2017 Swallow Boats Raid and Nick confirmed it was indeed them on their, rather larger, new yacht!