27th Sept: Needles by any means! 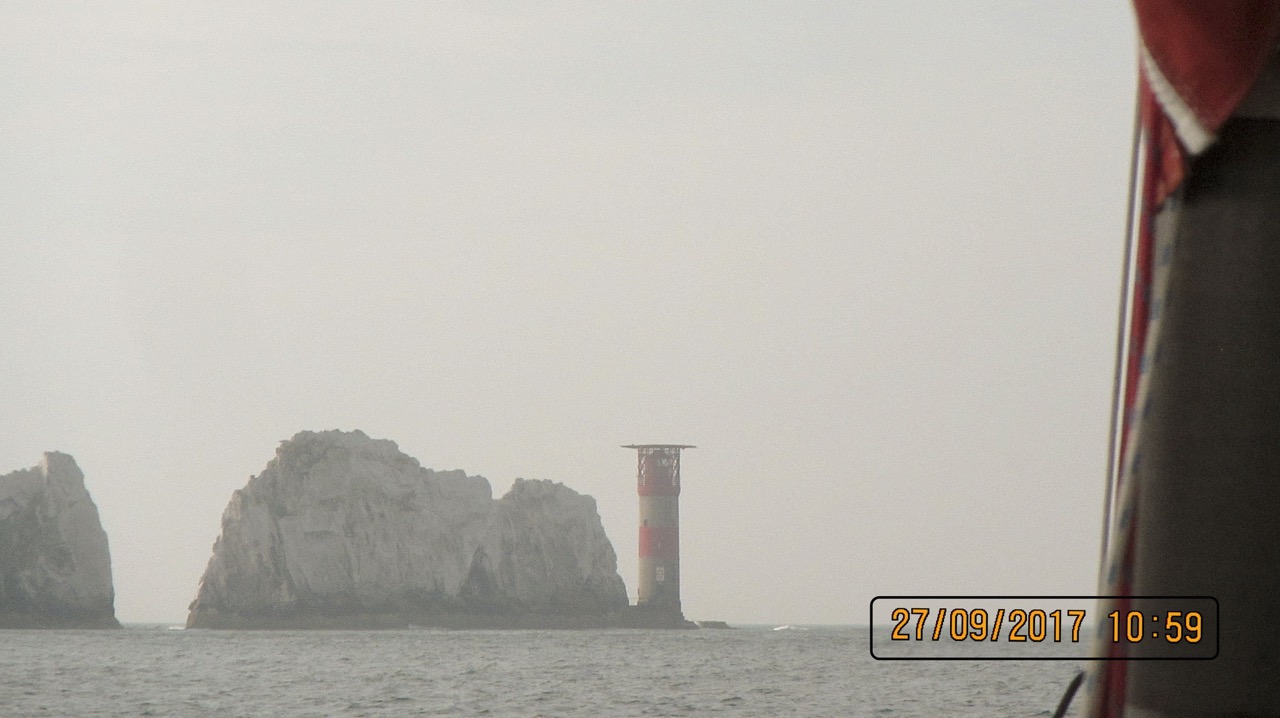 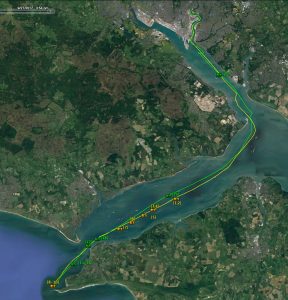 Woke up early (about 3am) and knocked over a glass of water. Then, while getting Seatern ready I stepped on my glasses and had to bend them back into shape and reinsert a lens; began to think it was an inauspicious day for sailing! However I managed to leave by 0455. It was still dark and the yellow buoy marking the position of the broken port-hand pile near the Oil-Spill Response jetty is no longer flashing; fortunately I missed it. It was very dark on Southampton water. A strange cluster of lights which might have been the Fawley refinery turned out to be an MSC cruise ship inbound. It was lit up Christmas tree fashion and it was only as it passed that I manage to pick out the starboard nav light and the 3 vertical reds meaning constrained by depth. Given the darkness I continued to motor down Southampton Water, crossing the shipping channel towards the south end of the Esso jetties because I’d recently seen both inbound and outbound Red-Jets. With a bit more light approaching Calshot I raised the main and mizzen but continued heading into the wind under motor until near Castle Point where I felt safe to bare away and start sailing. 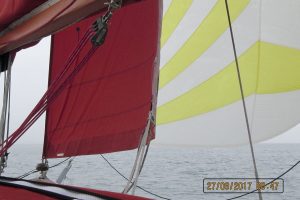 Although light, it was very misty. By 0745 I had had breakfast and, on a broad reach, was wondering about the asymmetric but also anticipating the forecast wind increase. By 0820 the wind had decreased and I had the asymmetric set. The Oil Spill response vessel Earl 2 (based in the Itchen) overtook me heading for the Needles area. By 0845 I was experimenting with both jib and asymmetric. However the wind was still decreasing and the asymmetric was beginning to fall inwards so after 10 minutes I furled the jib. 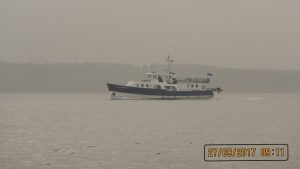 Approaching Yarmouth the Sea Cadets’ Training Ship John Jerwood passed in the opposite direction. I’ve heard the ship on the radio but never identified it before. The Jerwood Trust was formed on the proceeds of Japanese cultured pearls. Given that I’d left the jetty after high tide, the light winds meant that any hope of reaching Hurst Narrows before the tide turned had long gone.

However approaching Sconce Point the wind picked up and Seatern was back at over 4 kts. Given that past the Narrows I’d be harder on the wind, I decided to drop the asymmetric. This soon proved premature since, fighting the tide and with the wind light again, Seaterns speed dropped to 2 kts and below. I decided to start “Dai” (my outboard) to get me through the Narrows but left all the sails set. Once past Fort Albert I hoped that I’d be able to make more way against the current, but each time there seemed more wind and I throttled Dai back, Seatern’s speed would drop. In the end I motored until, at 1100 when I was close to the Needles, I decided to turn for home. 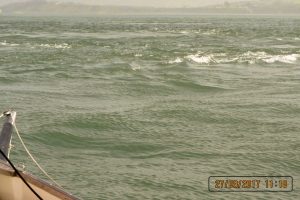 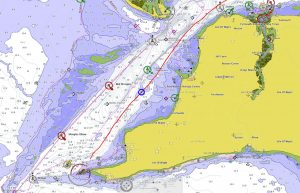 There was no need for Dai heading homeward with the current, Seatern was making 7 kts. Off Totland Bay I was surprised to see breakers ahead. From the chart these seem to be overfalls at a northeastward extension of Tinker Shoal. The depth was still 16m but significantly less than the depths up-current. Given that the winds were light and it was only a 4m tide, the disturbance of the water was impressive. It must be nasty with a spring tide and strong easterly. 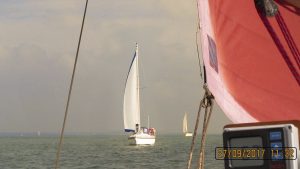 There were now a few yachts around, earlier there had been none. The helm on the first of two yachts coming towards me through the Narrows was shading his eyes to look at Seatern. He shouted “What make is she?” and I think I managed to convey “Swallow“….”Yachts“!

It was a close reach back and, once past Yarmouth and the Wightlink ferries I had lunch. This was somewhat interrupted by a catamaran under main only which was slowly closing towards me from port. It fell in close behind me and I slowly sailed away until they broke out the main and slowly overtook Seatern. 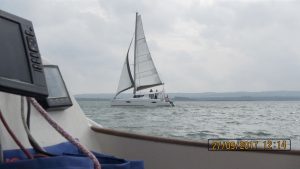 I think some of the crew were under instruction and possibly they were using Seatern as a yardstick. For some time it was close enough for me to have to keep an eye on what it was doing next.

The mist had lifted only a little so when, at Calshot, I saw the inbound Red-Jet go past and with no sign of the outbound service on the AIS I took the opportunity to cross the shipping channel before starting the run down Southampton Water. 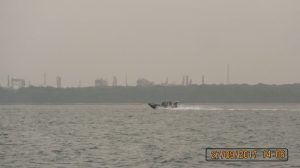 A rib in the gloom

The weather was closing in and, in the gloom, a number of military looking ribs were heading outwards, leaping as they hit the various wakes.  At 1425 I dropped the sails and tidied up off Weston Shore before entering the Itchen. The Alison McGregor was coming out off American Wharf and I steered close enough for JS to recognise me and look out from the wheelhouse door! I was back at the jetty by 1534 and just managed to get Seatern “put to bed” before the onset of heavy rain associated with an approaching front. [46.6nm]