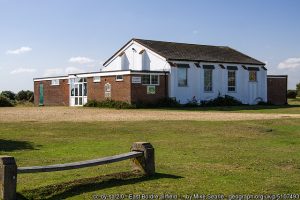 Strong winds caused damage across the New Forest today. East Boldre Village Hall (much of which was a 1st World War airfield Officers Mess) had part of its roof torn off. A sqall line came through Southampton at about 0800 accompanied by thunder and (very briefly) torrential rain. In an email, Nigel Cook asked:

“anyone know what hit Sholing this about 08:00 this  morning? I was talking to someone, lives in Sholing, who was too frightened to go near a window to see what all the noise was about, thinking a plane had crashed. Presumably a tornado, blew or sucked a large section of the roof off and even pulled/blew the rear number plate off his car. I see Peter’s tipping buckets registered about 225mm per hour for the rainfall, any precipitous drop in barometer?”

Both my pressure trace (measured inside my house in Southampton) and that from Peter Brown’s barograph (situated in the north of Southampton) showed similar anomalies around the time of the squall, but no huge drop. However any pressure drop associated with a mini-tornado would be very local. 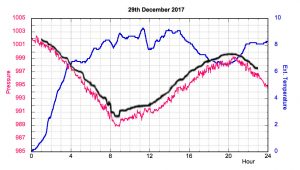 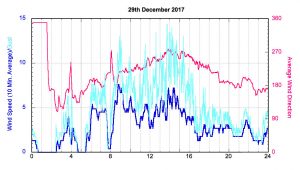 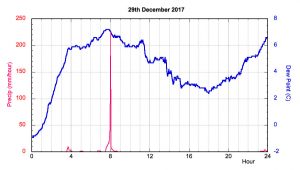