The Environment Agency issued a Flood Alert at 0709 on 3rd January 2018.  The prediction was for a 0.28m surge on top of a 4.86m tide to give 5.14m total with first and second high waters at 1123 and 1342. They suggested that “property protection products could be installed in St Denys as a precaution”. The maximum water level on the midday tide turned out to be about 5.2m (where heights are the Dock Head equivalent referenced to Chart Datum – mCD).  Here are some photos from the 3rd. 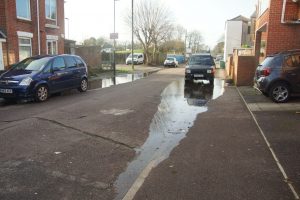 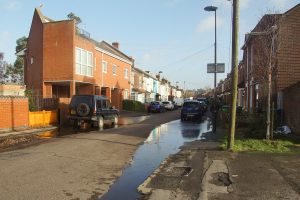 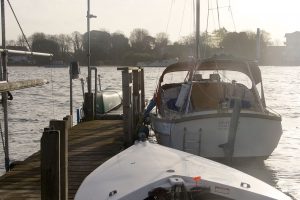 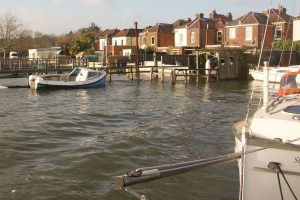 At 1730 on the 3rd the EA issued an update stating that “Tomorrow lunchtime the tide will be similar to the one experienced at lunchtime today” however the predicted levels, a surge of 0.46m on a 4.78m tide, would equate to a slightly higher peak of 5.24m. In the event (using figures from Nigel Cook) VTS peaked at 5.31m at 1205 whilst the EA gauge at Woolston showed 5.258m at 1200 (reading off their graph I get 5.253m). Using the level at Priory Road Hard Nigel estimated 5.40m at 1203 (which is the level which would trigger our local flood plan) whilst the water level in the road only reached 5.23m, presumably indicating a time lag. The following are photos taken by Nigel. 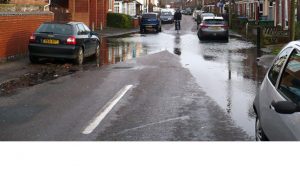 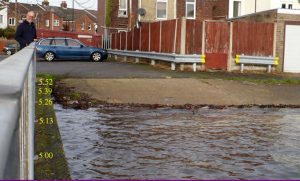 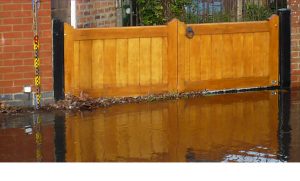 Below are the Met Office analysis chart for noon on the 4th, the NTSLF surge forecast, water height observed at Portsmouth, and the EA gauge graph at Woolston superimposed on graph paper aligned to convert to mCD. 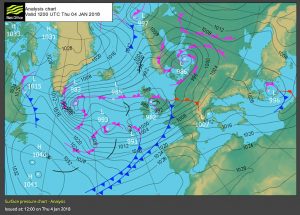