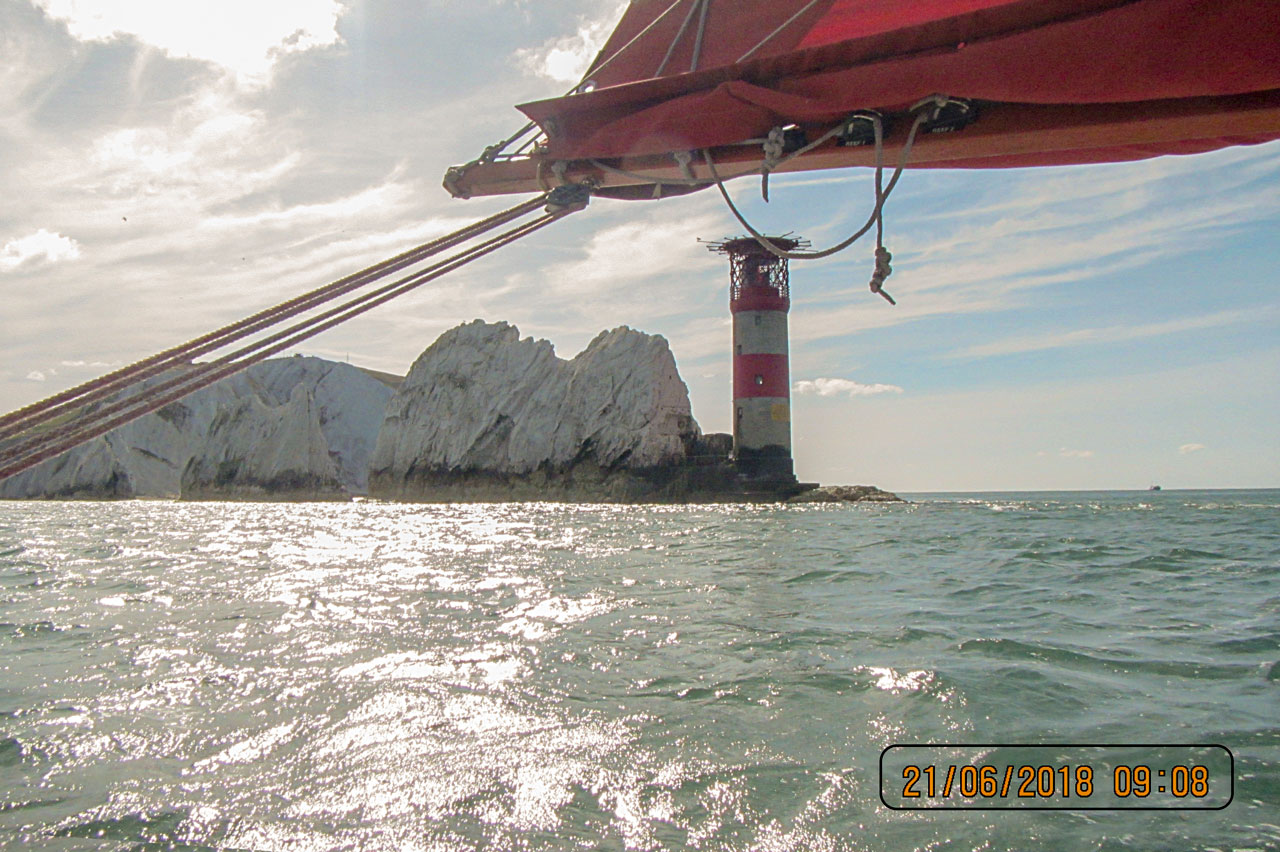 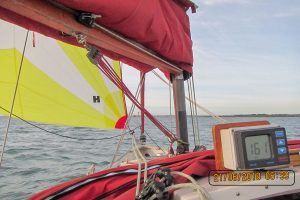 Partly prepared the boat last night by taking out the dehumidifier, lowering the spray hood, and lowering the mizzen. Managed to leave by 0452 and mindful of the “force 6” in the forecast continued to motor up Southampton Water while I had breakfast. At about 0618 and approaching the BP jetty I started sailing with the main, mizzen, and asymmetric set. I used the top down furler to gybe the spinnaker to get around Hamble Spit. The, approaching Hook, I gybed the main but kept the asymmetric goose-winged until a Red Funnel ferry had passed and I could head across the ship channel to Hamble Spit. 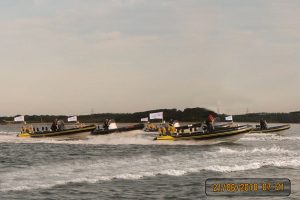 I managed to keep the asymmetric flying until Lepe Spit but the track down towards Hurst was to close to the wind and I swapped to the jib. Several near identical ribs came speeding up from the western Solent as I came opposite the new cafe at Lepe. Flying flags each seemed to have a single driver, I was to see them again twice later with passengers on board.

Despite being close-hauled, with the ebb tide beneath her Seatern was now doing over 6 kt and I went though Hurst Narrows at about 0845 at nearly 10 kt. I thought about taking the north passage but the Needles were too inviting and I continued south of the Shingles. 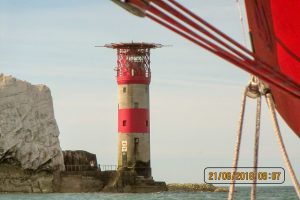 I went closer to the lighthouse than I’ve been before, although the photo makes it seem closer than it really was. I’d decided to head towards the Fairway buoy and then down towards Hengistbury Head before coming back along the shore and back via the north passage. However as I passed the South West Shingles buoy at around 0920 the wind began to freshen and the sea started to look decidedly rough. I kept Seatern close-hauled while putting in a reef with the result that I stayed some distance north of the track to the fairway buoy. As soon as I had one reef in I decided two would be better, and once I had two reefs in I decided to go to jib and mizzen! 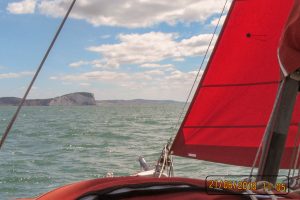 If this was the forecast force 6 I didn’t fancy sailing on towards Hengistbury. A short steep sea had developed and, with only jib and mizzen, Seatern would not go about so at 0956 I “weared ship” to return towards the Needles. Almost as I did so the wind lessened! Seatern was now wallowing in the remaining sea and, although moving through the water, the remains of the ebb tide kept her stationary over the ground. Wary that the wind would increase again, and seeing no point in reaching Hurst with the ebb still running, I kept Seatern “sailing on the spot” under jib and mizzen. Over the next half-hour the speed over the ground gradually increased  to around 2 kt as the ebb slackened. The wind was not increasing so around 1055 I reset the main sail leaving in the two reefs. 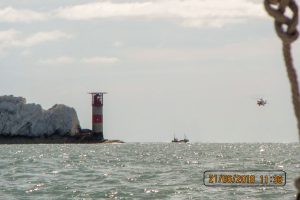 By 1125 I was back at the Bridge Cardinal Mark. There had been few other yachts so I took photos of those who did pass! The Sand Heron had announced on VHF that she was going to be dredging; there was no way I could copy or plot the position she gave but the longitude sounded like it would be somewhere near by and shortly after she motored past. The Coastguard helicopter (“Rescue 175”?) had passed overhead and it now looked to be training by hovering close to, but not over, the Needles lighthouse. Seatern was under-canvassed and around 1148 I shook out the second reef. I was having to tack to get back to Hurst but Seatern’s track over the ground confirmed the flood had now commenced.

Having gone about near Fort Victoria during the starboard tack towards Lymington Seatern was headed and I went about to find that the port tack would now take me straight back along the Solent. This change in wind direction does not correspond with the general trend at Bramble which showed the wind veering from NNW during the morning to N or NNE in the afternoon. However what the Bramble winds do confirm is the changeable wind directions (through ±30°) and even more the changes in strength. During the afternoon the mean wind fluctuated between a low force 3 to just into force 5. This meant I had to sail Seatern on the way back constantly watching the wind direction and, with one reef, feathering and spilling in the stronger periods while being under-canvassed during the lulls. 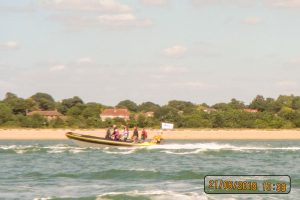 I put in 3 tacks to stay north of the precautionary area before crossing to the Hook Shore near the Calshot CM. On starboard tack towards Southampton Water Seatern’s track shows lots of wiggles and her speed much variation as the wind continued to vary in direction and force. With the prospect of beating all the way back, by 1530 I’d had enough. I furled the sails and started Dai. The fleet of ribs I’d first seen that morning, and again during the tack back up the Solent, now past me going into the Hamble. Each now had a complement of passengers, I managed to photograph one of them.

It still felt windy motoring up Southampton Water, more so than indicated by the Bramble Met winds and those recorded at Dockhead possibly confirm that (although I’m not sure how well exposed the instrument is). By 1718 Seatern was back at the jetty and it felt calm and hot with the houses providing shelter from the northerly wind.(56.9nm)