20th August: to Chewton Bunny and back! 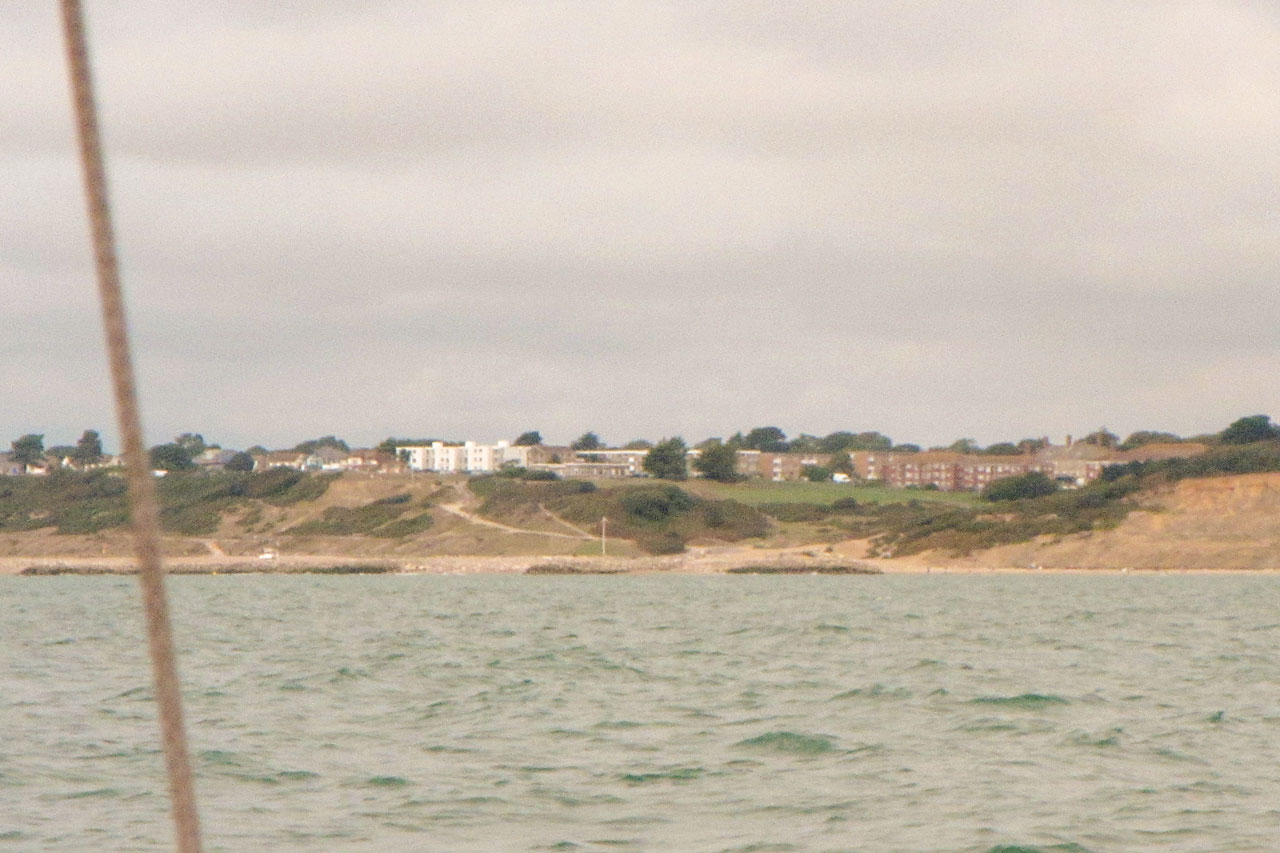 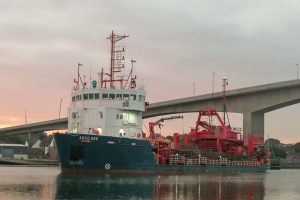 A bad start; getting Seatern ready in the dark I sat on my glasses and had to swap to a spare pair! Still I managed to sneak out at 0530 although the rudder wouldn’t go down properly until Seatern was out in the river channel.

There proved to be a fair bit of shipping activity; met the Arco Dee coming into the River Itchen ballast quays and there was a car carrier, the Thermopylae, berthing at Dock Head. Later, in Southampton Water, Seatern was overtaken by the Blue Ocean, a container ship but minus containers. 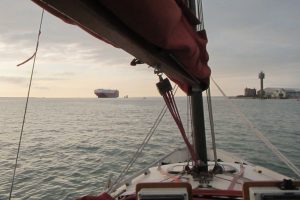 It was still calm so I motored up Southampton Water while having breakfast. Set the mizzen and hoisted the main just before the BP jetty but you could hardly call it motor sailing! I’d seen the ferries pass and there was a car carrier and a cruise ship inbound, so once the Blue Ocean was passed I wanted to cross the shipping channel just past the Esso jetties. The tug Lomax was following the Blue Ocean but I assumed, correctly, she would berth at the jetties so, with a swerve to let SP (the Harbour Master’s launch) go by, I crossed to the Calshot side just past Fawley Deep. 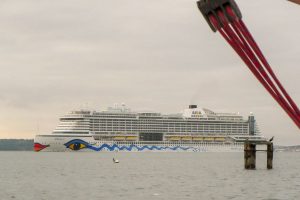 The inbound car carrier was the Horizon Highway and the cruise ship turned out to be the Aida Perla sporting her graffiti – yuk!  I felt my way over the spit at Calshot and, at around 0730, set the jib and thanked the outboard “Dai” for his labours. As I skirted the north side of the Thorn Channel, the research ship RRS James Cook was inbound from the west. 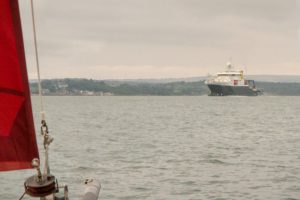 I have to admit that seeing the research ship brought on a nostalgic moment or two. In previous years I might have been on her, or at least on her predecessors, the RRS Charles Darwin or the previous RRS Discovery. On the new ships, the sampling platform, which slopes forward above the bow, was in response to a suggestion from me. It must have proved useful since the newest ship, the “Sir David Attenborough“, also has one. I used to enjoy going to sea, but there was more to working at the Oceanography Centre than sea going and, particularly in the later years when I was in management, some of that was not so enjoyable! 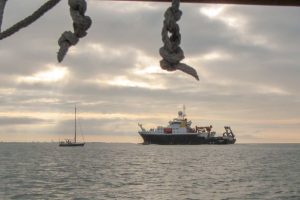 The “Cook” having passed and, by ~0800 at NE Gurnard, I started emptying the ballast tanks. This, with pauses for water to run through from the forward tank, was finished at 0834. But by then the wind was beginning to freshen. By 0900 it was looking decidedly grey and rainy to the west and I decided I should refill the tanks as a precaution. Filling is quicker, since there is a pressure head to make the water run into the forward tank, and it was completed by 0912. As usual going up wind, Seatern was carrying weather helm and at 0922 at the end of the port tack towards Lymington, I furled the mizzen. The Tiller Pilot, which had occasionally been hitting the stops, now looked much happier with the tiller almost central. The wind was increasing and, at 0950 on the tack towards Yarmouth, I put in a reef. On the next tack the drizzle/light rain had started, I’d rigged the door curtain, and I put in a second reef as a precaution before entering Hurst Narrows. 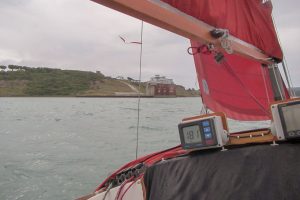 Mindful that last time I’d got too close to Hurst Spit and got into a back eddy, this time I held the starboard tack into Colwell Bay and got into the back eddy there! I should have known since in the past I’ve used that eddy to dodge the end of the ebb. I’d originally thought of landing in Colwell Bay but the drizzle didn’t make the effort seem worth while. 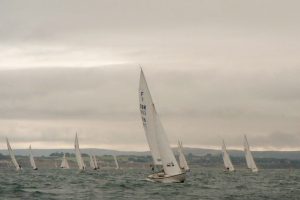 Once down the North Channel there was a large racing fleet coming up behind. They turned out to be Nordic Folkboats; I’ve learnt later that it was Lymington Folkboat Week! I didn’t want to find myself trapped between them and the lee shore so I tacked out, crossing the path of the fleet with Seatern on starboard. When there is a lot of boats sailing in close formation it’s hard to give way to them so I just let them pass fore and aft of Seatern. I’d got my mouth “fog-horn” out in case I had to give 5 blasts but it was clear that they could see me. Once I was among the more scattered boats I did give way and was met with cheery waves and a “thanks!”. 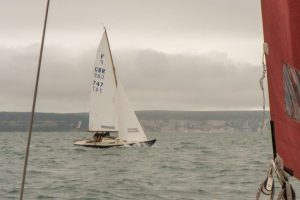 I’d never really looked at a Folkboat closely before. They do look good sea boats although they were pitching a lot and I imagine they are wet. By now the wind had dropped away and with two reefs and no mizzen, Seatern was well under-canvassed so it was not surprising that the Folkboats were going faster, although not that much faster. Of course with light winds, Seatern is a much lighter boat. There were still patches of grey drizzle to the west so I was hesitant in shaking out the reef. However at 1137, as the last FB’s sailed away, I took pity on Seatern and went down to one reef! By 1210 I set the full main sail; the sky was clearing and the wind dropping and backing. 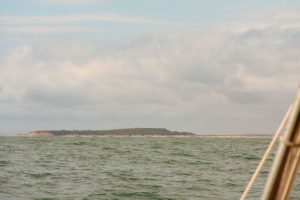 By 1220 I was offshore between Barton and Highcliffe and, with the flood setting in, Seatern was down to 2 kts. I wondered about turning back, then the wind picked up and, with mizzen set, thought instead about going to Hengistbury Head. But the wind died back again. The previous night’s forecast had mentioned “force 2 later” and I didn’t fancy motoring all the way home, so once opposite Chewton Bunny, with a wistful look at Hengistbury Head I turned back. “Bunny” is a local name for a valley (as is “chine”) and Chewton Bunny at Highcliffe is a nature reserve. Back in the 1990’s I used to go body surfing at Beckton Bunny which is eastwards near Barton, but the small headland eventually got washed away and the surf break disappeared with it. 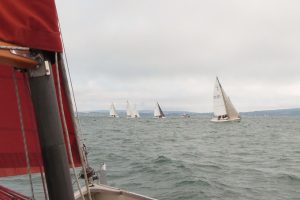 Back towards Hurst there was a fleet of J80’s racing round the buoys in Christchurch Bay. Presumably to avoid them, a larger yacht which had been upwind of me made a large detour towards the coast. I didn’t want to be pushed leeward and shoreward so remained on track to pass through them. The contrast in behaviour to the FB’s was marked. As far as the J80’s were concerned, Seatern, on starboard, was not there. When I gave way to go around one J80’s stern the crew did not even look at me. Years ago, I gave up dinghy racing because I thought it all too serious, and I think things have got worse with time. 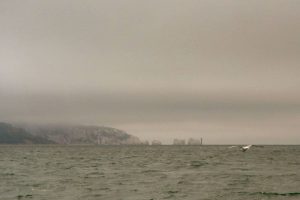 The wind had backed to the extent that it was a very close reach up the North Channel. The FB fleet, returning with spinnakers set were in the Needles Channel – supposedly! Some looked to be well over the Shingles bank. I know a lot of the boats are based in Lymington or Yarmouth so they have local knowledge, it was a very neap tide, and the tide was rising; but I wouldn’t fancy going over the Shingles near low water on an unsettled sort of day. If there were a squall it could get very rough there! 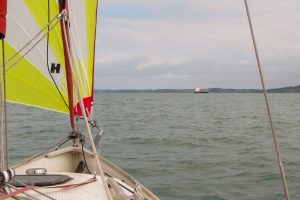 It was a bit choppy through Hurst Narrows, which passed by at 8 kts, and I waited till beyond Yarmouth before rigging the asymmetric. I tangled the sheets, so I got it set on the second attempt! It was a starboard tack broad reach up the western Solent helped by the flood tide; however the wind was slowly veering so I ended up on a track towards Gurnard. A larger yacht with a masthead blue spinnaker was inshore of Seatern and, aided by the better current and wind offshore, Seatern was leaving them well behind. 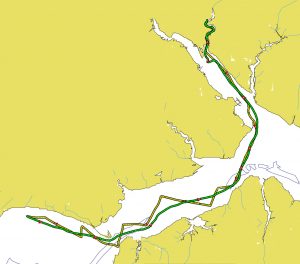 At 7kts in the current off Gurnard I decided to gybe and forgot to tighten the spinnaker halyard. The spinnaker got wrapped up with the forestay and in a horrible mess. I ran on port tack under main and mizzen with the Tiller Pilot steering while I got the sail down and packed it away. Meanwhile the blue spinnaker yacht passed well ahead, also bound towards Southampton Water. Off Calshot Spit I finally was able to set the jib and harden up a little to cross the shipping lane. Off to starboard I saw the blue spinnaker yacht going round in circles while they fought to snuff their spinnaker and once again Seatern was ahead of them – it was obviously a “bad spinnaker day” for them too! 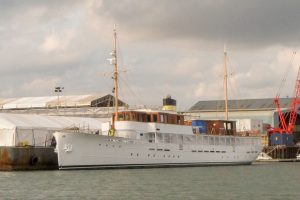 Going up Southampton water the broad reach turned into a close reach as the wind continued to veer. I got the sails down off Woolston and lowered the mast before the Itchen Bridge, it makes dealing with the unpredictable traffic on the river so much less fretful! On the way out I’d seen a fine looking motor yacht being refitted at Dibbles Wharf (I think) and on the way back I went close in to view it. One of the shipwrights working on her waved to me and I saw it was Richard, a friend. I was taking my time heading back being early for the tide, but coming in towards the jetty I saw there was enough water to dock and was moored up by 1807. [56.5nm]