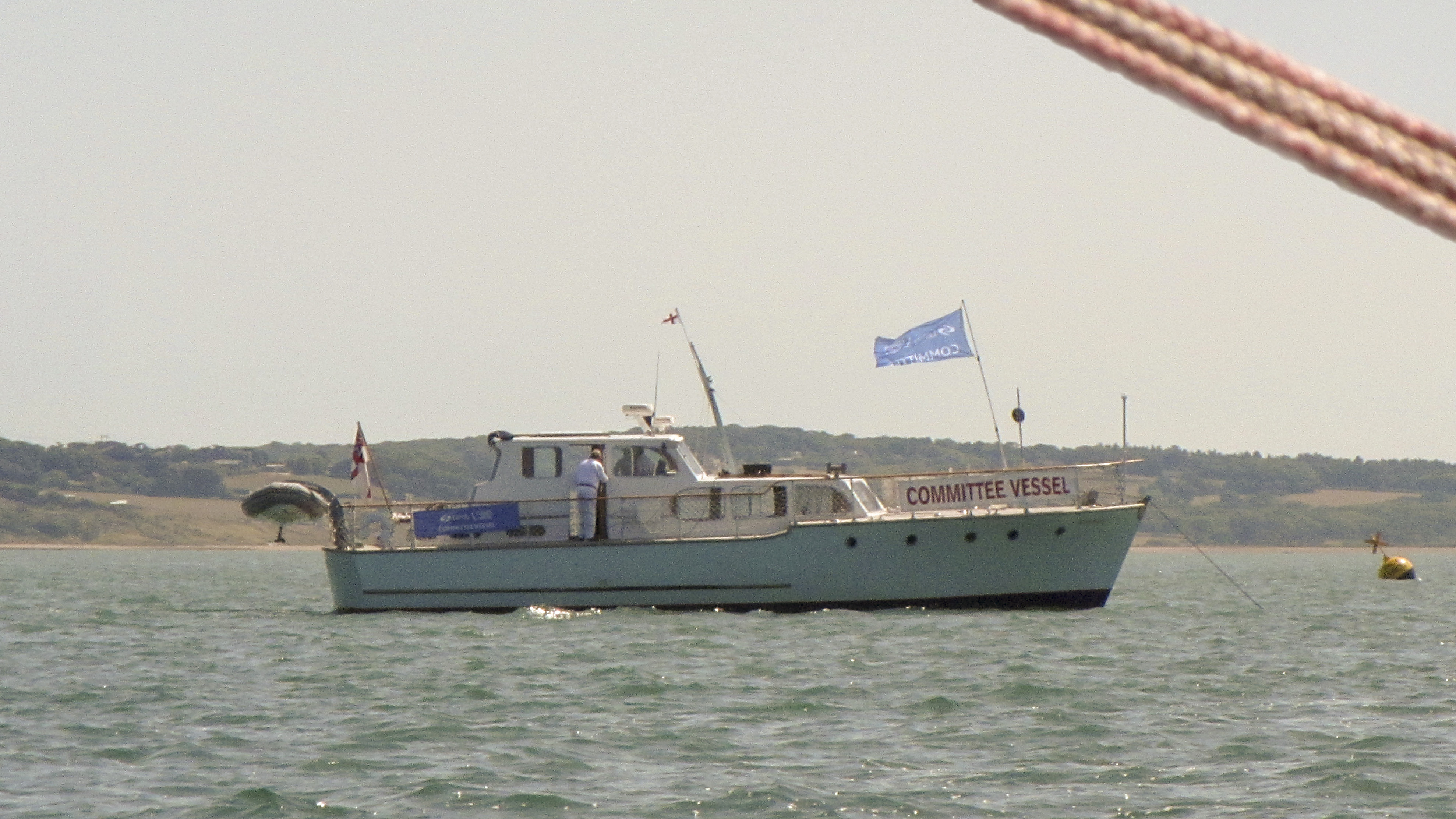 I put off sailing last week because easterlies were promised for this week and, despite it being Cowes Week and therefore hectic, the tide times were good. I was up early and left the jetty by 0510 only to remember I hadn’t started to lower the mast! However there is plenty of time before reaching Northam Bridge. 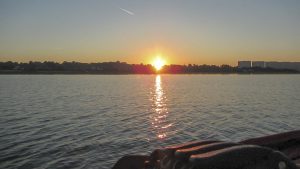 There was hardly any wind so I continued motoring up Southampton Water having breakfast as the sun came up over Weston Shore. I set the main near Hamble CM but continued motoring; two ARC car transporters were inbound, Freedom and Patriot! Once they were passed I crossed the shipping channel to Ower Lake just south of the Esso jetties and, at 0700, started to pump out the ballast tanks. 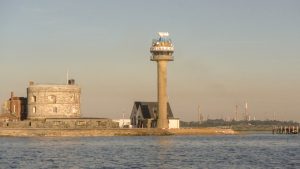 At 0707, as soon as I dared, I bore away over Calshot Spit with the asymmetric set (after untangling the sheets). By 0730 I declared the ballast tanks empty and realised I had forgotten to set the mizzen! The wind was very patchy, at 0735 with mizzen set we were starting to be becalmed, and by 0746 it was clear that what wind there was going to be too much on the bow and I furled the asymmetric and set the jib. Four minutes later Seatern was totally becalmed – but still drifting westward at 1.8 kts on the ebbing tide.

The next three hours were spent close hauled on Starboard tack sailing and drifting down the western Solent. The wind remained patchy and at times Seatern had no steerage way. The Raymarine Tiller Pilot (“Ray”) panics when that happens, putting the helm hard over, and beeping frantically!  Instead of using Ray, I locked the Davis tiller tamer at a slight weather helm and then played the mizzen to keep Seatern pointing in the right direction ready for the next puff of wind. This worked very well. 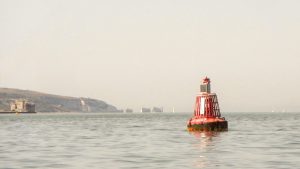 At around 0900, approaching the entrance to Newtown River, I learnt over the VHF that the racing at Cowes was postponed until 1200 due to lack of wind. It was beautifully quiet, there were hardly any other yachts out on the water, and of the few there were, I seemed to be the only one “sailing”. 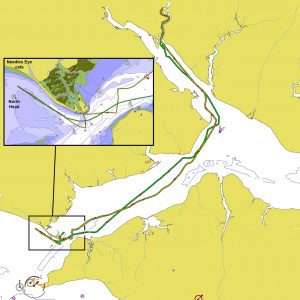 Track plot for the day with (inset) the detailed track at Hurst and into the North Channel.

Beyond Yarmouth Seatern was getting progressively headed and I felt I was getting pushed out of the main current. I tacked back across towards Sconce Point and on the next tack thought I could just manage to squeeze along the shore beneath Hurst Castle into the North Channel.

I was wrong! There is certainly plenty of depth close into the shore but there is (perhaps not surprisingly) a back eddy! Seatern speed dropped to half a knot and it was clear that I’d slowly be pushed ashore. The effect of the current is obvious on the chart (see inset). I had to tack away from the well named “Trap” before being able to tack into the North Channel. 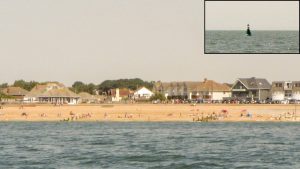 The tide was due to turn at about noon and the current was against Seatern so I decided to sail as far as the North Head buoy and, ashore, the Needles Eye Cafe (which I recommend!) before, at 1208, turning back towards Southampton.

Whereas I’d been making 2 to 3kts going out, Seatern sailed back towards Hurst on the increasing flood tide at 5 to 6kts. Given that the wind was more or less with the tide I was surprised to see white water at The Trap. However I have read that the roughest conditions at Hurst can be at the start of the flood. Possibly the current direction does not change uniformly throughout the substantial water depth. 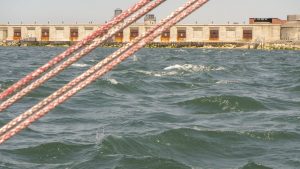 The choppy water continued through the narrows and I waited until flatter water before setting the asymmetric, initially on starboard tack. Soon after passing Yarmouth the proximity of Bouldnor Cliff forced me to gybe onto port tack which, aided by the flood current, took Seatern all the way to Lepe.

Off Beaulieu Spit I passed a Royal Yacht Squadron Committee Boat and I’d heard on the VHF that racing was starting around 1400. I gybed away from Lepe Spit, with the bottom in rather too plain a view. Large racing yachts were ahead and, gybing back onto port I left the asymmetric and jib furled to provide a clearer view. That risked them assuming I was motoring rather than sailing – but racing yachts tend to assume you will give way to them anyway! 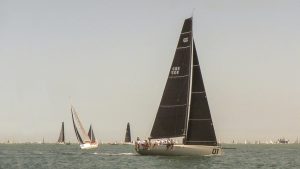 I seemed to be amongst some of the larger, faster racing classes – for example the Fast 40+ which has a crew of up to 11 (5 can be professional) and is capable of 20 kts. Fortunately the wind was too light for them to be planing! How people can spend so much money on a boat designed purely for racing beats me! 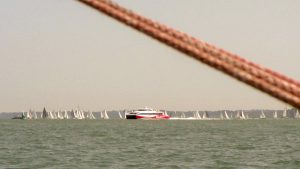 Fortunately most of the racing was off my route!

By about 1420 I was past the nearby racing fleets and reset the asymmetric to continue the port tack in towards Calshot Spit. There I had to gybe again for deeper water (again with the bottom clearly visible) and a further gybe back onto port to cross the shipping channel. On all these gybes I used the top-down furler rather than gybing the asymmetric while it was set – it really makes gybing single handed so much easier.

Hardening up into Southampton Water the asymmetric was really pulling and in the gusts Seatern was singing along at over 6 kts with probably a knot or less being due to the current. I thought of calling Calshot NCI on channel 65 but, conscious that the ballast tanks were still empty, I had my hands full both steering and working the asymmetric. By 1535, off Netley, it was getting too exciting and I furled the asymmetric and started refilling the ballast tanks. I continued under main, jib, and mizzen until around 1550. 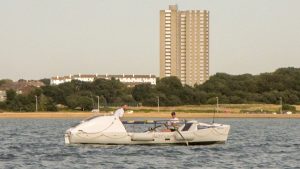 Being almost an hour early on the tide, I started Dai (my outboard) and commenced a leisurely sort out of the sails – lowering and packing away the asymmetric and the main,  furling the mizzen and the jib. For the first time ever I even lowered the two masts before entering the Itchen. While I was doing this I was keeping an eye on a cross -ocean rowing boat, the Atlantic Albatross, which was training near by. When I took a photo the woman rowing shouted something, I hope I had not impeded their practice, I’d been prepared to motor out of the way. Anyway I’ve given them a donation! 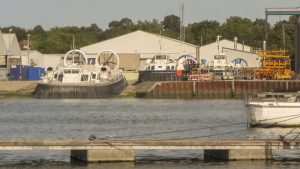 People seem surprised when I tell them that hovercraft are being built on the Itchen so I took a photo. Further up river I met a SeaStart rib coming the other way. I’m a member but they don’t salute you like the RAC patrols once did! There are some impressive yachts being refitted at Saxon Wharf while across at Quayside Marina there is the old Hythe Ferry Hotspur IV back afloat and another ferry I don’t recognise.

I was back at the jetty just before 1730. Like all the recent days it had been very hot and continuously sunny and as soon as I had Seatern moored and sorted I was swimming in the river. [46.2nm]