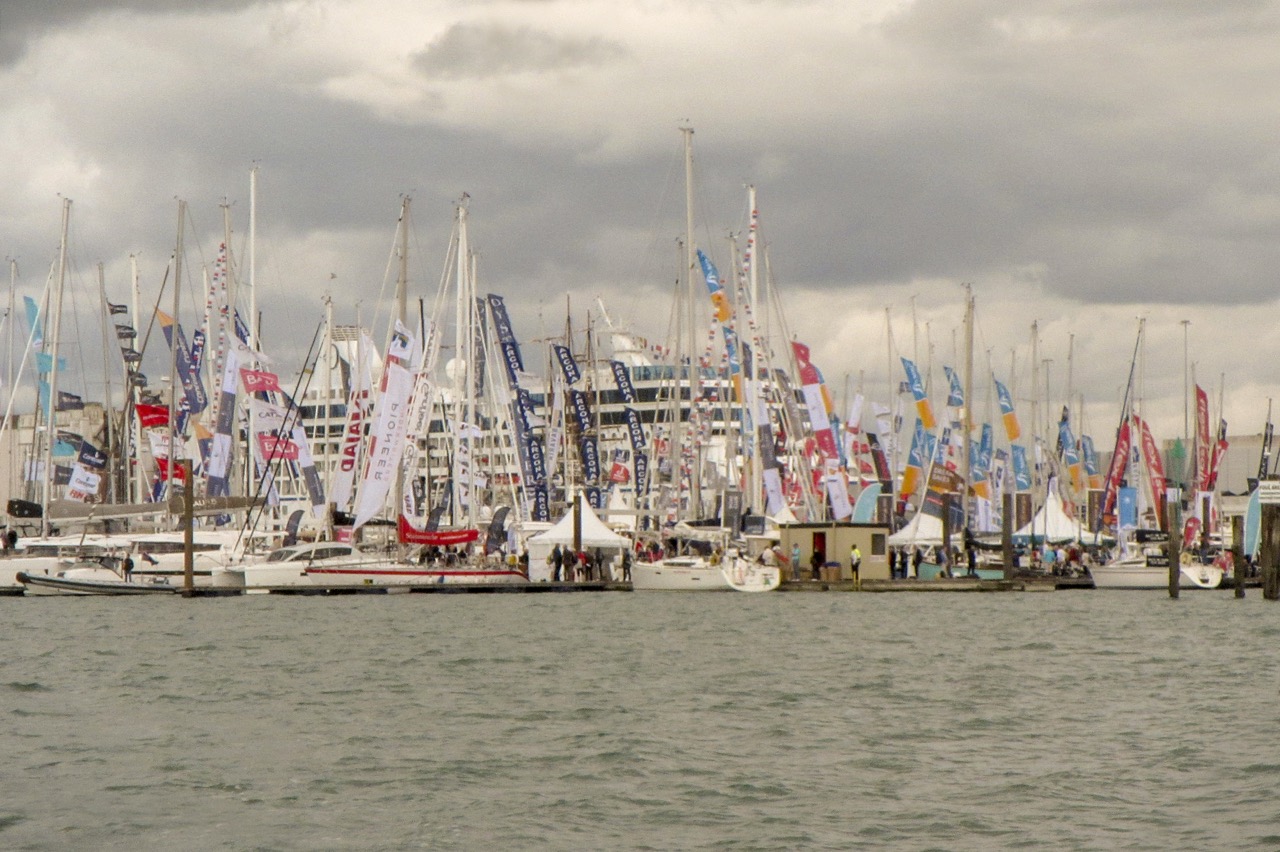 The first day of the Boat Show! I usually try to “visit” it from the water side, however I’m in the Calshot Tower NCI Station on the 15th, and on the NCI stand at the Boat Show on the 16th, and next week is looking windy, so I decided to go there on the first Friday. It implied setting out towards the end of the morning tide window and I managed to get away by just after 0500. With a new moon it was very dark so once again I only raised the mast after going under Northam Bridge and left re-attaching the boom until Seatern was in Southampton Water and clear of the second “yellow-cross” pile on the Weston Shelf. A procession of liners were inbound, including the Queen Elizabeth and the Braemar, but it was too dark for photographs. 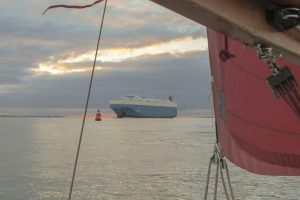 By 0615, I’d had breakfast, and approaching the BP jetty had set mizzen, main, and jib. Aided by the current Seatern was still at 5 kts until off Hamble Spit the wind died completely leaving Seatern drifting on the edge of the shipping channel. There was a car carrier inbound in the Thorn Channel so I started Dai (with a struggle, I think he got flooded) and motored across to the Fawley side with the sails still set. Having hugged the depth contour around Calshot Spit I planned to head across towards Cowes. The problem with leaving the jetty after high tide is that by the time I reach the Solent the east going flood current is setting in. With a wind from southwest or west the choice is to sail to the Beaulieu River or go across to Cowes. Tacking against both wind and current wind is futile. However a breeze was setting in and Seatern was managing 4 kts so I decided to stay on a port beat southwestwards and see where I got to! 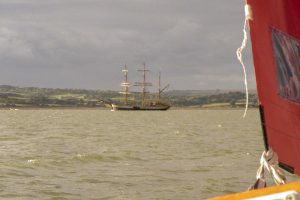 At 0750 I tacked back northwestwards to avoid getting into the stronger currents mid Solent. However there actually seemed to be more current inshore (or possibly just the tide increasing), and 10 minutes later I tacked back towards the SW. A tall ship which had been at anchor in the western Solent turned out to be the Kaskelot which was now inbound to be a feature ship at the Boat Show. The wind was now increasing and the tiller pilot was struggling to cope with the bouts of weather helm. At 0820 I furled the mizzen and soon after started to put in a reef. All went well until I tried to re-tension the halyard. It seemed jammed somewhere but I couldn’t see where. With the main sail eased Seatern was loosing ground on the current. Finally I tacked  and managed to get the sail properly hoisted but by now Seatern was back where she’d been over 30 minutes earlier! 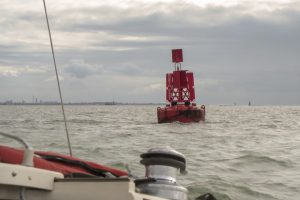 I tried beating southwest again and Seatern was going well through the water. However her course over ground was only a couple of knots in a southerly direction. As long as I didn’t want to go anywhere I was having a good sail! It struck me as the sailing equivalent of going for a run on a treadmill in a gym. Finally, at about 0930 and heading for somewhere between Salt Mead Ledges and Thorness Bay, I decided Seatern had had enough of that exercise and I turned back towards Southampton Water. On a port tack beam reach Seatern was now doing 7.5 kts over the ground! Passing close to NE Gurnard buoy the current was very obvious. By 1000 the winds seemed to have decreased and at 1010 I set the mizzen. However there were still periods of stronger wind and I left the one reef in as a precaution, aware also that I’d be closer on the wind in Southampton Water.

During the whole trip the winds were variable and gusty. The flat calm that Seatern experienced off Hamble Spit at around 0645 does not appear in the winds recorded at Bramble (left) or Dock Head (right). At about 0830 when I was struggling to put in a reef Bramble Met shows a force 5 peak while Dock Head is recording force 2.  At the time I’d estimated the wind to be force 4 since small waves were beginning to break. Later in the day Bramble Met was recording a good force 5 but Dock Head shows the sort of variability I experienced on Seatern with winds varying between the bottom of force 3 to force 5. 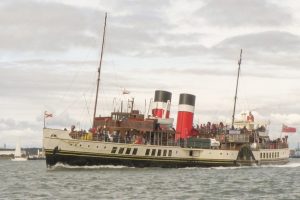 The course over Calshot Spit took me close to the “cricket stumps” dolphin which looks as if it won’t withstand many more gales. I assume it was originally something to do with the RAF flying boat station at Calshot. I thought about sailing in close to Calshot Tower, however the UKD Bluefin and another ship were coming down the North Channel so I crossed to the Hamble side rather than get trapped by them near the Esso jetties. Once in Southampton Water, with the gusty wind and with other boats around, I had to play the mainsheet to allow the tiller pilot to keep control of Seatern and not broach. Indeed on more than one occasion I saw yachts ahead of me go careering up wind as gusts laid them over.  Near Hamble Spit, the Waverley paddle steamer was a fine sight as she steamed out of Southampton. 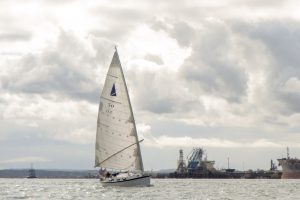 Shortly after the Waverley passed I was over taken by a yacht with a catboat rig and wishbone boom. Looking on the web, I think she must have been a Nonsuch 33. I was impressed at how well she coped with the wind given the large sail (how do they  reef it?) – apparently the hull is very beamy. Off Weston Shelf I again furled the mizzen. With the one reef and no mizzen, Seatern is much better balanced, allowing the tiller pilot to keep control even during the continuing vicious gusts. 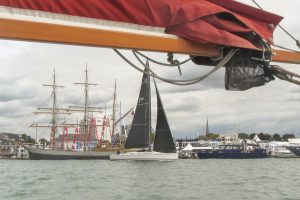 As Seatern approached Weston Shelf a “box carrier”, the NYK Deneb, was outbound and I tacked to the Hythe side. Although it was around 3½ hours before high water the surface current, at least, was flowing outwards. With various traffic about, including the UKD Bluefin now busy dredging west of Dock head. I stayed on the Hythe side of the channel and only headed towards the town side when past most of the Boat Show pontoons. A large Swedish yacht appeared to be giving “sailing experience” trips, and I gave it a wide berth as I tacked to return past the Show pontoons. 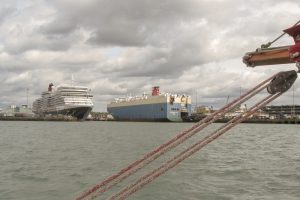 The Galveston Highway, a large car carrier, was inbound possibly for 103 berth and one of the Red Funnel ferries was also approaching so I got out of the way by sailing towards the side of the car carrier leaving the ferry red to red. The cruise ships I’d seen arrive in the early morning were now in port; Oceania Nautica at 101/102, Queen Elizabeth at Ocean Terminal, and the Braemar at the QE II Terminal. Past Dock Head I continued to sail back down Southampton Water while I had lunch before turning back towards Weston Shore where I got the sails down and started to motor back up the Itchen. 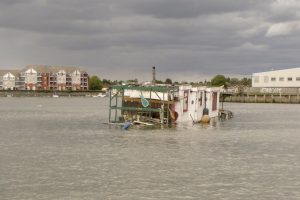 Recently I’ve been lowering the masts down before the Itchen Bridge, today some traffic meant doing it between Itchen Bridge and the green “Chapel” pile and I ended up going east of the moorings. Beyond Northam Bridge one of the larger house boats – a barge with white chalet type accommodation appears to have sunk. Back at the jetty at 1406 and, with the neapish tide, had a struggle to get the rudder up!

[35.6 nm over the ground but more than that through the water!]

[view photo album for the trip]