4th September: the Forts and Bembridge 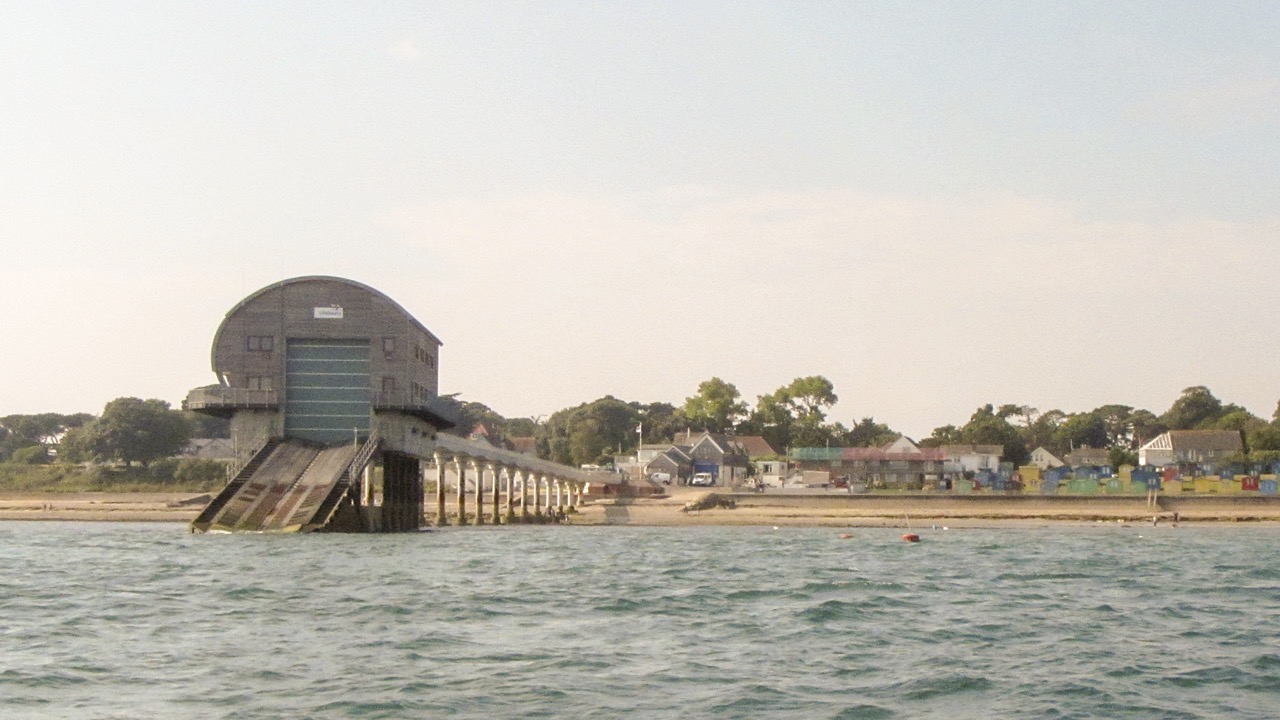 Given the wind direction it seemed a chance to visit the eastern Solent. Got up at 0300 and managed to leave at 0430, getting the rudder down once out in the river channel. With very little moon and misty weather the night felt very dark. Under Northam Bridge I was dazzled by the stern deck lights of the metal scrap ship and the Solent Guardian catamaran also had bright deck lights on. For the first time ever I left the mast down while in the river so I could stay in the cockpit and peer through the darkness. 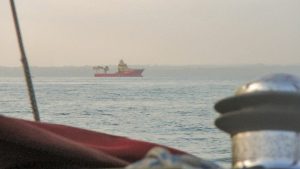 Once under the Itchen Bridge I got the mast up and continued motoring up Southampton water while I had breakfast. Looking back Southampton looked to have a well lit, interesting waterfront, except that all the lights were from the multi-story stacks containing cars waiting to be transported. By 0648 Seatern was sailing under main, mizzen and asymmetric off Chilling Beach and it was just about light enough to photograph the vessels working on the pipeline/cable to France, as also, a little further on, is the survey vessel Edda Fonn. The previously promising night-time breeze was now becoming light and puffy, and between 0745 off Lee-on-the-Solent and 0807 off Browndown I emptied the ballast tanks. 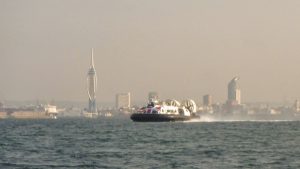 Approaching Gilkicker Point, Seatern met a yacht sailing under gunter main with apparently no one on board! Off Fort Gilkicker at 0855 I furled the asymmetric and set the jib in order to harden onto the wind. Soon after the wind increased and I started to refill the ballast tanks as a precaution. The entrance to Portsmouth Harbour was busy with a multitude of ferries. The Wightlink Ferry to Fishbourne and FastCat to Ryde used the western Swashway Channel. The Brittany Ferries Baie De Seine and, later, the Condor Commodore Clipper to the Channel Islands, used the main channel. Meanwhile the HoverTravel hovercraft, which were built by Griffon on the Itchen, went where they wished!  As Seatern passed the Mary Rose marker buoy and approached the main channel the very large, very fast Normandie Express was outbound and I spilled wind until she had gone past. 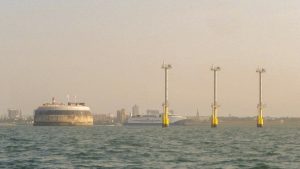 The approaches to Portsmouth now have two sets of three very large posts acting as leading lights. Apparently these are solely for the new aircraft carrier(s) and needed because the bridge is set so far to one side of the ship. One wonders how they will get on docking elsewhere! Once over the main channel the Horse Sand barrier was closer ahead than I remembered and I bore away to pass south of Horse Sand Fort. With a decent wind strength I was no longer worrying about the ebb current and set course for the Saint Helen’s Road anchorages. 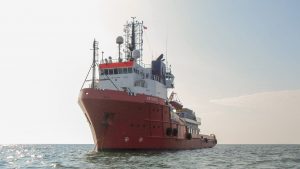 Of the anchored ships, the anchor handling tug/supply ship Artemis is apparently operated by a diving/ROV company. Since being built in 1984 she has had various names and, presumably, various owners. Once past the anchorages I needed to decide a course. 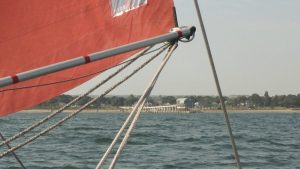 I was hesitant to head for Bembridge because it meant going some distance to leeward with the need to beat back against the eastwards current which had already set in. However there was still an adequate breeze so I bore away and allowing for the current, ended up on a run towards Bembridge for which I goose-winged the jib. 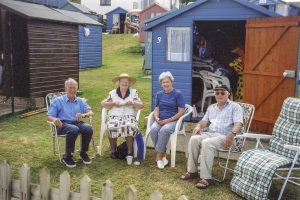 Seatern was still doing a good 4 kts over the ground and the Bembridge Ledges were fast approaching so, with Culver cliff and the “dark side” of the Isle of Wight coming into view, at 1030 I turned around for the beat back. The tide atlas suggested a back eddy west of Bembridge Harbour so I planned initially to hug the coast. Passing close in to the lifeboat station I had a good view of the beach huts (top photo). Back in 2002 (goodness!) I took my mother over to the Island and we went there with my cousin Barbara, Bryan, and their family. 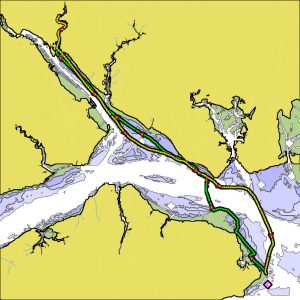 I tacked out to clear Saint Helen’s Fort and then headed along the shore keeping close in but off the area that dries given that it was near low tide, albeit, neaps. At Seaview this meant going in amongst the moorings whereupon the wind dropped! Worried about drifting into one of the moored boats I started “Dai”, my outboard, and motored out to clear the Debnigo sand bank which, together with Ryde Sands, gives some protection to the moorings from the west. So often I seem to have ended up becalmed near No Man’s Land Fort!

Once clear of the Fort I left Dai lowered while sailing on jib, main, and mizzen. Seatern was now only managing 1 to 2 kts over the ground. Skirting Ryde Sands I was able to furl the jib and break out the asymmetric. The Sands were covered but betrayed their presence when a large wake (from a FastCat?) rocked Seatern but then rose up and formed spectacular breakers only 10m or so downwind. With the sight fresh in my mind, when at around 1250 the wind dropped again, and with Seatern in danger of drifting over the Sands, I started Dai and motor sailed northwards with the idea of dodging the main flood tide by skirting the mainland shore. 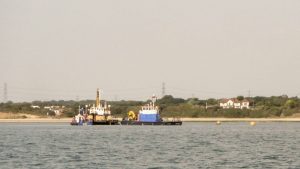 By 1320 Seatern was off Stokes Bay and sailing under main , mizzen, and asymmetric. However the wind strength was up and down and at 1426 I decided it would take too long to get back, furled the asymmetric, and started Dai. Motor sailing down Southampton Water under main and mizzen, Seatern peaked at over 5 kts over the ground. I furled the main off Netley and the mizzen off Weston. As in recent trips I dropped the mast before the Itchen Bridge so as not to have to worry about traffic on the river. Back at the jetty at 1717. It seemed like I’d spent a lot of time motoring or motor sailing, but it was not as bad as the speed plot suggests since it’s plotted against distance, not time.  Of 12.8 hours on the water, 7.4 hours were spent under sail alone. [43.9nm]