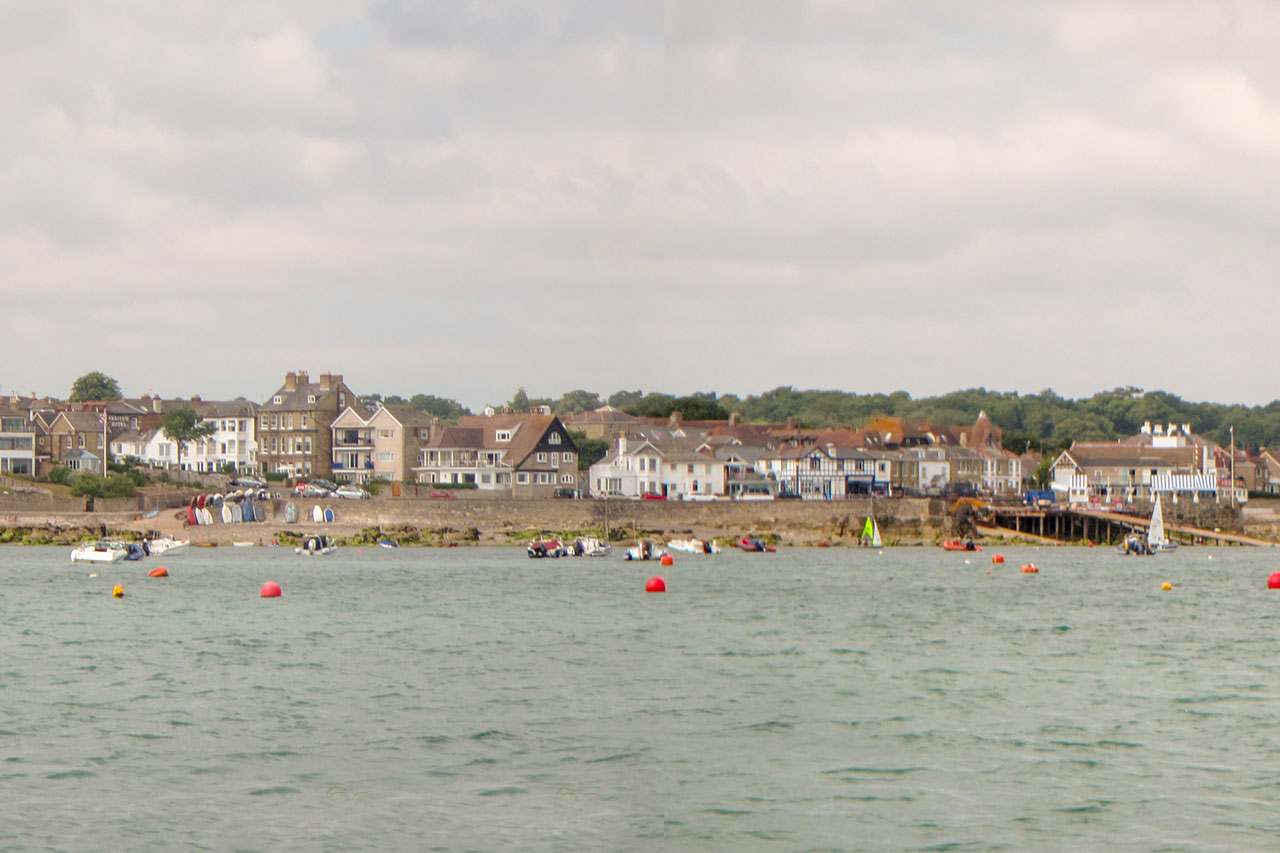 [photos from the day]

My birthday, another year has gone! I’ve sailed past Seaview a few times and thought it looked interesting. The place doesn’t get a mention in the Channel Pilot but the Solent Cruising Companion is positive although the beach is rocky and only quite exposed moorings are available. I thought I’d have a look at it from the land side by taking the ferry to Cowes and walking from Ryde. 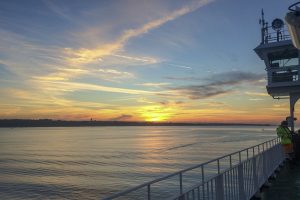 I caught the Red Falcon 0700 ferry, so saw the sunrise over Southampton Water from a higher vantage point than Seatern’s cockpit. The first time I sailed at Cowes was long ago when, as a school boy I was part of the North Wales team at the National Schools Sailing Association annual regatta held at Cannock Chase. I won an Owen Aisher Award and spent a week staying at the then Royal Corinthian Yacht Club (now the RORC Club House) and racing firefly dinghies from the Island Sailing Club. It was 1965 and Cowes, and the Medina, were so much less crowded than today. 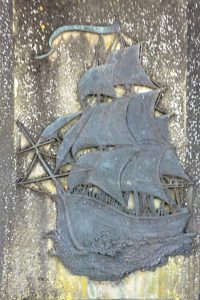 Buses from East Cowes leave from Waitrose which is close to the ferry terminal and the Ryde Bus station is on the sea front at the Pier. Walking to Seaview turned out to be a flat walk along the seafront and seafront roads. Ryde Inshore rescue is at Appley Park where, further on,  is a memorial to HMS Sirius commemorating the founding of a colony in New South Wales.

In a park at Puckpool Point there is a mortar battery but I didn’t climb up to it. The weather was now very sunny and hot for October (in the 20’s C) and I’d dressed for the cool of the morning and was now carrying too much clothing! Where ever possible I was staying in the shade. 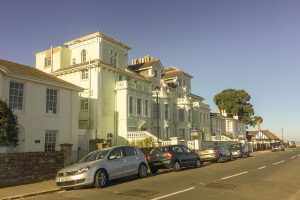 Beyond Puckpool is Springvale with a fairly new sea wall at the duver – which is apparently an Isle of Wight term for an area of sand dunes. There’s what looks to once have been a fine hotel, now with planning permission and seeking a developer to change it into apartments. Further along is a nature reserve and a row of modern holiday chalets. 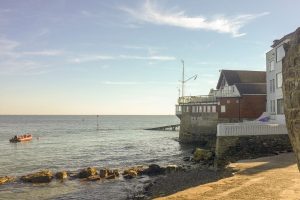 At Seaview, Nettlestone Point is dominated by the Yacht Club building. East of that is a short stretch of road with the Old Fort Cafe, which was closed. Indeed it all seemed very quiet, almost deserted. The road turns inland at the spot where in summer all the tenders appear to be stored and where, on the Ordnance Survey Online satellite photo, there appears to be a small sandy gap in the foreshore rocks. 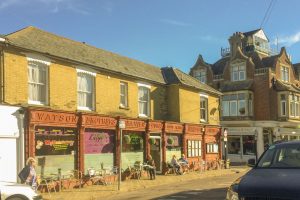 The seafront path now runs along the top of the seawall with a high wall on the inshore side. Notices said that the path through to Seagrove Bay was only passable with the tide out and I’d arrived there with the tide coming in. Had I checked the map more carefully I would have realised that it was only a short diversion inland  before coming out in the area where the Seaview Pier once existed. However I was hot and thirsty and, having checked the bus times to Sandown, searched and found a cafe where they served a good cup of coffee and a tasty slice of Victoria Sandwich! 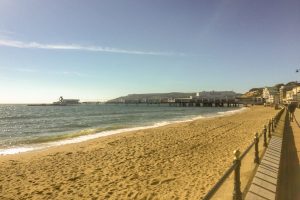 I only went to Sandown because it is on the “dark side” of the Island – the side which is turned away from me when I’m out on Seatern. Sandown Pier claims to be open throughout the year. However that only applies to the amusement arcade at the land end which reminded me of Australian casinos –  full of “pokies”. The seaward end, which might have provided some good views along the coast, was “closed for the winter”. 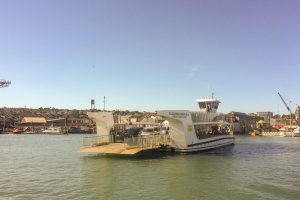 Somehow I didn’t feel like tarrying in Sandown and I took the bus back to Newport and hence another bus to East Cowes. This arrived in just time to see a ferry leave so I spent half an hour or so watching the Floating Bridge cross the Medina. Useful information: it starts it’s yellow flashing light just before leaving the shore! 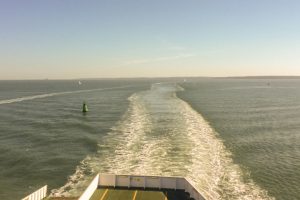 On the ferry back I noticed the wake clearly showing the current shear from one side of a slick to the other. Off Netley there were signs of a “red tide” plankton bloom, no doubt triggered by the unseasonably hot weather.

I didn’t realise that the ferry did hot meals until too near Southampton and, now craving lunch, ended up with a pasty from the Shell garage which proved surprisingly good!

[photos from the day]