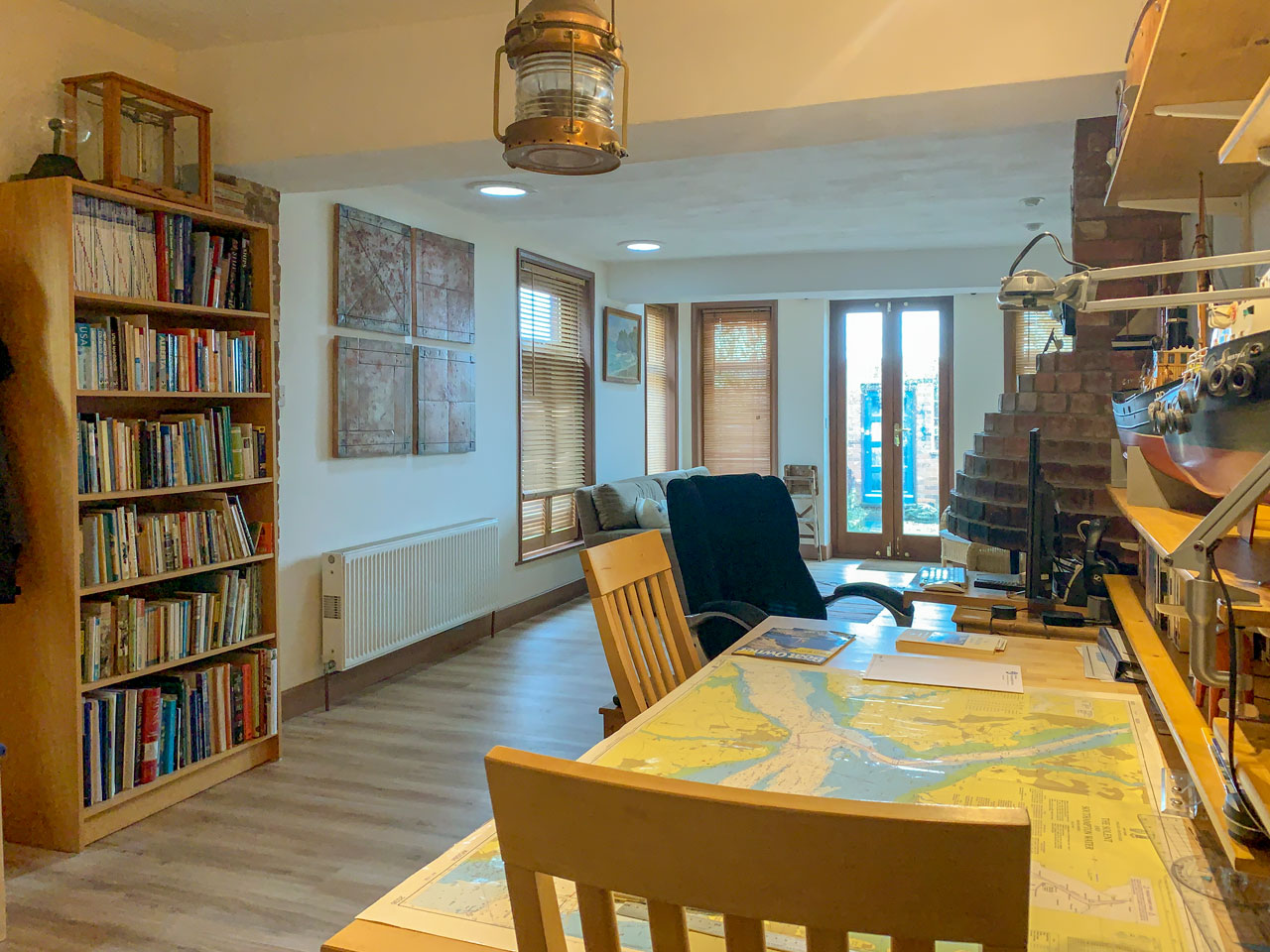 It all started with a watchkeeper at NCI Calshot Tower remarking that he had found a good painter and decorator. I’ve been meaning to get the living room decorated and the flooring replaced ever since I moved into the house in August 1996… time to act! Following an email, the painter visited on the 29th January and I arranged for him to start on Monday the 4th March having agreed to clear the room as far as possible for him to do it. That implied that, while the room was clear, I should get the floor done… but what with?

I visited “Mr H”, a local firm who supplied my upstairs carpet and after discussing the options, settled on laying a modern vinyl floor. Crucially they allowed me to borrow some of their flooring display panels to see what they looked like in the room. These were about a metre in length and made choosing much easier than the tiny 10cm square vinyl flooring samples I’d previously obtained via web sites.

Being the only main downstairs room, the living room is large, about 30′ by 12′ and clearing it took almost the whole month! The task included stripping out an overhead video projector, electric screen, and associated wiring, rewiring my TV/audio-visual cabinet ( which has mainly been replaced by a small computer!), varnishing the shelves for model boats, ripping up the carpet installed by my predecessor, filling holes in the floor boards, emptying the bookcases, rerouteing the weather station usb cable…. and so on and so on. Stupidly I didn’t take photos before I started but by the 3rd March it was ready for painting as in the photos below. 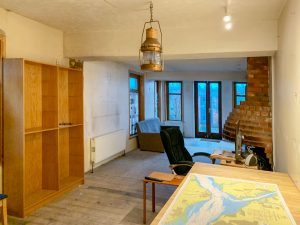 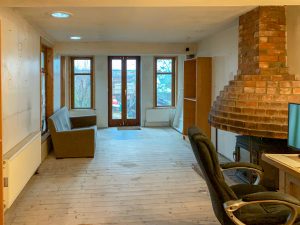 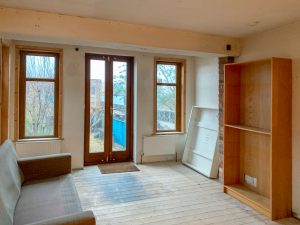 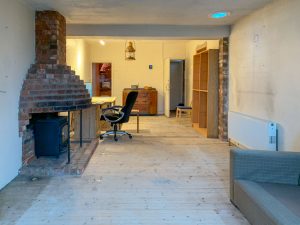 The painter didn’t arrive till late morning …but at least he turned up; always a good start! I’d expected him to take the week but he did most of it in two days! While it’s good to have it done, this was a bit too fast for my liking. For example, it turns out that he doesn’t wait the specified drying time between paint coats but puts the next coat on once the first is touch dry. Hopefully it will be OK for my inside woodwork but I wouldn’t trust him to do outside paint work and expect it to last. Also, although he did clear up to some extent, I found later that he had dry power-sanded some of his plastering, which left a fine film of white powder throughout the ground floor.

With the flooring scheduled for the coming week, the plan was for him to come back at the end of the week to fit skirting boards and possibly get them painted. During this time I could hardly move upstairs with the crates of books and the front bedroom full of model boats and things to either go to the tip (sorry, recycling centre) or to charity shops! The photos show how it was and the living room after being painted. 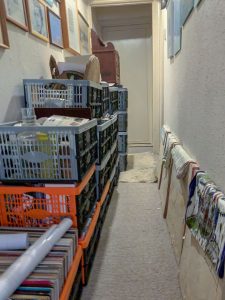 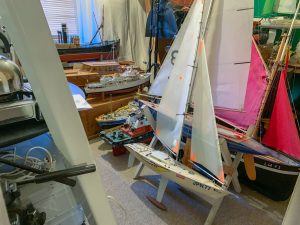 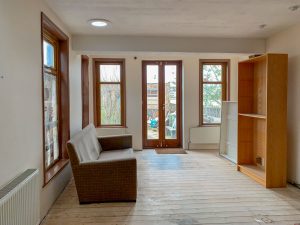 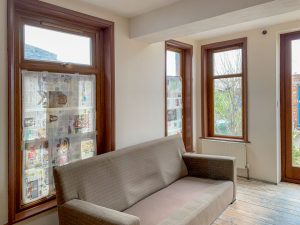 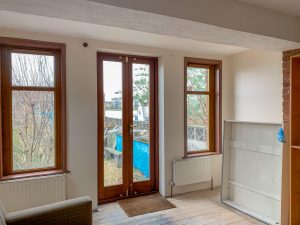 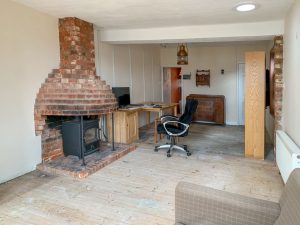 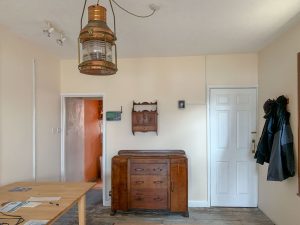 They delivered the packs of flooring vinyl on the Monday (11th March) and it was fitted over the Tuesday to Thursday lunch time. The method was to fasten down plywood sheets and then glue the vinyl to them. I waited for the painter on the Friday but he didn’t arrive – he said he’d sent me a text but I never received one. I told him that I would do the skirting boards myself. To be honest I think both I and he were relieved – I think it was a bigger job than he had allowed time for and I was happy to be in control of the process!

I used mdf skirting boards from B&Q which come preprimed and won’t warp (will they?!). There was plenty of paint left over from the woodwork. I cut them to size, painted them, and then glued them in place using CT-1 sealant/adhesive. I had bough expanding foam for the rougher bits of wall but the CT-1 seemed perfectly adequate – time will tell. The photos show the floor laid and painting and fixing the skirting in progress. 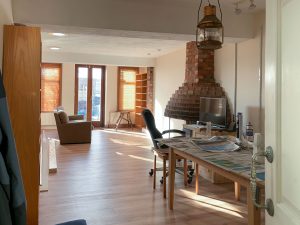 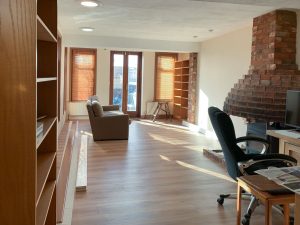 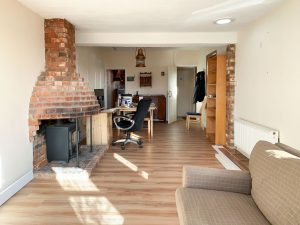 Further tasks included properly fixing the window shutters which had been simply propped in place for over 20 years! remounting my “Trophy Display” on the wall was a tricky task to accomplish single-handed. Mainly housing souvenirs of past times I wanted to keep but didn’t know what to do with, it’s not meant to be taken seriously. So “Burglars Beware” – there’s nothing of any real value in it!  Restocking the bookcases and sideboard has taken so time since I wanted to weed things out in the process. The video tapes (which took up most of the sideboard drawers), are being sorted and digitised if of interest before being throw out. Some are already becoming degraded.

So now, after taking up most of my time during the last 2 months, the end is in sight! The photos show how it’s presently looking. I’m wondering about getting a couple of rugs but I’m desperate to keep the room uncluttered! 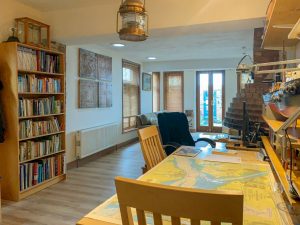 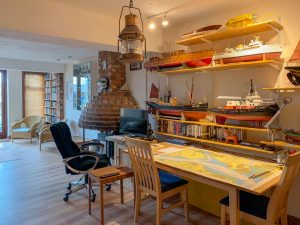 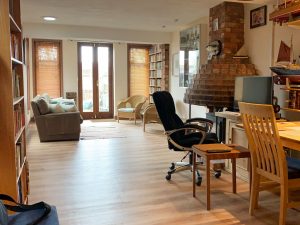 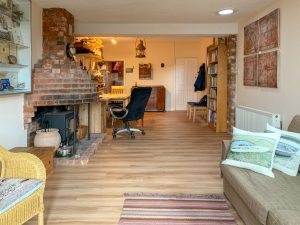