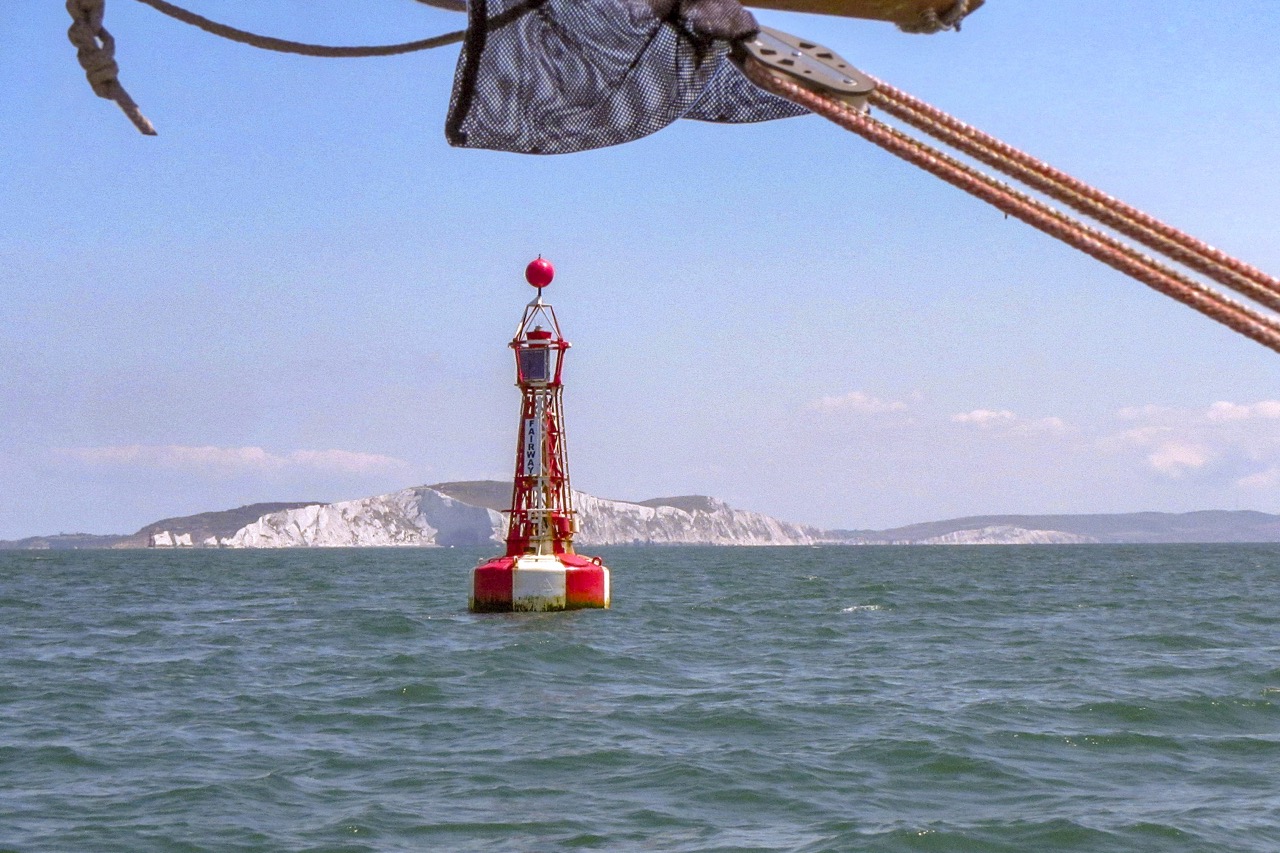 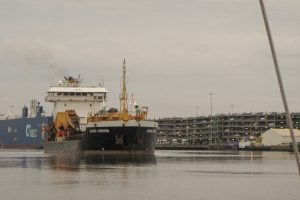 Left jetty 0520. Having gone under Northam Bridge the mast did not go up smoothly although no lines were caught – the reason was to become clear later! There was very little wind and, approaching the Itchen Bridge I thought I may as well hoist the sails, however I heard 5 blasts from the inbound dredger Sand Heron. She was a good way from me so there must have been another vessel, however I showed her my bow and moved outside the greens so that I could turn into what little wind there was as soon as she passed and hoist the main and set the mizzen. 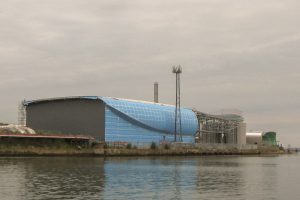 Past the Vosper-Thorneycraft development what I assume is a new sewage treatment plant has now a futuristic roof in bright blue – hopefully this is just protective covering during the build and not the permanent look!

Normally I have breakfast while motoring (or possibly sailing) down Southampton Water, however today I’d had breakfast before leaving. Nevertheless, with only fitful wisps of wind I kept Dai, my outboard, going so as to reach the westward tide in the Solent while it was still strong. 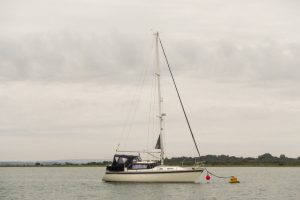 Having let the various ferries and an inbound car carrier, the Tombarra, pass by I did a “ferry glide” across the ship channel towards the moorings in Ower Bay. The Calshot Station Manager , Di, presently has her yacht on one of the moorings having come back from France via the Channel Islands.

By 0730 Seatern was past the shallows of Calshot Spit and I unfurled the jib and started sailing, close hauled. There was still not much wind and no sign of an increase. At 0730 I switched on the ballast pump and by 0811 the ballast tanks were “empty” and, of course, there was a bit more wind! 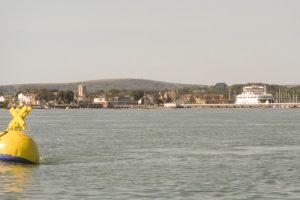 Tacking down the Solent with the ebb is rewarding! The entrance to Newtown River was reached on the first tack, the second was taking Seatern towards Lymington although I tacked early to keep the current and similarly off Bouldnor. The current was still strong but also, by 0950, the wind was freshening and I started to refill the ballast tanks. Soon after, at 0955, I decided to put in a reef – which seemed to take me ages mainly because I had not eased out enough main halyard – I need to remark it. 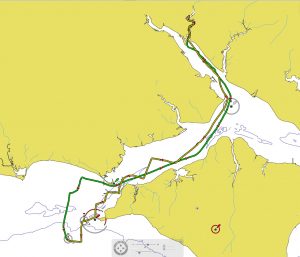 Having past though Hurst I continued the tack into Colwell Bay. I realised that there would probably be a back eddy but didn’t realise just how strong it was until tacking and finding I appeared to be heading towards Hurst Point! After that I kept well within the Needles Channel to pass first the Needles, and then the Bridge Cardinal Mark.

The promise of strong wind experienced before Hurst had not developed, I think you do get topographic effects in the western end of the Solent. So approaching the Bridge CM I shook out the reef. It was now two tacks out to the Needles Fairway buoy after which I bore away northwards with the wind on the port quarter. 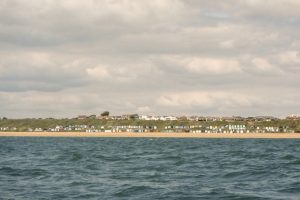 There was a (relatively) small yacht heading more directly towards the North channel and for a short time (1246 – 1255) I was tempted into doing the same. However I’d originally planned to sail along the coast so I reverted to a more northwards track until 1308 when I gybed and turned eastwards. Seatern now had the wind and seas on her starboard quarter and I had to steer since the tiller pilot could not cope. To my surprise we were over-hauling the other yacht very rapidly and by the time we were in the North Channel and passing Hurst Point at 1330 Seatern was well ahead. 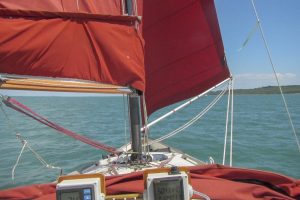 It was now a starboard tack run eastwards up the western Solent. the wind strength seemed border-line for using the asymmetric (Bramble Met recorded a strong force 4 for this time) so, for the first time ever on Seatern, I rigged a gybe preventer from the vang fitting on the boom to the lower shroud attachment. Then, running slightly by-the-lee I used the whisker pole to goose-wing the jib. Seatern was doing around 7 knots over the ground and making for Gurnard. 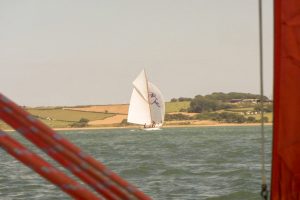 At around 1430, just before I gybed, a beautiful, classic, gaff rigged yacht set her spinnaker and the accomplished a very smooth gybe back towards Cowes – a well rehearsed crew on her!

The wind was now on the port quarter and Seatern’s speed was dropping away as we lost the flood current in skirting the Thorn Channel and entering Southampton Water. At 1540 across from the Esso jetties the wind dropped away and veered. It remained light and variable until at 1630 off Woolston I started Dai and furled the sails. I’d been helming Seatern right down Southampton Water, taking advantage of wind shifts to keep away from the shore but sometimes having to drastically bear away towards it as the wind headed us. 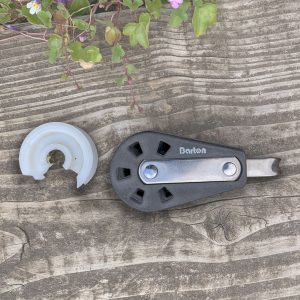 Having gone under Northam Bridge the mast seemed hard to winch back up. There was a crack and a bit of pulley wheel fell to the deck! Realising that the jib halyard block at the hounds had broken I left the mast part raised and then twice made a mess of coming into the jetty – sod’s law since there were several blokes watching from my neighbour’s jetty. They had just sold the old fishing boat and I helped them launch it – then regretted it when I learnt that the new owners were taking it round to Langstone Harbour despite being inexperienced. Fortunately I didn’t hear news of a marine tragedy over the next day or so! [total: 58.5nm]